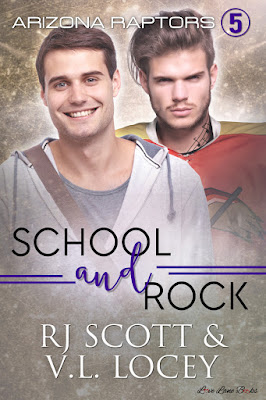 Colorado Penn is living the dream. Starting goalie for the Arizona Raptors when in season, lead singer for a hard rock band when summer rolls around. He’s the quintessential free spirit who’s making sure he enjoys all the carnal blessings of his athleticism, and gritty singing voice. Now the Raptors are moving into their first playoff appearance in years, but the arrival of an unexpected package means that hockey may have to take a backseat to something way more important. Instead of the usual undergarments from adoring fans, he finds a newborn baby with a small note tucked under her carrier, naming him as the father. He refuses to give up his daughter and is determined to be the kind of father he’d dreamed of having. But to keep Madeline, he’ll need help, and he’ll need it fast. Enter handsome emergency manny, Joseph. They may be opposites, but Colorado starts to see that Joseph’s stable, calm influence makes his chaotic lifestyle choices seem less appealing. There’s something about the man that soothes not only his infant daughter but also the wild child inside Colorado.

Joseph is one year away from getting his degree in planetary science, working cover shifts at the planetarium, and pulling in income with short term manny gigs. Stars collide as he provides emergency childcare for the wild man of hockey, a man who moves so fast through life that he doesn’t know how to stop. Homeless, and caring for his niece, Emma, fate brings Joseph into Colorado and baby Madeline’s life. Madeline is a sweetheart, and Colorado is trying his hardest to make the best decision for his baby girl. He offers his home and an indecent salary, to keep Joseph in his life until summer’s end. Colorado brings mysticism and metal to Joseph’s sanctuary of science, but somehow Joseph needs to tame this shooting star and create a family. Nothing in the contract said Joseph had to fall in love to make that happen, but when it’s time for him to leave, will the void in his heart ever heal, or will it remain as cold as space itself?

Colorado Penn is the goalie for the Arizona Raptors and he’s also a Rockstar. He’s had an interesting life and believes in living life to its fullest. He loves hockey, rock & roll and sex. The last thing in the world that anyone would mistake him for is a responsible adult ready to dawn the mantle of parenthood and guess what…they’d be wrong.

Joseph’s a science geek and he’s struggling to get his degree in planetary science and help take care of his sister Natalie and her little girl, Emma. Working at the local planetarium whenever he can helps with the finances and Joseph loves being there but when things don’t quite work out he finds himself falling back on his other love caring for children.

When Colorado suddenly finds a small baby on his doorstep with a note attached saying ‘she’s yours’, he doesn’t waste hesitate or think twice about taking responsibility for the adorable baby that’s been thrust upon him.

As much as I’ve been looking forward to Colorado’s story, I also have to admit I was a bit apprehensive going into things as to how much I’d truly enjoy this. For one rock stars aren’t really my thing but also being a hockey player mitigated that detail for me. I was also nervous that this all seemed a bit to ‘fairytale-ish’ for me and I thought maybe this will be the one…this will be the book in the ‘Railers’ & ‘Raptors’ stories that just wouldn’t make the grade. But I was also determined to give this one change I’ve read all of the ‘Harrisburg Railers’ and it’s spin-off series both ‘Owatonna U Hockey’ and the ‘Arizona Raptors’ not to mention a whole lot of other stories by these authors and they have not failed me yet so I figured the least I could do was give Colorado and Joseph a chance.

So what happened one might wonder…well…to be honest I fell in love with the free-spirited but surprisingly responsible, loving and generous Colorado and the adorable, geeky and surprisingly outspoken when it comes to what he truly cares about Joseph.

Hypothetically on paper there’s a laundry list of reasons why these two men shouldn’t really have worked but when you read their story that these two authors have collaborated to create and let your heart stay open to the possibility of them…they not only work…they’re magic.

As with previous stories the reader is also given a cast of secondary characters both enrich the story and add depth to the main characters as their relationship grows. We’re given glimpses of characters from past stories as well as meeting new characters such as Colorado’s very free-spirited grandmother, who raised him.  His bodyguard Simon, who tries really, really hard to keep Colorado on the straight and narrow, his bandmates who live for rock & roll and the next party. Joseph’s sister Natalie and her mudpie loving 5-year-old daughter that he’s helped raise and adores as much as if she were his own. And of course, the adorable baby Madeline who also happens to unknowingly be a matchmaker extraordinaire.

An ARC of ‘School and Rock’ was graciously provided by the authors in exchange for an honest review.

RJ Scott is a USA TODAY bestselling author of over 140 romance and suspense novels. From bodyguards to hockey stars, princes to millionaires, cowboys to military heroes to every-day heroes, she believes that love is love and every man deserves a happy ending.
Find RJ here: Amazon | BookBub | Facebook - Also, Never miss a release