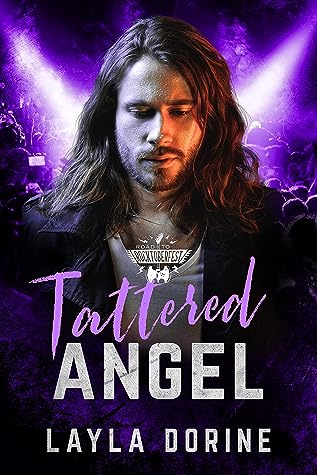 Since the moment he picked up his first guitar, Dez Conway dreamed of being a Rockstar. A multi-talented musician with the ability to play the electric violin, electric cello and even the bass, he’d be an asset to any group of musicians, if only the bands who’d hired him over the years had truly thought that way. Instead, he’s singing for the dishes in an upscale restaurant, bitter, pissed off and unwilling to entertain the offer to replace the front man of the world-famous Deviant Angels. After all, why the hell would they be any different than the guys who’d kicked him to the curb in the past?

Only…they’re not the Deviant Angels. Their longtime front man took the name with him when he left, along with their hopes of getting back on the road again and playing the music they love. Of course, a talented musician like Dez could change all that for them, if they can convince him that this time, his dreams of rock stardom, and love, can actually come true.

Raising an eyebrow at his bandmate, Riley shot him a look. “What the hell are you shushing me for when there is literally no one out here to hear us.”

“You don’t know that for sure.”

Riley looked around, spotting nothing but a tumbleweed rolling across the dusty, moonlit yard. “Unless you’re seeing something I can’t, we’re the only ones stupid enough to be out here.”

“You four chuckleheads have exactly five minutes to decide how you want to do this before I head back to the RV and leave you for the ghosts to find,” James huffed, lugging the drum bag that contained Damien’s kit.

“There will be no more talk of ghosts until we’re all away from this creepy ass place, if you don’t mind,” Riley complained, trying to imagine a setup that would convey the ominous eeriness they were hoping for with this video.

Zakk, meanwhile, headed straight for the steps. “Okay, I think we should set up on the porch or in the entryway since the moonlight is streaming right though the broken windows.”

“And I’m going to suggest you keep your asses off of and out of a potentially unstable structure before a floor gives way and sends you idiots crashing through to the basement,” James barked, setting the drumkit down.

“And porch it is.” Zakk remarked.

“How about ground, why not stick with that, huh?” James countered.

Looking between them both, Riley shrugged. “Maybe check the porch first and then we’ll set up, if it’s safe.”

“Hello, have you all suddenly gone dead? Have I gone invisible?” James growled, looking down at himself.

“Relax James, it’ll be fine. Dez will just go up and see if it holds weight, he’s the biggest, so….” Riley began.

“Oh hell no. You wanna know if that porch will hold us all then you take your skinny ass up there and jump on it.”

“I’ll do it,” Zakk declared, bounding up the steps. Several jumps and the creaking of a few boards and there was still some lingering doubt that it was truly stable.

“What if we set Damien and the drums on the porch and the rest of us on the steps and ground in front of it. That way, you can still capture him in the video and all of us have plenty of room to move around?” Zakk suggested.

“Fine, but if an ER trip needs to be made tonight, then I’ll be singing I fuckin’ told you so, all the way to the doors,” James declared as he carried the kit up the stairs and started setting up while Zakk began positioning the video cameras.

Urgent, frantic hooting proceeded a large shape swooping skyward, dust and the tinkle of broken glass shards drifting down from the ledge above the doorway.

“And on that note….I’m sufficiently freaked.” Riley muttered, staring around as everyone else calmly continued to get ready for the video shoot. Dez even shrugged at him like nothing had just happened.

“Was just a great horned owl, judging from the size and the hoot anyway.”

“How the hell would you know what kind of owl it was?” Riley demanded to know.

“Koda and I did an owl walk last year. He wanted to take pictures so he could draw shifter variants of them and I just wanted to spend time with him, so it was win, win.”

Okay, now Riley was confused. “Shifter….variants, I don’t get it.”

Dez opened his mouth to answer, but Damien beat him to the bunch “It is the art of taking human and animal characteristics and blending them to create a form of were-creature.”

“Sounds pretty cool to me,” Zakk added, settling the last camera and tri-pod in place.

Dez was working steadily on positioning the electric violin stand right beside his guitar one so he could switch instruments easily, even as he continued telling them about his friend’s designs. “He’s even done some crossover steampunk themed stuff too. If I ever have the opportunity to introduce him to Nash I can’t even envision the unique array of creations they’d spawn. They’ve both got this knack of blending the organic and inorganic to create something spectacular. I’d love to have them collab on my next tattoo.”

“I would be more interested in this were-owl drawing, as that is something I could see having tattooed on my back among the other feathered folk who adorn me.” Damien remarked.

“I’ll talk to Koda, see if I can get him to send me the jpgs so you can take a look.”

“For now, how about you two stop discussing owls and get plugged in, see what else we can scare outta the rafters,” Zakk muttered.

Dez’s response was to play a series of cords that sounded an awful lot like a revamped intro to Bedlam and Disaster, a song they’d been working on for the past two days. Loud, chaotic and destined to get the moshers headbanging like it was 1991, it still needed allot of tweaking yet.

Riley turned at the sound of frantic flapping and hit the dirt as several bats winged it over his head, making a beeline for the surrounding forest. Spitting out dust and grateful he hadn’t been carrying any equipment, he turned to glare at Zakk, who’d dove a few feet away and now sat dirt streaked and chuckling at him.

“You just had to say something about the rafters, didn’t you?”

“Look on the bright side, chances are we’ve got the place to ourselves now,” Zakk shot back.

“Then let’s quit dicking around, get this video shot and get out of here before something goes wrong…” James declared.

“What could possibly go….” Dez began.

“Don’t say it, don’t even think it…just get set up and sing!” Riley snapped, to which Dez, that shit, smirked, gave him a mock salute, set up his mic, and shredded out a scathing riff accompanied with impromptu lyrics.

Shambling shadows on a hazy night

Fusing Damien to those silver drums

“Yes!” all of them bellowed back, laughing as Dez feigned a mock bow. One thing had come from discovering their new singer. The band was having fun and laughing again, which was better than six months ago, or even a year before Wade had quit.

But at least now Riley could look around at the smiling faces of his bandmates and for the first time feel like Wade had actually done them all a favor.

Layla got hooked on writing as a child and she hasn’t stopped writing since. Hard times, troubled times, the lives of her characters are never easy, but then what life is? The story is in the struggle, the journey, the triumphs and the falls. She writes about artists, musicians, loners, drifters, dreamers, hippies, bikers, truckers, hunters and all the other folks that she’s met and fallen in love with over the years. Sometimes she writes urban romance and sometimes its aliens crash landing near a roadside bar. When she isn’t writing, or wandering somewhere outdoors, she can often be found curled up with a good book and a kitty on her lap.