Blogtour: Rescue You by Elysia Whisler 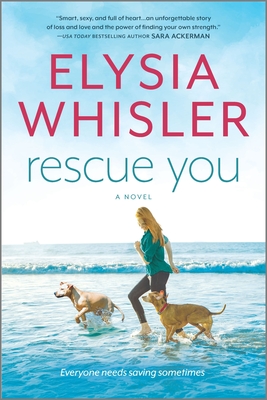 She needs a fresh start. He’s got scars that haven’t healed. With the help of some rescue dogs, they’ll discover that everyone deserves a chance at happiness.

After a year of heartbreak and loss, the only thing keeping Constance afloat is the dog rescue she works at with her sister, Sunny. Desperate for a change, Constance impulsively joins a new gym, even though it seems impossibly hard, and despite the gym’s prickly owner.

Rhett Santos keeps his gym as a refuge for his former-military brothers and to sweat out his own issues. He’s ready to let the funny redhead join, but unprepared for the way she wiggles past his hard-won defenses.

When their dog rescue is threatened, the sisters fight to protect it. And they need all the help they can get. As Rhett and Constance slowly open up to each other, they’ll find that no one is past rescuing; what they need is the right person—or dog—to save them.

Constance slammed on her brakes. Steam rose from the street as rain gurgled through the ditches. She killed the engine, stepped into the pattering droplets and scanned the shoulder of the road. Nothing there but the remains of a goose carcass. “Where are you, boy?” Constance gave a low whistle.

It hadn’t been her imagination. The picked-over goose only made her more certain she’d seen a dog, weaving through the foggy afternoon air like a phantom. A lost dog, with his head bent against the rain as he loped along the muddy ditch.

Constance whistled again. Silence, but for the sound of rain hitting the trees that lined the road. “Maybe I’m just tired.” She’d done a lot of massages today, which made her feel wrung out. Constance almost ducked back into the van, but halted.

There he was: a white face with brown patches, peeking at her from behind a bush. “Hey, boy.” Constance squatted down, making herself smaller, less threatening. The dog watched, motionless. Constance drew a biscuit from her coat, briefly recalling the cashier’s amusement at the grocery store today when she’d emptied her pockets on the counter, searching for her keys. Five dog biscuits had been in the pile with her phone, a used tissue and the grocery list.

“Something like that.” More like dog aunt, to all of the rescues at Pittie Place. Her sister, Sunny, had quite the brood.

Constance laid the biscuit near her foot and waited. A moment later, the bush rustled and the dog approached. He had short hair and big shoulders. He got only as close as he needed to, then stretched his neck out for the prize. As he gingerly took the biscuit, Constance noted a droopy abdomen and swollen nipples, like a miniature cow.

So. He was a she. Constance inched toward her. The dog held on to the biscuit, but reared back. Constance extended her fist, slowly, so the mom could smell her. “You got puppies somewhere?”

The dog whimpered, but crunched up the biscuit.

“Where are your puppies?”

The dog whimpered again. Her legs shook. Her fur was muddy, feet caked with dirt. She had blood on her muzzle— probably from the dead goose. By her size and coloring, Constance decided she was a pit bull.

Constance rose up, patted her thigh and headed toward her van. She slid open the side door, grabbed a blanket and spread it out, but when she turned around, the dog was several yards away. Her brown-and-white head was low as she wandered beneath a streetlamp, the embodiment of despair in the drizzle that danced through the light.

Constance followed, slipping on the leaves that clogged the drainage ditch. The dog glanced once over her shoulder, but her pace didn’t quicken. Constance decided her calm demeanor was working, keeping the dog from fleeing. And let’s be honest: the biscuit hadn’t hurt. Chances were, the dog would be happy to have more as soon as she got wherever she was going. “Let’s see where you’re headed, then. Show me if you’ve got a home.”

Constance followed her across the road, around the curve and down the narrow lane. Frogs popped like happy corn all over the slick street, but the chill of the oncoming winter slithered through Constance’s blood.

She followed the dog for a good quarter mile. Even before she hooked a left down the unpaved road hidden behind the trees, Constance had figured out that the mama was headed to one of the handful of empty places that sat decomposing on the hundred or so acres the Matteri family owned. Constance paused only long enough to squelch the sizzle of anger that bubbled up inside before she pressed on, determined to know if the dog was a stray or a neglected mother from Janice Matteri’s puppy mill.

Constance took the same turn and watched as the dog neared the abandoned house up ahead. Nobody had lived there in years. It was only a matter of time before it became condemned. The dog bypassed the crumbling porch of the old colonial and went around back. Constance knew little daylight was left, and she hadn’t brought a flashlight. She broke into a trot, clutched her coat tighter around her and didn’t slow until the dog came back into view. Constance followed her, her heart thumping harder with each step.

The dog passed the rusted chain-link fence and disappeared over a rise in the property, near an old shed so overgrown with trees it was only recognizable by a pale red door. Just as she reached the hill, Constance heard a squeak. The sort of high-pitched noise that echoes from everywhere and nowhere all at once. Another squeak came. And another. She crested the hill and saw the dog slink inside the shed door. Constance got to the shed and pushed inside. The dog had reached her destination: a battered old mattress, three shades of brown, lying a few feet inside. The mewls, now loud and hungry, came from a shredded section of the mattress.

Constance narrowed her eyes. At first, she counted only two bobbing, brown heads, but as she drew closer there was a third. Then a fourth. The last one didn’t move nearly as much, just sort of waded on his stomach. The puppies had cocoa-colored fur and black muzzles. Eyes open. The ones that moved didn’t really walk, just stumbled into each other, like drunks. Mama dog curled around them and they all wiggled toward her abdomen.

Constance knelt down next to the mattress and watched the suckling puppies. She decided they were about two weeks old. The air in the shed smelled of sour milk, poop and urine. She dug out another biscuit and reached, slowly, her hand in a fist to protect her fingers, her gaze on the mama for any sign she was upset, such as pinned ears, bared teeth or a raised ridge of fur down the back. The energy around the mom and her pups was calm, to the point of exhausted. Constance had certainly helped with enough of Sunny’s dogs over the years to know. She offered the biscuit and the mom took it. With her mouth busy, Constance carefully touched the smallest puppy, who shook so hard the tremble came from deep inside, beneath his skin and fur, straight from his bones.

Constance rose slowly and did a quick search of the vicinity for more puppies, which turned up nothing but trash, vermin and an old orange crate, which she brought over to the mattress.

Now to see if Mom was going to accept help.

Though daylight was precious, Constance waited until the pups were done suckling before she offered a third treat. “Let’s go back to my place,” Constance said as Mom accepted the biscuit. “My sister has a rescue for critters, just like you. And I help her all the time. You’ll be safe there. Does that sound okay?”

While Mama crunched, Constance reached for the two pups closest to her and, keeping an eye on Mom the whole time, she lifted them and settled them in the crate. Mom’s chewing quickened, so Constance acted fast, lifting the last two pups swiftly but carefully. She rose to her feet, crate in her arms. The mother dog was on her feet almost ahead of her, pointing her muzzle at the crate and whining.

Constance knew the mom would follow her anywhere she took those pups, but she also lacked any signs of aggression, almost as though she knew that this was their only chance. Or as Pete, owner of Canine Warriors and Constance’s longtime childhood friend, would put it, “You just got something about you, Cici. Everybody trusts you. People. Dogs. The damn Devil himself.”

Constance headed back to her van, chasing the sunset. As expected, the mother followed. Once to the vehicle, Constance opened the van and set the crate full of pups next to the blanket she’d spread out earlier. The mama dog leaped in after them.

Constance slid the door closed, settled behind the steering wheel and let out a great sigh. Mission accomplished. She edged down the long, lonely road. The rain pattered on the windshield and the scent of dirty puppies hit her nose. She’d take them home tonight and get them settled in, see how they reacted to a new environment, then text Sunny in the morning. Constance had worked with enough dogs, and people, to know that introducing another new person this evening was bad news. Let Mama get used to Constance first, and get some good food and rest, before she was moved to Pittie Place.

Tonight, at least, this girl and her babies belonged with Constance.

About the author:
Elysia Whisler was raised in Texas, Italy, Alaska, Mississippi, Nebraska, Hawai'i and Virginia, in true military fashion. Her nomadic life has made storytelling a compulsion from a young age.

She doubles as a mother, a massage therapist and a CrossFit trainer and is dedicated to portraying strong women, both in life and in her works. She lives in Virginia with her family, including her large brood of cat and dog rescues, who vastly outnumber the humans.