Blogtour: Home For The Baby's Sake by Christine Rimmer 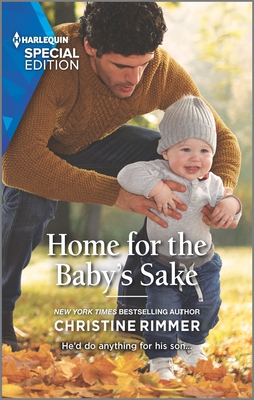 He’d do anything for his son…including returning to the town he left behind.

Valentine Bay’s the perfect place for real estate developer Roman Marek to raise his infant son. But when he snaps up the charming local theater, he doesn’t bargain for tempestuous director Hailey Bravo. Hailey won’t let Roman wreck the thing she holds most dear—and she’s certainly gotten under Roman’s notoriously thick skin. As the duo spar and sparks fly, Roman’s surprised to find that Hailey’s the perfect missing piece for his family. But how can he convince her that this partnership’s for keeps?

When she arrived at the fish place on Ocean Road, Roman was waiting outside for her, leaning against a sleek black sports car—the famous one made in Italy, with doors that opened upward, like wings.

“This car,” she said, shaking her head, trailing a finger along the gleaming hood. “You’d better write the arts council a check, Roman Marek.”

He put his hand to his broad, hard chest, right over his heart. “You have my solemn word on that.”

They went inside. The food was excellent, as always, and being with Roman was easy and fun. Even the silences were comfortable. He said he’d moved back to town from Las Vegas and bought a house on Treasure Cove Circle. Hailey knew the house. It was a mansion nestled in its own private oceanfront reserve, surrounded by beautiful old-growth forest, overlooking a secluded stretch of beach.

“I want to see you again,” he said as he walked her back out to her car. She gave him her number and when he gathered her close, she didn’t resist.

The kiss was just right, a tender, sweet getting-to-know-you kind of kiss. His lips felt so good brushing against her own, and excitement sizzled through her. They both pulled back slowly and just stood there at the driver’s door of her Kia Sportage, grinning at each other for a long string of lovely seconds.

“See you soon,” he said as he pulled open the driver’s door for her.

She climbed in and he shut the door. Then he stood there, the afternoon sun gleaming on his dark brown hair, as she backed from the parking space and drove away.

For the rest of the day, Hailey felt like the living, breathing representation of some old romantic song. She walked on air and danced on clouds. She’d met a guy she wanted to see again. That hadn’t happened since Nathan.

She couldn’t stop smiling as she sat at the kitchen table in the family cottage she shared with Harper and worked on her plans for the Christmas show—which desperately needed an actual name. Later in the afternoon, she was back at the theater, greeting the parents as they dropped off their children for Fall Revue rehearsals.

It was the usual circus, corralling all the kids, giving them instructions that they immediately forgot. There was some pushing and one of the little girls cried. Hailey consoled and coaxed and loved every minute of it—she always did. But somehow, more so today.

Because she kind of had butterflies over Roman Marek, and for three long years she’d honestly believed that all her butterflies had shriveled up and died.

A New York Times bestselling author, Christine Rimmer has written over ninety contemporary romances for Harlequin Books. Christine has won the Romantic Times BOOKreviews Reviewers Choice Award and has been nominated six times for the RITA Award. She lives in Oregon with her family. Visit Christine at http://www.christinerimmer.com.
Find out more on her website.
Promotional post. Materials provided by the publisher.