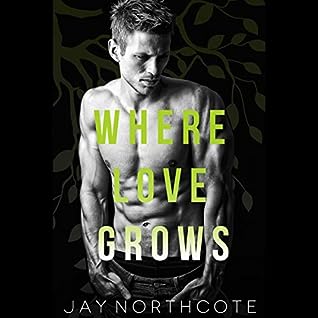 Stephen’s home, deep in the heart of the Welsh valleys, suits his reclusive nature. However, as he recovers from illness, he’s struggling to manage alone. As nature reclaims the land he’s poured his heart into cultivating, he becomes increasingly unhappy. His only outlet is his blog, where he documents the decline of the garden that had been his pride and joy.

Luke is more used to a concrete jungle. He was a high-flyer, living and working in London, until addiction sent him into free fall. Now on the road to recovery, he still wants to make some changes, but he’s unsure where to find the purpose and fulfillment he craves.

This book is a standalone read with a satisfying happy ending.

I wasn't sure about this one going into things and that really had very little to do with the actual story. It was more about the fact that this is an age gap story and lately for me that trope seems to be getting done to death, but it's Jay Northcote and I just can't seem to say "no" to the opportunity to listen to one of his stories on audio and I'm glad I caved on this one.

Yes, 'Where Love Grows' is an age gap story but it's also a lot more. It's second chances, starting over, finding love, finding yourself.

When a friend from college calls Stephen with a request. Stephen's first response is no. There's no way he's going to have a stranger staying with him, even if he could use some help taking care of his home as he recovers from his recent illness. But then again maybe he does...maybe, a second set of hands could help return his gardens to their former glory...maybe...

Luke's a city boy and he wouldn't know a Dandelion from a Daisy but getting out of the city might be just what he needs as he fights his way back from depression and really it's just for a week and then they can scrap the whole experiment and he can return to the city where he belongs.

Both Stephen and Luke won me over. I loved the slow burn as these two men went from total strangers to friends, to friends with benefits, and ultimately becoming lovers. Both men had their own reasons to proceed with caution but proceed they did...one step forward and sometimes with two steps back.

Neither Stephen nor Luke is looking for any kind of commitment and it's Stephen's love of the outdoors that helps Luke to find his own passion for gardening and ultimately leads them to a 'mutually beneficial arrangement' that just like Stephen's gardens begins to grow into something more.

I was enchanted with the relationship development between these two men. It was real and there were struggles and conflicts to be overcome as well as moments of tenderness and passion. Seeing Luke discover the beauty of nature and the peace that it seemed to bring him ultimately helped Stephen's heart to heal as much as it did Luke's.

Once again Hamish Long has given voice to the author's characters creating a truly enjoyable listening experience and making it such an effortless task to visualize these two men as they meet and their relationship grows over a summer spent in the English countryside.

I don't think I enjoy anything more when it comes to a love story than one that leaves me feeling like it could really happen. I don't need sunshine lollipops and fairy godmothers in my love stories what I need is real people, living real lives, finding real happiness as they face life's challenges together.