Blogtour: The Last Man She Expected by Michelle Major

The Last Man She Expected 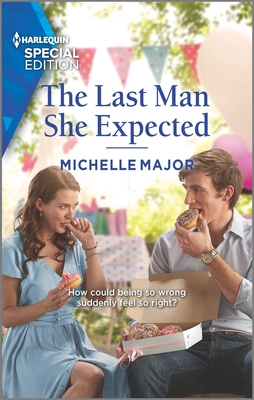 How could being so wrong suddenly feel so right? Falling for her arch nemesis Isn’t going to happen.

Moving to Starlight was Mara Reed’s first step forward after her devastating divorce. But had she known she’d find Parker Johnson, her ex-husband’s ruthless divorce attorney, there, she might have gone in a different direction. Away from the big city, Mara is seeing Parker in a new light—but is it enough for her to set aside her anger?

“Come to finish me off?” he asked as Mara Reed walked into the room.
She sniffed. “How’s your head?”
He removed the bag of peas, tossing them to the top of the dryer. “I’ve taken harder hits.”
“Not that I meant for you to fall, but I can’t say you didn’t deserve it,” she told him, crossing her arms over her chest.
He raised a brow. “That’s an interesting way to apologize.”
She gave a humorless laugh. “I’m not here to say sorry.”
Parker felt his mouth drop open. “You practically pushed me out of the bounce house.”
“Not quite. You grabbed for me and I evaded you with my catlike reflexes. Is it my problem that you’re clumsy?”
He had to admire her moxie. The moment had happened so fast, but he was pretty sure she’d given him a tiny shove when he stumbled. Not that he’d throw her under the bus by telling anyone. “If you didn’t seek me out to apologize, why are you here?”


“You took everything from me,” she said instead of answering, her husky voice laced with bitterness.
“Your anger is misdirected,” Parker said, shifting under the weight of her stony glare. “I’m not your ex-husband.” He’d represented hundreds of clients over the years, but this was the first time he’d actually been confronted outside the courtroom. He didn’t like the way Mara Reed made him feel, as if he’d been the one to cause the destruction of her marriage.
“No,” she agreed, her hazel eyes giving him a slow once-over. Despite her obvious dislike of him and the obstinate set of her heart-shaped jaw, there was no denying Mara’s beauty. She had dark hair with a few hints of burnished gold highlighting it and pale, luminous skin that would have inspired the finest Renaissance painter.
She was taller than average, something he’d al-ways appreciated in a woman given that he stood well over six feet. She’d fit perfectly with him, a thought that almost made him laugh for its absur-dity. He couldn’t imagine any scenario which would make Mara want to be close to him.
“You made it possible for him to destroy me,” she said, her voice oddly devoid of emotion. He wanted to deny it, but the truth was he couldn’t remember the details of her case, especially since she’d been Paul Reed’s much younger third wife. He’d already been twice down that road with his client. It was a mental trick he employed, not allowing himself to see the opponent as a person. Mara Reed had been a name to him, an entity he’d set out to take down like he was a remote-control drone zeroing in on a target.
“It wasn’t personal.”
She flinched, and he wanted to take back the words. They were simple enough as part of his job, but he imagined they felt like salt dumped into an open wound to Mara. Despite his now pounding headache, he didn’t mean to hurt her. He understood what he did for a living and had come to terms with the man he’d become as a result, even if he didn’t always like himself because of it.


“It was to me,” she whispered and walked away.

Michelle Major grew up in Ohio but dreamed of living in the mountains. Soon after graduating with a degree in Journalism, she pointed her car west and settled in Colorado. Her life and house are filled with one great husband, two beautiful kids, a few furry pets and several well-behaved reptiles. She’s grateful to have found her passion writing stories with happy endings. Michelle loves to hear from her readers at www.michellemajor.com.
Website | Twitter | Facebook | Instagram