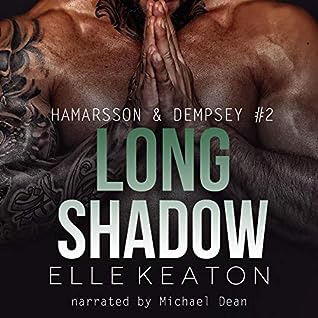 Will a killer destroy everything before Niall realizes they are stronger together than apart?

Long Shadow is a dual POV about a broody introvert and a somewhat patient Sheriff. Mat will have to prove to Niall he's the man for him. The Hamarsson and Dempsey series follows the same couple as they find their way to their happily ever after.

“Long Shadow” is the second book in new to me author Elle Keaton’s ‘Hamarsson and Dempsey’ series...

and in some ways I found it very different from the first one…mainly in that the story didn’t feel quite as dark as the first one but still it was every bit as interesting.

Here in ‘Long Shadow’ we get the answers to some of the events that transpired in the first story and we get some serious heat between Niall and Mat as these two men do their own romantic dance that neither of them seems to really know the steps to but Mats a patent man and he’s learning when to lead and when to let Naill have a turn…so there’s always hope.

When most of Mat’s deputies come down with the flu leaving Mat seriously overworked especially with the local arsonist turning up the heat then add to this the fact that Mat suddenly finds he’s sharing his childhood home with not just his mother…leaving both Mat and Niall to wonder now they’ll ever make things work.

It’s not until unforeseen events force Niall to examine what Mat really means to him that things truly begin to change and Niall is forced to examine his life choices, most importantly those surrounding his relationship with Mat. Leading him to the realization where Mat’s concerned it isn’t about what he deserves it’s about what he wants.

I was gifted with the first audiobook in this series a while ago and I loved it…start to finish it had me as a fan. So, when the chance to listen to and review the second book in this series present itself to me…well…that was a no brainer.

While the crime part of these stories felt solid and definitely helped to add interest. It was the interactions between Mat and Niall that held my interest and kept me wanting more and what comes next and oh please could we just get them on the same page…well, here in ‘Long Shadow’ we did or mostly they’re on the same page.

For as much as I liked this one between the end and the epilogue felt a bit short changed and I would have really liked a bit more filling in on some of the details that lead to the events of the epilogue. Was it crucial to the story? Probably not and I admit I don’t really feel like I was missing anything so much as greedy me just wanted a bit more of what I got.

We are once again given Michael Dean for the narrator. I enjoyed his efforts in the first book and found this one every bit as enjoyable maybe more so in that it’s always nice to have the consistency of characters maintaining the same voice as I’ve become use to from story to story. So needless to say I’m looking forward to the next book in this series in audio format of course and I’ve got fingers crossed that once again Michale Dean will be providing the voices of these two interesting men.

An audiobook of “Long Shadow” was graciously provided by the author in exchange for an honest review.