The story ends in a cliffhanger. 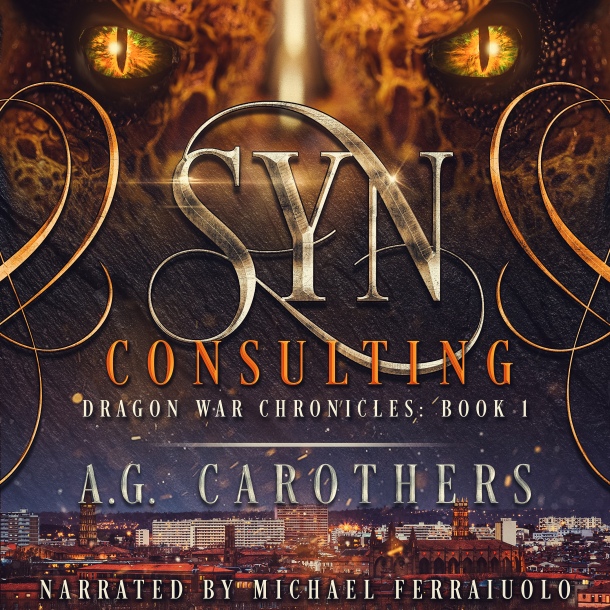 Continue to hide or help save the very kin she's hidden from?

Welcome to SYN Consulting, the top business strategy consulting firm in Europe, home to a motley crew whose leader has a life changing secret. CEO, Danica Lestrange, is the first female dragon born in the last 800 years. Hidden from the rest of her kin and raised in the human world, she built a life that she would defend until her death.

A devious plan is unearthed while working on a new business deal that could plunge the dragons into another war with the humans. The humans may have forgotten the last dragon-human war, but the dragons have not. Will the war reveal this hidden world to the humans, or will the clans come together to defeat their enemies and maintain their anonymity?

Danica must gather her allies and help the very dragons she's hidden from her whole life. She can only hope that she'll be strong enough to protect her chosen family.


This is the first book in a new series about dragons who want nothing more than to live in peace, but refuse to be subjugated. In war there's also love, and love is blind. Love doesn't care about gender, race, species (in this case), or sexuality.

Attention: This book contains explicit sexual content between consenting adults. The sexual scenes are MM, MF, and MMF. There are romantic relationships depicted that are MM. There is also a high level of explicit language, snark, kink, and possibly bad puns and fart jokes.

This book ends in a cliffhanger.

Dragon War Chronicles is a continuous series. It is best read in order.

I have to admit, I read “Dragons, Michael Ferraiuolo” and that was all I needed to get my attention and quite honestly…I regret nothing! Not even the nail biting, heart stopping, cliff hanging ending in this first book of A. G. Carothers series the “Dragon War Chronicles”.
A. G. Carothers is a fairly new to me author, having only listened to one other audio book by this author that for me ended up being just okay, I ended up not being very excited about things, unlike “Syn Consulting” which has totally left me in a dither of the best kind as I am more than anxious to find out what’s going to happen next to this collection of interesting and unique characters.
Michael Ferraiuolo has been a favorite of mine when it comes to narrators from the first time I heard his voice and in “Syn Consulting” he more than proves why with the range and diversity of the voices that he’s able to provide throughout this story as always his narration was solid and his efforts only added to my enjoyment of the book.
“Syn Consulting” is a step outside of my reading norm, which in many ways is neither here nor there since I like to occasionally challenge myself with it comes to my reading choices. The part that’s unusual is that there is a m/f relationship at the center of this story and for those who don’t like to have their MCs involved with others you might not find this one to your liking so, I’m not saying don’t read/listen to it but I am advising caution if any of this is a deal breaker for you. As far as the relationship dynamics go…all I can really say is everything is early days for this story. From the relationship between Danica and Zander to the relationships between Danica and/or Zander and the rest of their found family.


“Syn Consulting” is in no way your typical romance and frankly, I think that going into this story with that as an expectation, will very likely lead to disappointment for most readers. I know it would have for me.
But as soon as I saw the word ‘Dragon’ I did what I try to do with any book that’s of the paranormal, fantasy, shifter, mythical nature I set aside my limitations on what’s real or possible and I let my moral compass have a vacation because for me it’s hard to say that it’s ok to have people turning into dragons or bears or whatever and flying around but Hey! they can’t be in love with more than one person and they adhere to present day morals and values, when fact is the story is fiction and both the world and it’s ethical constructs have no relationship to what exist now. If the dragons are allowed to fly than I need to adjust my expectations on all things in order to fully enjoy all aspects of a story…but I’m talking about me and I also believe that we each enjoy a story how it best works for us.
I found that one of the best parts of this story, aside from the narrator, was the world building. It’s earth but it’s not the earth that we know this earth has things that stories are made from dragons & shifters and the wars that have ensued between them and mankind. I was more than a bit impressed with the connection between dragons and other shifters of this world, it’s definitely different from other stories that I’ve read and while it’s different what it’s not is complicated or difficult to understand.
As well as the world building, I loved that one of the strongest and most fierce characters was Danica LeStrange…a woman, who knew? Ok seriously, it’s not there aren’t other books with strong female least or that men can’t be awesome and dynamic characters it’s just that they get to be more often than women, so when a story comes along with a female in that role it’s refreshing. Add in the fact that Danica’s also a dragon and you’ve got one kickass female MC.
“Syn Consulting” is the beginning of the series so it’s got a big job to fulfill in that this is the story that lays the groundwork for everything that will come next and while I’m not normally a fan of being left hanging over a cliff it this case I’m willing to accept this because I think if we’d been left anywhere else the author would have to compromise the quality of how this part of the story gets resolve and for me that would have been unfortunate.
On the upside the next book is available, so if you’re not willing or you prefer to read the story rather than listen to the narrations of Michael Ferraiuolo as I have chosen to do…there’s always the book…in fact there’s always books 2, 3 and 4 available to fuel your love of dragons.
*************************


An audio book of “Syn Consulting” was graciously provided by the author in exchange for an honest review.

A.G. Carothers is actually a dragon very cleverly disguised as a human. They are a non-binary author of LGBTQIA Romance and Urban Fantasy, who enjoys writing original and entertaining stories. They are very excited to share the worlds they've created with you.

A.G. currently lives in Tennessee with their platonic life partner, who is not a dragon. They yearn to live back in Europe and will some day. In their spare time they are addicted to losing themselves in the lovely worlds created by other authors

A.G. is committed to writing the stories they see in their head without restrictions. Love is blind and doesn't see gender, race, or sexuality. 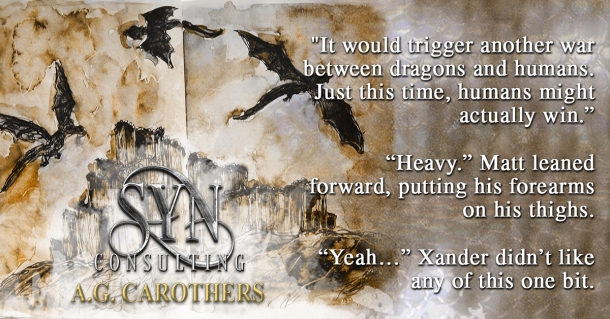