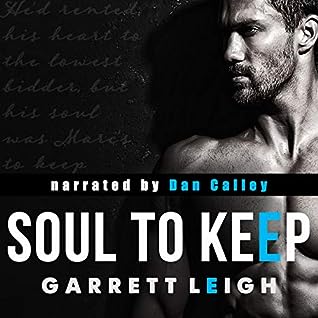 
Recovering addict Jamie Yorke has returned to England from California. With no home or family to speak of, he sticks a pin in a map and finds a small town in the Derbyshire Peak District. Matlock Bath is a quiet place—he just needs to get there, keep his head down, and stay clean. Simple, right? Until a chance meeting on the flight home alters the course of his so-called life forever.

In "Rented Heart" we first met Jamie when he was at his worst. Solidly planted in an addiction that he seemed to have no interest in losing. Wrecking havoc not just in his life but in that of his bestmate, Zac and we left him on a plane to California where he was heading to hopefully fight that addiction and turn his life around.

We first met Mark in "Between Ghost" while he still in the army as a medic under the command of Sergent Nathan Thompson. "Between Ghost" was Nathan and Connor's story and while they make a brief appearance here in "Soul to Keep" this story is very much about Jamie and Mark.

Things pick up about a year after the ending of "Rented Heart" and Jamie's made good on his rehab although as any addict will tell you...you don't get better and recovery is an ongoing thing. But every day you don't give in to your addiction is a win and some wins are harder won than others. Jamie and Mark meet for the first time on a plane when Mark is returning home following surgery on his leg and Jamie is returning home to England after having been away for a year. Jamie's a nervous flyer and Mark's a natural caregiver. After the flight both men go their separate ways only to reconnect a short time later through another chance encounter...only this time neither Jamie or Mark's are willing to walk away...Mark offers Jamie a much needed job.

While I really loved reading and listening to "Rented Heart" for me "Soul to Keep" was the book that gripped my heart and left me hugging my teddy bear for all he was worth (yes, it's been a while but I still bring out the bear when the feelz are strong).

Dan Calley was once again the narrator and once again gave a stellar performance for this story. Providing the characters with accents that felt true to their place of origin, enabling me as a listener to easily imagine a story set in England and helping to create images of the characters that were in sync with what I had envisioned when I first read the book.

When I originally reviewed this book I made a couple of statements that still hold true two years later, so I'm going to once again borrow from my original review...


I really loved this story for me it clicked. While the attraction happened fairly quickly and was easily felt between these two men that didn’t mean that the relationship was instantaneous. For as much as they felt their attraction to each other both men were also hesitant to enter into a relationship because of their own personal demons.

I admit I’m totally a sucker for second chance stories, stories about people who life has repeatedly sucker punched but who have just as repeatedly pulled themselves back up only to keep going, keep trying moving towards their goal of becoming the person they want to be…someone better and stronger than who they were…someone they can be proud of…someone who deserves love and happiness as much as anyone else in this world and that’s what Garrett Leigh writes and writes so incredibly well are stories like this. Stories that remind us that the human spirit is strong and indomitable that giving up should never be a part of anyone’s vocabulary and that everyone is worthy of a second chance at both life and love.

The final thing that I said in that review was that Ms Leigh was fast becoming a favorite author of mine...well, that's changed because without a doubt she is one of my favorite authors and I would strongly recommend her books to anyone wanting to read a story that connects with the reader on an emotional level that touches the heart.

An audio book of "Soul to Keep" was graciously provided by the publisher in exchange for an honest review.