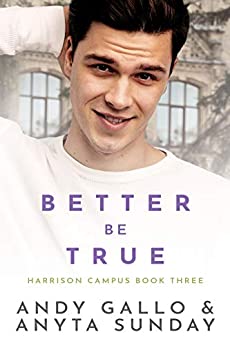 Nico Amato is in trouble.

He’s in love with his roommate. Who’s hung up on his ex. This so isn’t part of his summer plans. Luke’s an all-American jock, a jeans and t-shirt kind of guy. The kind of guy who thinks Nico is too much.

That doesn’t stop Nico from pretending to be Luke’s boyfriend, once, twice, thrice . . . A friend does what a friend does to make an ex jealous.

Just . . . How many favors before Luke gives up on his ex?

Lucas DeRosa has a problem.

His roommate pushes every one of his buttons. Every. Damn. One. This so isn’t part of the script. Nico is flamboyant, a tight jeans/purple blazer kind of guy. The kind of guy who thinks Lucas is boring.

Just . . . How many favors before he wins Nico’s heart?

"Better Be True" is a roommates to lovers, fake-boyfriend, slow burn M/M romance with a HEA. This New Adult, college, opposite attract novel can be read as a standalone. The Harrison Campus series can be read in any order.

Sometimes, right out of the gate, a story just *works* for you on every level, which I'm thrilled to say was the case for me with this 3rd book of the "Harrison Campus" series. : )

Nico and Luke met on the same day that both of their low-life boyfriends dumped them for someone else. For Nico, it was due to the fact that his ex thought he was too "extra", and for Luke, his long-distance beau found him too boring.

Luke's breakup left him with a one-bedroom rental in Philadelphia that he couldn't pay for alone, but a snafu with Nico's sister's wedding also left him playing wedding planner in, you guessed it, Philly and in need of summer housing.

So win-win, right? Except for the fact that the apartment only has one bed! Add in two cases of attraction, and you can guess where this setup was headed, I'm sure.

I adored how Nico and Luke became good friends first, largely due to one or the other of them repeatedly needing a fake boyfriend "plus one" for various events during their time in Philly, keeping their simmering feelings at bay for a good portion of the story.

Another big draw for me was the inclusion of Nico's overly-involved, close, loving, Italian family, who immediately pulled Luke into their midst and made him truly feel like one of their own from their very first meeting. And Nico's "Nonna" (grandmother) was such spitfire of a treat to read.

Other than the guys' sheer inability to get out of their own goddamn way (repeatedly), the main angst in this story surrounded Luke's skeezy, cheating ex-boyfriend, Kent, continually trying to be a shit-stirrer, but thankfully, that asshole did eventually get his comeuppance.

As for steam, once it arrived, it was both flip-floppy and SMOKING HOT, without getting too over-the-too freaky.

If I had to find any fault with this near-perfect story, gun to my head and all of that, I'd say that I would have liked more on-page cameos from Isaiah and Darren, from book 2, because they were awesome MC's as well.

This book was, for sure, my favorite in the series and I'd rate it at around 4.5 stars because it was such a fun, intriguing read and I'd strongly recommend it for fans of touching fake boyfriend stories.

My ARC copy of the book was provided by the authors in exchange for a fair, unbiased review.