Welcome to our re-release spotlight for 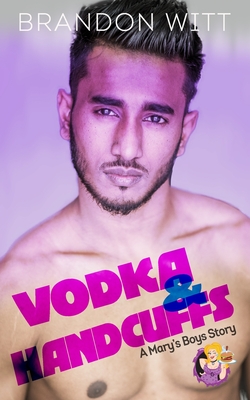 Vahin Arora, Hamburger Mary’s sexy bartender, plays the flirtatious role so well even his closest friends don’t realize he hasn’t had a hookup in months. Then Tall, Dark, and Handsome steps through the door, and Vahin’s passion races back to life.
Being a black cop on the Denver police force is no easy job—Marlon Barton can’t imagine adding being gay to the equation. While Marlon loves his work, his life has taken a turn for the hellish because of his new partner, the nephew of a senator.
Fleeing his partner’s company one night, Marlon stumbles into Mary’s for the first time… and wakes up with a hangover in the bartender’s bed. The one-night stand heats up into a budding romance, but not without stress as Marlon’s partner’s actions threaten Vahin’s livelihood and Marlon’s future on the force. Can Vahin and Marlon face the challenges and hold on to the love and chosen family they’ve found?

This is a re-release of a previously published novella of the same title with a new cover, but without any substantial changes from its previous version.

It took nearly half an hour for the women to get their tables, and by the time they left the bar area, Joseph and Aron were MIA and the raucousness of Mary’s had begun to feel comforting again. The women had ended up being a hoot. He was still going to take a bottle of bourbon, just to be a bitch, but maybe not from the top shelf.
He fell back into his routine—smiling, flirting, and making a show of mixing the drinks. The blond might have gotten stuck in his development after watching Slumdog Millionaire, but for Vahin, it had been Cocktail. His parents would’ve killed him had they known he’d watched it at a friend’s house, both for the R rating and the topic of alcohol, but it had been worth the guilt he later felt. Tom Cruise twirling around bottles and shakers. He’d clung to that fantasy to escape the lonelier moments of his childhood. He’d watched the film later and had to admit it was terrible, but he still loved it.
Vahin noticed the man the second he walked through the front doors. The guy glanced around nervously, as if expecting to be attacked, stepped in farther, then hesitated, staring at the huge plaster statue of Mary holding up a cheeseburger. He looked like he was about to leave when John, who was taking Pat’s spot at the door, greeted him.
The man was gorgeous—tall, deep black skin, short hair, strong jaw, and solid muscle. A thrill shot through Vahin when the man shook his head at John and moved to take one of the seats recently vacated by the bachelorette party.
What had Vahin been thinking before? That those random hookups had gotten boring? He already knew he’d be telling Steven he’d leave the bottle of bourbon if Steven would let him out of cleaning up after closing.
The man still seemed wary as he settled into his spot at the bar, looking around like he’d stepped into another world. He flinched when he noticed the neon yellow-and-green platform high-heeled shoe on the bar. He reached over and picked up the bachelorette party’s receipt from inside and studied it before rolling his eyes and placing it back.
If Vahin managed to scare the guy by not removing the high heels quick enough, he was going to kick himself. Whatever the man’s deal, he was obviously ready to bolt. Maybe a straight guy, not realizing the kind of place he’d entered. Not that nearly half of Mary’s clientele weren’t straight people and families, but it still wasn’t a place a guy on the prowl for women would typically look. Maybe he was on the down low and afraid of running into someone he knew.
Vahin forced himself to get two more drinks for other customers before he waited on the man. He grabbed a drink menu that had worked its way down the bar and slid it toward the guy he was going to get naked with before the night was over. “Hey, welcome to Mile High Hamburger Mary’s. Here’s a drink menu, in case you’re not sure what you’d like.”
The man looked up at Vahin, and his eyes widened slightly. His expression was back in place in less than a heartbeat, but it was enough for Vahin to know he’d liked what he’d seen. So, not a straight guy in a wrong place. Maybe still on the down low, though. Whatever. Vahin could work with that. At least for the night.
“Nah, just beer, please.”
Vahin wasn’t sure if he’d kept his own expression under control or not, but if he hadn’t already wanted to take the man home, the guy’s voice would’ve sealed the deal. Low and warm. So deep, it was almost hard to hear.
“Easy enough. What kind?” There, see that? He managed to speak without panting or drooling.
The man shrugged. “You got Heineken or Guinness?”
“Both.”
“Cool. I’ll do a Heineken.” He held up a hand abruptly. “Actually, know what? Let’s start with one of each. In bottles. Don’t bother with a glass.”
This time Vahin didn’t control his reaction. “Double fisting, huh? Rough day?”
The man let out a snort. “You have no idea.”
“Well, I won’t waste time, then.” He managed not to look over his shoulder as he retrieved the beers. Staring at the guy wouldn’t help get in his pants. Though, if he was starting with two beers, a little staring probably wouldn’t be a deal breaker for too long.
As he popped the caps, Vahin motioned toward Alex with his chin.
The other bartender finished pouring his drink, slid it to the woman at the bar, and came. “What’s up?”
“You mind covering me for a few minutes?”
“Sure, you gotta go out?”
“No. Just might talk with someone for a bit.”
Alex’s gaze darted past Vahin. “Seriously, him? You’re calling dibs on him? I doubted I had a chance, but now I know I don’t have a shot.”
“Dude, quit staring.” Vahin grinned at Alex. “And yeah, sorry, newbie. I’m calling this one.”
Walking back toward the man, Vahin realized he was nervous. He didn’t remember the last time a man made him feel remotely close to that. He slid the bottles across the bar. “I popped the caps but placed them back on. Wasn’t sure which you’d want to drink first.”
“Doesn’t matter.” He grabbed the Guinness and glanced around again.
“First time here?” Like Vahin wouldn’t have noticed a man like this one if he’d come within a block radius of the place.
“That obvious?”


“Maybe a bit.” Vahin hesitated, not sure how far to push. “There’s always a good mix of gays and straights here, if that makes you feel better.”
The man lowered the beer and swallowed before replying. “Oh, no, it’s not that. It’s just different than my normal. I expected a bunch of drag queens or something.”
“No, not tonight.” Maybe he wouldn’t be taking Mr. Adonis home, after all. Down low he could do; too good for fem-gays, he couldn’t. “Though, it’s too bad. We have the best drag queens anywhere.”
The man shrugged.
“Don’t like drag queens?”
He shook his head. “I don’t dislike them. Just not my thing.”
“You ever see a drag show?”
Another head shake.
“Well, you’ll need to come by on a different night. I don’t care what kind of bad day you’ve had. Five minutes with ManDonna and you’ll be laughing your ass off. Trust me.”
The man gave a partial smile. “I for sure could’ve used that tonight. I’ll have to remember to come back and see… ManDonna the next shitty day I have. So probably tomorrow.” He laughed, but it wasn’t a happy sound.
Okay, maybe not a judgmental douche bag—just virgin territory. “Work sucks, huh?” Vahin leaned forward, both to indicate interest and to highlight his shoulders.
“Yeah. It’s my new—” The man halted abruptly. “Actually the last thing I want to think about right now is work.” He took another swig of beer, his longest yet, and leveled his brown eyes on Vahin’s. He lowered the bottle and stuck out his hand. “I’m Marlon.”
Vahin accepted the shake, loving that Marlon’s hand was as massive as his own. “Nice to meet you. I’m Vahin.”
Marlon held his grip a split second too long. That brief moment told Vahin all he needed to know.


Marlon drew his hand back. “Glad I came in here this evening, Vahin.” He took a long swig of beer and finished the first bottle, his gaze never breaking contact and making it perfectly clear Vahin wasn’t the only one who had plans for them that night.