Please welcome Brandon Witt on the re-release day of 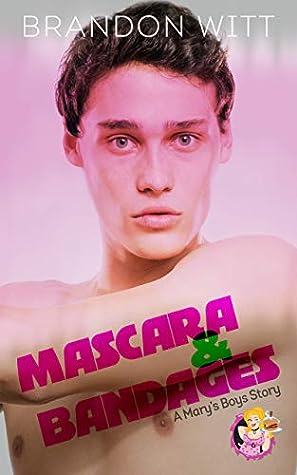 
This is a re-release of a previous published title without any substantial changes other than the cover image.

It might have been the unusually warm early July weather. Or maybe the countless steps and stairs they’d taken. Possibly Teegan had forgotten deodorant, but he didn’t think so. Whatever it was, sweat had become an issue. Sweating right through his baby blue shirt.
Perfect.
First real date with a guy, and he’d worn a light color that showed every drop of sweat. In his defense, he didn’t usually sweat much, maybe during his first few surgeries, but that was it.
Oh, but that was it, wasn’t it? His first.
His first real date. With a guy.
Teegan inspected himself in the mirror, lifting one arm, then the other, both pitted out. He’d chosen the shirt because the color made his skin glow and the cut highlighted his thick arms and chest and narrow waist. Well, his skin was glowing for sure and the shirt clung to him, both in very wrong ways.
Bending over the sink, he splashed cold water on his face. It wasn’t like he could get wetter and maybe it would cool him off, as if it would do any good at this point. He grimaced as he turned off the faucet. Who used brass fixtures anymore? These people obviously had more money than God; they couldn’t afford an update?
With a final glance at his reflection, Teegan gave up and left the bathroom.
Zachary lifted a perfectly plucked eyebrow at him. “You okay?”
Oh crap. He’d been in there long enough to make his date ask if he were okay? “Oh, yeah. Totally. I’m not having stomach issues or anything.”
The eyebrow managed to arch farther.
“I mean….” Teegan let out a breath. “I’m sorry. I’m nervous, and I hadn’t realized how much of a sweaty mess I am. I almost considered getting in their shower.”
Zachary chuckled softly. “I wonder if anyone has ever done that on a home tour. It would be kind of tempting. I mean how often do normal people get to shower in a Capitol Hill mansion?”
“Well, I’d wait for a different mansion. This one still has brass fixtures.” Great. Now, he sounded like an elitist. A sweaty elitist who might have stomach issues.
“You know, I noticed that in the kitchen as well. Kinda surprising.” Zachary lowered his voice and leaned closer. “I think the tour might have been a little desperate for participants this year.”
“Have you done this before?”
He nodded. “Every year, since I was a kid. My mom loved it. After she passed, Dad kept up the tradition.” He shrugged. “It feels good to still do it.”
Teegan hesitated. Zachary had brought him on a date for a family tradition?

“Sorry.” Zachary glanced down at the floor. “I realize how that must sound. I’m not going to spend our date talking about my folks or anything. I just thought it sounded fun and figured all the houses would give us something to talk about it.” Though he still didn’t glance up, a blush grew over his cheeks. “I couldn’t believe I actually asked you on a date. The last thing I was going to do was the stereotypical dinner and movie thing.”
“No. I love it! I’ve never been on a date like this one.” Boy, he could say that again. Teegan reached out and took Zachary’s uninjured hand, then gave it a little squeeze before letting it go. “Thank you. It’s clear you gave a lot of thought to it.”
Zachary glanced back up, still seeming shy, and motioned toward Teegan’s shirt with his chin. “Well, I didn’t think about it being in the nineties today and how much walking we’d be doing.”
Teegan paused as a couple exited a bedroom across the hall, walked past them with barely a glance in the bathroom, and headed down the stairs. “The weather and walking wouldn’t typically bother me; at least it wouldn’t make me look like I’d been swimming. I’m… nervous.” He might as well call a spade a spade.
Zachary’s green eyes narrowed. He opened his mouth to speak, hesitated, then averted his gaze. “Uhm, well, we can skip the last one if you’d like and get an early dinner.”
He was going to have to ask Kelly if he’d been this bad on their first date. He knew he hadn’t been this nervous, but damn. “No. I’m enjoying it. Plus, the brochure makes it sound like the next one is pretty good.”
“Yeah, I was saving it for last. It’s on the tour every year. It’s amazing. But really, I don’t want you to feel—”
He grabbed Zachary’s hand again. “I want to. We can’t end the home tour with brass fixtures. We just can’t.”
And there was that laugh. He’d only heard it a couple of times, but he couldn’t get enough. For those few seconds when he laughed, the pain that always seemed so near Zachary flitted away.