A Royal Kiss And Tell

Every prince has his secrets. And she’s determined to unravel his… 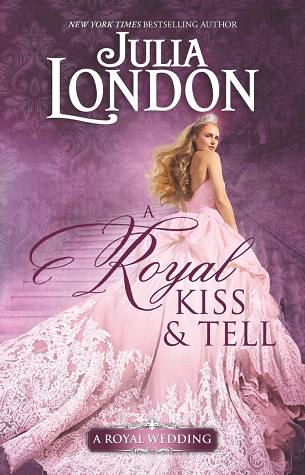 Every young man in London’s ton is vying for Lady Caroline Hawke’s hand—except one. Handsome roué Prince Leopold of Alucia can’t quite remember Caroline’s name, and the insult is not to be tolerated. So Caroline does what any clever, resourceful lady of means would do to make sure Leo never again forgets: sees that scandalous morsels about his reputation are printed in a ladies’ gossip gazette…all while secretly setting her cap for the rakish royal.

Someone has been painting Leo as a blackguard, but who? Socially, it is ruining him. More important, it jeopardizes his investigation into a contemptible scheme that reaches the highest levels of British government. Leo needs Lady Caroline’s help to regain access to society. But this charming prince is about to discover that enlisting the deceptively sweet and sexy Lady Caroline might just cost him his heart, his soul and both their reputations…

Since the day of Eliza’s betrothal to Prince Sebastian, Caroline had also assumed, quite incorrectly, that she would be the principal bridesmaid. After all, she and Eliza and Hollis had been entwined in one another’s lives since they were very little girls.
“I am content with flower girls, honestly,” Eliza said. “I’d be content with a very simple affair. I was content with the civil ceremony. But Queen Daria prefers otherwise.”
“Naturally, she does. This is the wedding where you will be seen by all the people you will rule one day.”
Eliza snorted. “I will not rule, Caroline. I’ll be fortunate if I can find my husband in this massive place.” She’d gestured to the decorative walls around them. It was not an exaggeration—Constantine Palace appeared to be bigger than even Buckingham.
“Let me be the maid of honor,” Caroline had begged her. “I am much better equipped to see to your train than Hollis is.”
“I beg your pardon! I am her sister,” Hollis reminded Caroline.
“The train is thirty feet, Hollis. How will you ever manage? You’ve scarcely managed your own train since we’ve been in Alucia. And my gown should be seen. I spared no expense for it.”
Eliza and Hollis looked at Caroline.
“I mean, of course, after your gown is seen.”
The sisters continued to stare at her. Caroline shrugged a very tiny bit. “Obviously,” she added.
“I rather thought that’s what you meant,” Eliza said charitably. The three of them had gleefully adopted the Alucian style of dress since arriving a month ago in Helenamar. The English style of dress—full skirts, high necks and long sleeves—was hot and heavy. They’d admired the beautiful Alucian gowns that fit the curves of a woman’s body, with the long flowing sleeves, and, most of all, the elaborately embroidered trains…until they discovered that the unusually long trains were a bit of a bother to wear.
“I will manage,” Hollis had insisted. “No one has come to this wedding to see your gown, Caro.”
“Well, obviously, Hollis, they haven’t. But they will be delighted all the same, won’t they? And by the bye, there’s no law that says the attendant of honor must be one’s sister.”
“There is no law, but she is my sister and she will be the attendant of honor,” Eliza said. “And besides, if you were to stand with me, I’d fret the entire ceremony that you were too enthralled with Leo to even notice my train.” She’d arched a golden brow directly at Caroline.
As if Caroline had done something wrong.
She most certainly had not. “Leo? Is that what we’re calling him now?” she drawled. Leo was Prince Sebastian’s younger brother. His Royal Highness Prince Leopold.
Prince Leopold, as everyone knew, had spent the last several years in England, “attending” Cambridge, which meant, in reality, that he spent more time at soirees and gentlemen’s clubs and hunting lodges than studying. Caroline had encountered him last summer in Chichester at a country house party. They’d engaged in a charming little exchange that Caroline recalled perfectly, word for word. Prince Leopold, on the other hand, remembered it not at all. Worse, he didn’t seem to remember her.
The archbishop’s voice suddenly rose into a chant of some sort, drawing Caroline’s attention back to the ceremony. Oh dear, she was thinking about Prince Leopold again when she should be watching her best friend marry a prince. At that moment, Eliza slipped her hand into Prince Sebastian’s hand and held on tightly as the archbishop asked her to repeat after him in English. To love, to honor, to protect and defend.
So romantic.
Caroline glanced to her right. She was seated next to her brother, the baron Beckett Hawke. He was older than her by half a dozen years and had been her guardian since she was eight and he was fourteen. She leaned against him.
“Isn’t she lovely?” she whispered.

Julia London is a NYT, USA Today and Publishers Weekly bestselling author of historical and contemporary romance. She is a six-time finalist for the RITA Award of excellence in romantic fiction, and the recipient of RT Bookclub's Best Historical Novel.