Blogtour: A Dark and Stormy Knight by Kerrigan Byrne

A Dark and Stormy Knight 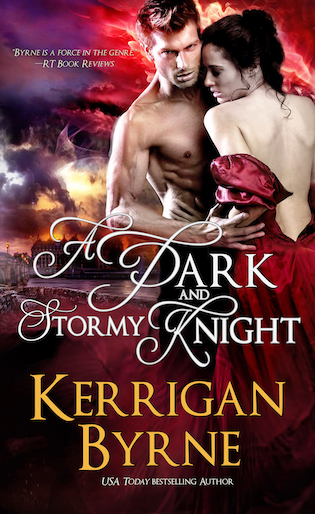 This Knight of the Crown is driven by a painful past and a patient fury… and his entire life is a lie.

Sir Carlton Morley is famously possessed of extraordinary will, singular focus, and a merciless sense of justice. As a man, he secured his fortune and his preeminence as Scotland Yard’s ruthless Chief Inspector. As a decorated soldier, he was legend for his unflinching trigger finger, his precision in battle, and his imperturbable strength. But as a boy, he was someone else. A twin, a thief, and a murderer, until tragedy reshaped him.

Now he stalks the night, in search of redemption and retribution, vowing to never give into temptation, as it’s just another form of weakness.

Until temptation lands—quite literally—in his lap, taking the form of Prudence Goode.

Prim and proper Pru is expected to live a life of drudgery, but before she succumbs to her fate, she craves just one night of desire. On the night she searches for it, she stumbles upon a man made of shadows, muscle and wrath… And decides he is the one.

When their firestorm of passion burns out of control, Morley discovers, too late, that he was right. The tempting woman has become his weakness.
A weakness his enemies can use against him.

Her husband’s gaze swept over her. An arrested expression tightened the casual one he’d been wearing for Bart, his eyes flaring with something intense and ephemeral.
Before she had cause to hope, his features shuttered with the immediacy of a shop locking down for a long absence.
Bart had only just taken his employer’s hat and coat, draping the later damp garment over his arm. He turned and bowed to her low enough to show the round bald spot on his pate. “My lady,” he addressed her diffidently.
“Good afternoon.” She shook herself from her thrall and summoned what she hoped was a convincing smile. “I’d no idea it’d begun to rai—”
He’d already swept through to the corridor to hang his master’s things, apparently feeling no great need to await her reply.
Pru battled with an acute misery that warred for sovereignty with shame. She was such an unwanted stranger here. This didn’t feel like her house.
Nor did it feel like her life.
And the man at the foot of the stairs wore more of a mask now than he ever did as the Knight of Shadows.
He just looked at her with those alert, assessing eyes. She’d begun to feel that even his silence was an investigative technique. A weapon he used against her.
An effective weapon, at that.
Because she felt wounded. Bruised.
But then, everything about him was weaponized. The smooth, composed movements of his powerful limbs, hinting at a controlled brutality. The precisely cut layers of his hair, the perfectly pressed creases of his suit, and the carefully manicured elegance of his hands.
Hands that could manipulate just as much pain as pleasure from a person.
There were men who radiated menace, danger, or violence. But her husband hid all that and reserves of so much more behind the cool, placid lake of his façade.
He was the danger you never saw coming until it was too late.
“You’re…home,” she observed, cringing at the daft bloody obviousness of her statement.
He addressed her with a curt nod, his eyes breaking away from her for the first time, allowing her to breathe. “I was just informing Bart I’ve a meeting best conducted here rather than the office.”
“An Earl, I heard.”
His mouth twisted ruefully. “A courtesy title, but yes.”
“Is there anything I can do to help?” She hoped she didn’t sound as pathetically eager as she felt.
“Not especial—” he looked sharply toward the door and cursed under his breath, his expression turning pained.
Pru hurried down the remainder of the stairs. “What is it?”


“He didn’t come alone.” Agitated, he took three steps away from her and thrust his fingers through his hair, smoothing it back. “I’m in no bloody mood.”
“Did he bring his solicitor?” Pru guessed, wondering if he meant to interrogate the man without one.
“Worse.” A beleaguered breath hissed out of his throat. “He brought his wife.”
Pru brightened at the prospect of female company. She was acquainted with very few Countesses and even if the woman were difficult, she likely couldn’t hold a candle to Prudence’s own mother.
“I’m quite finished,” she declared. “I can entertain the Countess while you conduct your interview.”
A frown pinched his brow. “Finished with what?”
“No,” she laughed. “I’ve attended finishing school with excellent marks. I know how to receive someone of her station.”
“Oh.” Surprisingly, his frown deepened. “Well that will be of little consequence to Farah.”
An instinctive little needle of discomfort pricked her. Farah? Not Lady Northwalk?
The bell chimed and Bart materialized from behind them to answer.
Her husband faced the door with the grim determination a battle general might face an onslaught of marauders. “I suppose it would be cruel not to tell you that Farah used to work as a clerk at Scotland Yard. I’ve known her for nigh on a decade.”
“Why would it be cruel to—?”


“Because Blackwell is certain to mention that I asked her to be my wife.”

Kerrigan Byrne is the USA Today Bestselling and award winning author of several novels in both the romance and mystery genre. Her 2020 releases include A Dark and Stormy Knight in June, All Scot and Bothered in September, and A Treacherous Trade in December.

She lives on the Olympic Peninsula in Washington with her wonderful husband and Willow the Writer Dog. When she’s not writing and researching, you’ll find her on the beach, kayaking, or on land eating, drinking, shopping, and attending live comedy, ballet, or too many movies.