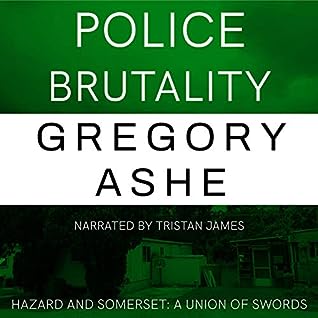 
For the first time in a long while, Emery Hazard’s life is good. His new business as a private detective is taking off. Things are good at home. He loves his boyfriend, John-Henry Somerset; he loves their daughter. He might even love the new friends they’ve found. There’s only one problem: Somers has been talking about marriage.

When a former colleague, Walter Hoffmeister, comes to Hazard and hires him to look into a series of anonymous death threats, Hazard eagerly jumps on the distraction. Hoffmeister might be a jerk, but he’s a paying jerk, and Hazard isn’t convinced the threats are serious.

Until, that is, Hoffmeister is almost gunned down on Hazard’s doorstep. As Hazard investigates more deeply, he learns that more than one person in Wahredua has a reason to wish Hoffmeister dead. His search takes him to the Ozark Volunteers, reincarnated as the Bright Lights movement, but it also leads him into a sanctuary of radical Christianity. Meanwhile, an antifa activist has arrived in town, calling for Hoffmeister’s death and threatening total war with the Bright Lights.

As Hazard continues to look for answers, he becomes a target too—and not just because he’s helping Hoffmeister. The Keeper of Bees is still at large, and the killer hasn’t lost interest in Emery Hazard. Not yet. Not, Hazard begins to suspect, until the Keeper has taken everything Hazard holds dear.

The first time I listened to an audio book written by Gregory Ashe...

was back in December of 2018...so not really that long ago, and I admit I did it for two reasons...#1 some of my friends were reading or listening to his stories and saying some good things and #2 I discovered that Tristan James was the narrator. I've been a fan of his from the first audio book narrated by him that I ever listened to. I've enjoyed around 50 audio books narrated by Tristan James...that is if you only count each title once and not how many times I've listened to a particular audio book...which would mean that I've listened to a whole lot more.

But the subject here is Gregory Ashe's 'Hazard and Somerset: A Union of Swords' series or to be more precise 'A Union of Swords' book #2 'Police Brutality'. Fans of this pairing will know that while this is only the second book in this series this is in fact the eighth novel featuring this couple...give or take a novella and/or story here and there.

The important thing to take away here is that if you want to enjoy the full Hazard and Somerset experience you need to go back to the beginning...back to the original series and yes, it might seem daunting but it's so worth it. I was actually late to the party in discovering what a hidden gem these stories are but once I found out, I was all in. I gathered up the audio books and I marathoned my way through book after book loving every minute of them to the exclusion of all else.


As a rule I'm a big fan of series that present a different set of MCs every book or even two...mostly because in the past I've found that my interest tends to lag as things begin to feel repetitive and so far that has not been the case at all with these stories. Not only has the criminal/investigative aspect of these stories varied in terms of the who, what, where, why and when but the relationship dynamics between Ellery and John-Henry has held a realism to it that's been to say the least kept my need to know 'where things are going for these two men?'

Back in 'Pretty, Pretty Boys' we watched as Emery Hazard returned to his hometown to find himself partnered with John-Henry Somerset the bane of his existence when he was younger and as they go from antagonistic partners to cautious allies to friends and more in each successive story the reader gets to share in the emotional roller coaster ride as well as the dangers they face along the way.

Even after all this time things are not perfect between Ellery and John-Henry and just like couples in the read world their relationship is a work in progress. It's not all sunshine and light with these two...sometimes it's hard and it's just not pretty.  It was at the end of the first series that we saw Emery Hazard leave the police force and with the encouragement of his John-Henry, he set out to become a private investigator.

So now here in their follow up series 'A Union of Swords' we get to see the effect of Emery's decision on their relationship. In book #1 "The Rational Faculty" we saw the beginnings of how things are changing for the former work partnership and it's impact on their personal relationship but here in book #2 "Police Brutality" the changes continue and with John-Henry talking about marriage and the addition of Dulac, Somerset's  recently acquired work partner, who seems to be there at Hazard's every turn and add in Hazard's newest client...Walter Hoffmeister, a rather unpopular police officer that we've encountered in previous stories, along with the fact that 'The Keeper of Bees' is very probably still around and a  threat to all that Ellery holds dear and this series is shaping up to be even more intense and mind gripping than the first one.

As much as I enjoy all aspects of the story, I have to admit for me it's the dynamics between Hazard and Somerset that keep me coming back for more. I love how these two men are together. I love that they see the flaws and imperfections in each other, that they fight...sorry, but in the real world people fight and argue and they make up. They say I'm sorry...not always with words but in ways that only someone who truly loves them can see and understand. Theirs is not a perfect relationship but one that's built on love and determination with a bit of sarcasm and snark thrown in for good measure.

Hazard and Somerset is about second chances, it's about flawed men, broken men who are to stubborn to stay down no matter how hard the world tries to keep them there. It's about men who do the right thing even when it's often not the easy thing to do and it's a series that grabbed my attention and has won my heart. I love this couple and having been there for the beginning I absolutely want to be there for whatever comes next.

An audio book of "Police Brutality" was graciously provided by the author in exchange for an honest review.