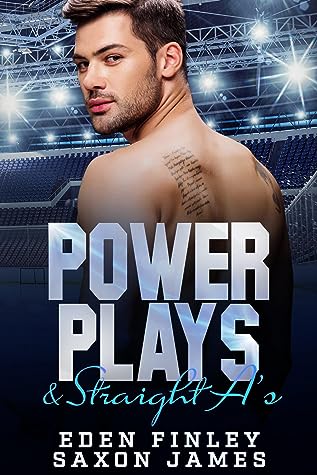 
FOSTER:
“Look out for Zach and don’t hit on him.”
My brother’s request sounds easy enough. Keep an eye out for his best friend on campus and keep my hands to myself.
Easy.
Even if Zach is a quintessential nerd, who I’ve always thought was cute, I don’t have the time to think with my … stick.
There’s only one stick I should be focused on this year, and that’s my hockey stick. My goal once I graduate is to get an NHL contract.
The last thing I need is a distraction. On or off the ice.
Only, keeping to the rules is harder than I thought it would be.

ZACH:
People confuse me.
And no one more than Foster Grant.
I’ve barely spoken two words to him in the whole time I’ve known him, but the second I step foot on campus, he’s impossible to shake.
I can never anticipate his next move. And whenever we’re together, my next move is a total mystery as well.
I want to give in to him, but that might mean coming clean about something I’ve never been bothered about before.
I’m still carrying my V-card.
And I think it’s time to turn it in.

This new collaboration story was a lot of fun, combining both the "jock and awkward nerd" trope with the tried and true "falling for the best friend's (twin) brother".

When Foster met his brother's best friend and roommate three years ago, Seth made Foster promise to keep his distance from Zach, which wasn't a huge problem, even though Foster did think that Zach was cute.

But when Zach transferred to Foster's school, and Seth asked Foster to keep an eye on him, that's when things started getting more complicated.

As expected, because hello, this is a romance, both Foster and Zach found that they enjoyed spending time together, so their initial attractions only got stronger.

But where Seth thought that Zach needed a protector, Foster's time with Zach was more hands-off in that department.

I’m finding it hard to convince myself that he’s doing this for Seth whenever I hear his warm laugh or when he gives me a look that sets butterflies loose in my stomach.

He never asks if I’m okay or if I need anything. He’s just … there. Which is possibly the best thing he could do.

Then once things have the potential to heat up, Zach's main concern was his extremely intact V-card, which he intended to rectify ASAP, as soon as he gained some online knowledge, which was pretty funny.


I cringe and quickly click across to the next video. Nope, too hairy. Room too dirty. The next guy has glasses like mine which are definitely not sexy, Foster took mine off last night for a reason, and in the next … could he really not take the time to wash his feet first?

Then when Foster found out what Zach had been up to, that had me laughing, too.

“Oh, now someone tells me. I swear every time the pizza delivery guy comes over, I think he’s going to have sex with me and then he doesn’t. I wondered if he was broken.”

Several parts of the book from that point forward were pretty steamy, but not to the extreme.

This new book did have both humor and snark; however, I did find myself wishing for a wee bit more, like I was used to in Eden's "Fake Boyfriends" series, which was a master class in banter, IMHO.

And speaking of Eden's previous series, I did get a small Damon fix here, but it was very fleeting, and I missed not getting a cameo by either Ollie or Soren, as they were both NHL hockey players, like Foster was striving to become.

For fans of Eden's earlier work, I'd say the overall feeling here was sort of a Fake Boyfriends "lite", ish, and rate it at around 4 stars.

Bottom line is that if you're a fan of Eden Finley, you're highly likely to enjoy this story, too, but I haven't read any of Saxon James' books yet, so I can't really speak on that front.

My ARC copy of the book was provided by the authors in exchange for a fair, unbiased review