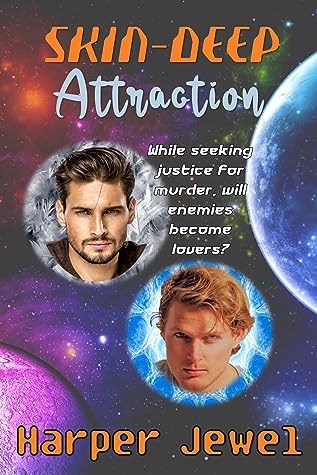 Can a Plumarian reach deep inside himself to find a way to make the first move toward peace with the hostile Jadelings?


Nayix Lexion, Prince of Plumaria, finds himself dragged back to reality by his father and little sister after enduring an unexpected heartbreak and wallowing in isolation.

At the prospect of a possible rescue and saving Plumaria’s failing environment, he reluctantly agrees to journey to Earth. When several snafus get in his way, together with having his conscience tugged in two different directions, will he find the strength needed to survive?

Will a Jadeling find a way to steer through the long-standing hatred for the Plumarians infused in him by his father?

Veldroi Ruvax, son of the Jadeling Elite Leader, gets thrown into his first mission to Earth. Doing his best to overcome his lack of education and training, he’s unprepared for the glitches hurled at him from all sides.
Faced with memory loss and haunting images, he can’t determine whether truth or fiction, will he be able to escape the foreboding dread he might at any moment become something evil? Or can he believe the words of his beguiling rescuer?

Can a Plumarian and a Jadeling find a way past their differences and see what lies beneath their “skins?” Will they be able to work together to bring a murderer to justice and establish peace between their races while navigating their way through their skin-deep attraction?

When Nix’s silver eyes glowed, and his feathers glimmered, Antos could feel his son’s anger. “There are plenty of other Plumarians who can go to Earth and save our race. Don’t you dare pin our fate on me!”
“Son…” Antos tried to contain his disappointment, but his light blue plumage turned a dark blue, giving away his genuine feelings. “You are the most qualified to find the orchids needed to support the Influx 6000. If not for your mother and her extensive knowledge of Earth’s plant life, along with her degree in Botany, we had no chance of discovering the alternative fuel source of Earth’s bright pink flower.” He glanced at his Kindred Consort’s vidpic on his desk and blew it a kiss.

“Instead of concentrating on the continued production of our life-sustaining necessity, we’ve had to work around our destroyed greenhouses and poisoned soil caused by those damn Jadelings when they first attacked us three cycles ago. You know Zarine’s dirt lacks the proper nutrients to grow the orchids. By targeting the Olivine in the Earth’s soil we had collected, the bastards ruined our ability to grow the precious power source. May their scaled bodies disintegrate into the afterworld. They don’t deserve an Eternal Kingdom.” He pointed toward Zarine’s tiny sister planet Xylos and cursed out loud while shaking his fist.
“I’m aware of the damage those bastards did. And I’ll never forget the day of their first strike. It occurred the day after Xahon and I met in the Joining Room, ruining our chance of a proper MoonJourney. But, I still don’t understand why you’re asking me to travel to Earth. You realize the planet holds only horrid memories for me, don’t you?” Nayix argued.
Antos knew his son referred to the accident resulting in the death of his Kindred Consort. “You’ve traveled to Earth before. You are more familiar with the way humans think and conduct themselves.”
“What if I say no? Will you put on your Monarch’s crown and command me to take this journey?” Nix pointed to Antos’s crown, where it sat on the glass desktop.
“If I have no other choice, yes. I can’t imagine what Xahon would say if he knew how long you’ve allowed yourself to become a hermit and wallow in your heartbreak. I’m sure he didn’t want you to do this.”
“Don’t you fucking challenge my feelings or my love for Xahon!” Nayix’s voice rose with each word he spoke.

Harper Jewel, a loyal LGBTQ+ ally and proud Mama Bear to her college-age daughter, lives in northeast New Jersey with her husband. She has four cats, enjoys reading, and taking trips to Walt Disney World.

With her outgoing personality and vivid imagination, she can create believable and memorable plots and characters.

Although she began writing male/female romance/erotica, she has found her niche in Gay Romance. She enjoys every one of her male characters when they speak to her with loud voices while proving love is love. She is proud to have the honor of being the first M/M author accepted at the now-closed Lush Publishing.

Harper is offering a $5.00 Amazon gift card to one randomly selected commenter on this post. Please be sure to leave a contact method when you comment.
Giveaway is restricted to US residents only.