Thank you to Sandra and My Fiction Nook for having me on today to share about the re-release of The Player’s Protégé, the second story in the Campus Connections series. It features Jerry, the cynical best friend of Eric from The Kinsey Scale, and Arlo, a sweet, inexperienced guy for whom Jerry becomes a mentor. 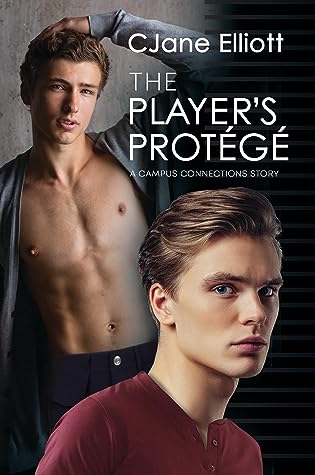 When his college friends bet cynical Jerry that he can’t turn innocent Arlo into a player, Jerry steps up to the challenge. But what happens when Arlo decides all he wants is the unattainable Jerry and Jerry starts to want Arlo in return?

Jerry survived a gay childhood in Texas by being fierce and fabulous. At college he’s known as a player and keeps his heart so guarded he’s forgotten he has one. He’s confident he can prove his friends wrong and teach Arlo to be a stud like him. But despite his armor, Jerry finds humble Arlo so sweet and enticing he soon runs the risk of losing the bet—and his heart.

Arlo kicks butt as a Tae Kwon Do black belt, but he’s been dumped by his only boyfriend and needs help getting himself out there. Enter Jerry, player extraordinaire and happy to provide him with some hands-on coaching. Jerry encourages him to ask for what he wants in life, something Arlo struggles with. The struggle deepens when Arlo discovers that what he truly desires is Jerry.


This is a re-release of a previously published novella without any substantial changes. The cover art has been updated.

“What?” His older sister never bothered with niceties. Jerry found it soothing.


“Hold on.” Denise called out to someone, “Brandon, no calls until I say so. Thanks.” She came back on the line. “How are you fucked? In a good way or a bad way? Although I’m assuming it’s bad if you’re calling me.”


“I actually have recently been fucked in such a good way that now I’m royally fucked in the worst possible way. You need to stop me before I do something very stupid.”


“Why? So you got yourself a hot lover? I fail to see the problem, Jerome. And get to the point. If you were a client, I’d be charging you big bucks for my time.”


Along with being the only one Jerry trusted to help him get his head out of his ass, Denise was also the only one who got to call him by his given name.


“I will do my best to summarize. The problem’s name is Arlo Barnes. He’s a farm boy and a black belt in Tae Kwon Do. I’ve been hired by Tyrone to be Arlo’s sexual consultant, because he wants to get out there after being dumped by his one and only boyfriend.”


“So? Piece of cake. Why wasn’t this a fifteen minute consultation? And what does fucking have to do with it, unless you crossed about fifty million boundaries and fucked your client?”


“Er, well…. Actually, he fucked me. Twice.” Jerry could hear Denise’s umbrage in the silence and hastened to explain. “See, one of his problems is he’s never topped because his boyfriend wouldn’t bottom, and he felt awkward about it. So I volunteered to give him some, uh, hands-on coaching.”


“That was stupid and blurred the lines. It would have been totally unethical if you were, like, his therapist or a professional life coach or something. But I’m taking it he’s not paying you for your expertise?”


“Well then, if it was agreed on between you, and he got the experience he was looking for, what’s the problem?”

Jerry squirmed and stared at a bolt of fabric. “I’m being ridiculous, is the problem. You’re right that showing Arlo how to get out there really required nothing more than a fifteen-minute consultation and setting him up on Grindr. Instead I’ve spent several days with the guy, counseling him, taking him shopping, and now this. I let him top me, not once but two times, and I’m… like, I can’t believe this guy is for real. Denise, it was so good. Right up there with the best sex Eric and I ever had.”


“You see what?” Jerry noticed he was clutching the fabric. He released it slowly and checked the time.


“Your bringing Eric into this is quite interesting.”


“You need to step back and look at yourself, Jerome. Normally, this whole thing wouldn’t faze you. You’d take the opportunity to be the greedy bottom you are and run with it, then set up this farm boy on Grindr and go your merry way. That you equated the sex with you and Eric tells me there’s something about this guy that’s got you hooked. Eric was the only one who ever managed to snag your heart, and you couldn’t handle that. What says you can handle this Arlo doing something similar?”


Jerry stiffened as anger raised the hair on his arms. “Wait a minute. Slow down. I’m not about to lose my heart. That’s ridiculous. I shouldn’t have done that with Arlo, because it was, as you said, unprofessional and crossing boundaries. That’s all.”

This is the 2nd book in the author's Campus Connections series, and while continuing the time line from book 1, this novella is perfectly readable as a standalone. (though why you'd skip the first one, I dunno)Anyway, this book is all about Jerry Helstrom, whom we met in the first book as Eric's best friend/ex-boyfriend/fake boyfriend), and who came across as a bit cynical to me. Not someone who believed in love for himself, being a total player (and totes upfront about it with everyone he takes to bed) but someone who seemed happy to see his best friend oh so in love.Challenged by Will and Eric to take sweet, shy, fresh from the farm Arlo Barnes under his wing and teach him all the fun stuff about being gay and young and full of come, Jerry reluctantly takes on that bet, even if he's sure it's a piece of cake. For a player like Jerry it should be easy-peasy to turn Arlo into a younger copy of himself. Right?Wrong.Jerry quickly realizes that Arlo, sweet, shy, inexperienced, only-had-one-boyfriend Arlo, is exactly what Jerry never knew he always wanted, but he keeps telling himself that Arlo isn't for him, and besides, Jerry is surely not worthy of such a nice guy as Arlo.Much like the first book, the author tells a full-length story in a novella-sized package, with feels and heartache and a little drama and love and holy hot boysecks, Batman. We see Jerry go from total player to totally head over heels, and Arlo go from sweet and shy and kind to sweet and kind and confident, knowing exactly what he wants and how to ask for it. The author does a fabulous job exploring and growing these characters in under 100 pages, while delivering a complete storyline.I enjoyed reading this book, and I think you will too. It's a feel-good, fairly tropey story perfectly suited to wile away a few hours on the beach, tall glass of ice-cold drink in hand.Give it a try, why don't you.** I received a free copy of this book from its publisher in exchange for an honest review. **

After years of hearing characters chatting away in her head, award-winning author CJane Elliott finally decided to put them on paper and hasn’t looked back since. A psychotherapist by training, CJane writes sexy, passionate LGBTQ romances that explore the human psyche. CJane has traveled all over North America for work and her characters are travelers, too, traveling down into their own depths to find what they need to get to the happy ending.


CJane is bisexual and an ardent supporter of LGBTQ equality. In her spare time, CJane can be found dancing, listening to music, or watching old movies. Her family supports her writing habit by staying out of the way when they see her hunched over, staring intensely at her laptop.

CJane is the author of the award-winning Serpentine Series, New Adult contemporary novels set at the University of Virginia. Serpentine Walls was a 2014 Rainbow Awards finalist, Aidan’s Journey was a 2015 EPIC Awards finalist, and Sex, Love, and Videogames won first place in the New Adult category in the 2016 Swirl Awards and first place in Contemporary Fiction in the 2017 EPIC eBook Awards. Her contemporary novel All The Way To Shore was runner up for best bisexual fiction in the 2017 Rainbow Awards.