Today we celebrate the re-release of 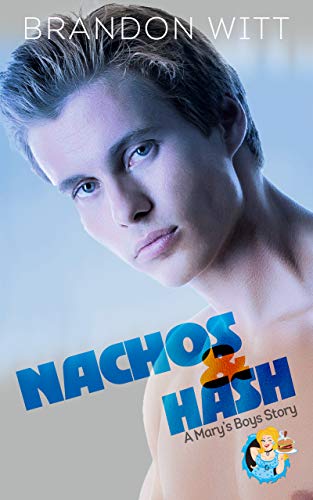 Cody has just accomplished his life’s goal—get the hell out of Kansas. In one fell swoop, he lands a job at Hamburger Mary’s and gets a newfound family. All that’s missing is someone special. But when Darwin shows his interest, Cody is sure it’s too good to be true. After all, what can Darwin possibly see in the high school dropout serving him nachos?

As Darwin falls in love, Cody struggles to realize his worth. When his past threatens the fragile life he is building, Cody spirals into a moment of dark desperation. But Darwin is determined to show Cody that love and family and home are there for him… if Cody can accept what is offered.


This is a re-release of a previously published novella with a brand-new cover.

In his dreams, he was safe and he was allowed to be whoever he was. But even in those fantasies, the place was dark. Billions of lights or not, he’d pictured the city to be dark and gritty. And whatever gay place he’d find was sure to be worse. He wouldn’t have believed a place like Mary’s existed in the world, and if it did, surely it would crumble the instant he found it.
A little over five months, and it still hadn’t fallen apart.
Give it time.
Cody rounded the corner and saw Darwin at the bar, still talking to Vahin. He studied them. They’d be a good couple. Both so handsome. One dark, one light. Darwin might have been from a small hick town as well, but nothing about him seemed like it. He was Vahin’s equal. Not for Cody.
At that moment, Darwin glanced over for probably the millionth time and smiled. There was something unsure about the smile, like he was afraid he was bugging Cody. Yeah, as if that were possible. Maybe Pat and Steven really were right. Maybe he was interested and not just being nice.
Probably didn’t want more than a quick fuck, like most of the men. And, honestly, whatever. That would work. Guys like Darwin had been in Cody’s fantasies, but he’d never actually thought someone like that would look at him. A quick fuck was more than he’d dared to hope for in real life. And maybe Darwin would actually take him to bed instead of an alley or the backseat of a car.
With a trembling breath, he walked over to the bar. It wasn’t that far away, but it felt like miles. Cody thought of a new option to start a conversation with every step he took, but by the time he reached the wood and curved steel barstool beside Darwin, he had absolutely nothing to say.
Vahin came to the rescue, whether intentional or not. “Hey, Cody. Shift over? Want your normal Cherry Coke?”
Okay, maybe rescue was too strong a word. “Uhm… sure.” He felt his cheeks burn.
“Cherry Coke, huh?”
Cody glanced sideways at Darwin, then focused on the paper coaster Vahin slid his way. “Yeah. I’m not a big drinker.”
“That’s okay. Not a huge one myself.”
He wasn’t sure if there was wariness in Darwin’s tone or not. “I really am twenty-one. I can order a drink if you need me to prove it.”
Darwin chuckled and placed his hand on Cody’s arm. “You don’t have to prove you’re twenty-one, and definitely not by drinking.”
Vahin plopped down the Cherry Coke. “Oh, he’s twenty-one. We wouldn’t let him work here if he wasn’t. There’s been a slew of underages sneaking in bars lately. Believe me, all of us are on guard. It gets a bit complicated in a place like this with a restaurant and families and such, so we’re extra careful.” He leaned on the bar, flashing his brilliant smile at Darwin. “Believe me, there’s….” He glanced Cody’s way. “Oh. I, uh… have to….” He straightened and shook his head. “Ah, fuck it.” He pointed to the other end of the bar. “I’m gonna go over there so you two can flirt in peace.”
“Vahin!” At the sound of the mortification in his voice, Cody felt his blush grow hotter.
Vahin just shrugged, gave a wink, and walked away.
Cody darted another glance at Darwin. “Sorry. I….” He had no idea what to say.
“It’s all right. I would like to flirt with you.”
This time, Cody looked directly at Darwin. “You would?”
“Yeah. That okay?”
Cody nodded. He had to be dreaming. Or this was a joke. Or maybe a pity thing. Maybe Steven or Pat had paid Darwin to be nice to him.
Neither said anything. Darwin drank his clear drink and Cody his Cherry Coke.
“So that got awkward. Sorry, Cody. I guess that was about all the flirting I know how to do.”
Cody motioned to Darwin’s drink. “Looks like your vodka’s about out. Want me to refill it for you?”
“No. It’s only water. If I’d been drinking the whole time I’ve been waiting for you, I’d be trashed, and I for sure didn’t want that. I truly don’t drink much.”
Darwin was the stuff dreams were made of. Cody’d had enough drinking around him to last a lifetime. “You, uhm, really were waiting here? For me?”
To Cody’s surprise, Darwin blushed. He wouldn’t have expected a guy like Darwin blushing, and for sure not over him.
“Yeah, I was.”
“Why?” Cody hadn’t meant to say that out loud.
Darwin laughed again. “Honestly, I don’t know. I just wanted to get to know you better. You’re intriguing.”
“I think you have the wrong person.” No sooner had the words left his lips than Cody wished he could kick himself. Darwin’s expression had shifted from shy and flirty to one of pity.
“The kitchen is getting ready to close.” Pat leaned around Cody, giving a huge smile. “Maybe some nachos or chocolate cake?”


Darwin lifted his hand. “Oh no. The nachos were great, but I’m stuffed.” He looked at Cody with concern. “But I bet you do, though. You’ve been working. Please get something to eat.”
“No. I’m fine.”
Pat nudged his shoulder. “Come on, sweetie, you always have a grilled cheese after work.”
“No. I’m fine. Thank you.” Cody tried to keep the heat out of his glare. He knew she meant well, but announcing he liked grilled cheese? First the Cherry Coke and now grilled cheese? He might as well ask Darwin to sign his yearbook.
“Okay, suit yourself. We’ll be around if you change your mind.”
Silence fell again until Pat was out of earshot. Darwin thankfully didn’t bring up the grilled cheese. “The people here genuinely seem to care about you.”
“Yeah, they’re all pretty great.” It was true, though he was annoyed with them at the moment, a sensation he’d not experienced before. Even Steven was watching them from across the restaurant.
Darwin seemed to have noticed as well. “I kinda feel like we’re on display. I’m not sure what to say now that I’ve finally got you to myself.”
“Wanna get out of here?” Shit. Did he really just say that? He wasn’t supposed to make the first move. He never did that.
“Sure.” Darwin’s smile reassured him. “Charlie’s is close by, kinda. We could go there. Though I’m not sure if an actual bar is what you have in mind.” He checked his watch. “It’s pretty late. There’s probably not a lot of places open. Where were you thinking?”
“How about….” He stopped himself. Was he actually going to say that? He shouldn’t. If it was going to happen, it should come from Darwin. But if they went to a bar, it would only get later. And then all that would be left would be the alley, bathroom stall, or the backseat of whatever Darwin drove. He didn’t want that. He wanted something different. Something special. Even if just for an hour or two. “How about your place?”
“My place?” Darwin’s eyes bulged. “Oh, my place! I, ah, wasn’t actually thinking about—”
“Oh, never mind. Sorry. I didn’t mean to assume you’d want to. With me.” Damn it. He never did anything right. He looked down at the bar, commanding himself not to cry. He really was a baby. A pathetic baby.
Darwin’s hand closed over his forearm again. “Hey, it’s okay. It’s not that I don’t want to. Believe me, I do. I didn’t think you would. We don’t have to do that. We can go somewhere and—”
“I want to!” Dear God, could he sound more desperate?
Darwin’s eyes narrowed, and he spoke slowly. “Okay.” His smile shifted from concerned to growing heat. “You sure you wanna do my place? We can go to yours if you’d be more comfortable.”
Oh, yeah. More comfortable in the low-income apartment he shared with a lesbian couple. “No, your place is good.”
For a moment, it looked like Darwin was going to back out, but then he nodded slowly. “Okay, then. My place. You want to grab your car and follow me? I can always bring you back after if you’d rather.”
“Uhm….” He couldn’t admit that he didn’t have a car. Not after the Cherry Coke and the grilled cheese. Didn’t even have a bike. “I’ll ride with you if you don’t mind. And you won’t need to drive me back. I can take an Uber or something.”
“Nonsense. I’ll bring you back.” Darwin slowly slid his hand up and down Cody’s forearm as he spoke, the warm sensation making it nearly impossible for Cody to focus on what he was saying. “Go grab your stuff. I’ll wait here.”
“I got it. Wallet and keys, that’s all I need.”


Darwin stood, and Cody missed the touch of his hand instantly. He’d never been touched like that. “All right, then. Let’s go.”