From National Bestselling author Melissa Bourbon comes a small town magical story with a heart-stopping hero, a sigh-worthy romance, beautiful writing, and characters that jump off the page. Get ready to be charmed by Storie and Reid, and watch out for the twist! 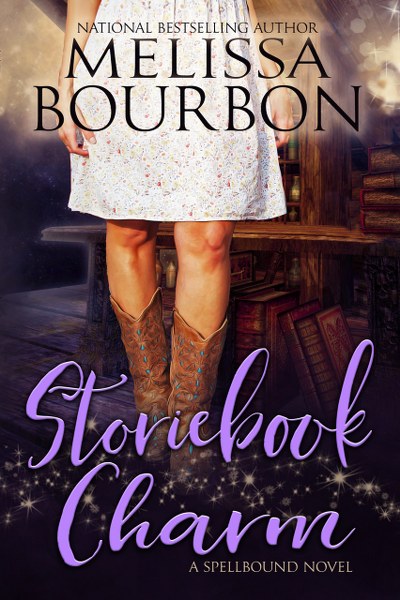 Storie Bell is a witch. Not the kind that lives in Harry Potter's world. No, she is more like Glinda, the good witch of the North, minus the munchkins and Dorothy. But a witch trying to blend in in a small southern town is no easy feat. She’s grown up believing that mortals and witchcraft don't mix.

Storie thinks the biggest threat to her future—opening The Storiebook Cafe, where happy endings begin— is Reid Malone, the very man she ran away from years before. He seems hell bent on getting in the way of her bookstore’s grand opening. But when a mysterious woman from Storie’s past shows up and makes claims that leave Storie confused, she rethinks her entire future.

Eight years ago…
Whiskey Creek, Texas, wasn’t far from Austin, but to Reid Malone, it might as well have been light years away. Thank God for the lake. No matter how much he hungered for city life, this place—especially on a day like today—was his solace.
He parked on the bluff in between the trees near the old haunted fishing cabin, popped open a beer, and readied his fishing pole. Maybe it was college life and worrying only about himself that he missed when he was stuck in his hometown. Back here he had his dad and the bar to worry about. He needed to earn a little cash over the summer, but he was already counting the days till he could get back to the city and put his newly minted diploma to use.
Dark clouds pooled in the distance. A storm was coming in, and it made him breathe easier. There was nothing like the vast Texas sky. In the distance, loud rolling thunder cracked and flashes of lightning streaked through it. Before long, the sky would open, the rain would fall, and the temperature would drop twenty degrees in a matter of minutes. Being here helped put things in perspective for him. The big sky and the power of the storm helped him to not take things so seriously and made the long summer months ahead seem manageable.
The thunder cracked again, and that’s when he saw her.
Storie Bell.
She tore over the dirt road in her daddy’s beat-up old truck, the tires kicking dirt until she skidded to a stop not a hundred yards from him. But she never looked his way. He cast out his line, just watching her. She had to be twenty years old now.  What was she was doing here by herself?
It took her a good while to get out of the cab, but when she did, he nearly dropped his pole. He’d seen Storie around town a few times and he knew she was pretty in an offbeat way, but now? In her cutoff jeans and white T-shirt knotted below her breasts—luscious, beautiful breasts, from what he could see—she was all curves and flesh and bronzed skin. Her hair, like no color he’d ever seen, shimmered in the fading afternoon sunlight. The coppery tint was almost otherworldly, he thought, leaning forward in his lawn chair.
He’d heard tales about her strange behavior and quirky habits, but all he could think was that she was a damn siren. A girl next door who could bring a man to his knees with one crook of her finger.
She released the tailgate and climbed into the back of her daddy’s truck, standing on the edge, raising her arms like she was trying to harness the thunder that was slowly rolling in. At first he thought she was just trying to capture a breeze and stay cool in the humid July heat, but then the clouds moved faster and turned in the sky in time with her rotating hands. He couldn’t tell what she was up to, but a silent alarm sounded in his head. “What the hell?”

Melissa Bourbon, the author of the Magical Dressmaking Mysteries (A Seamless Murder, A Killing Notion, A Custom-Fit Crime, Deadly Patterns), sometimes answers to her Latina-by-marriage name, Misa Ramirez. She gave up teaching middle and high school kids in northern California to write full-time amid horses and Longhorns in north Texas.

She fantasizes about spending summers writing in quaint, cozy locales, has a love-hate relationship with yoga and chocolate, is devoted to her family, and can’t believe she’s lucky enough to be living the life of her dreams.