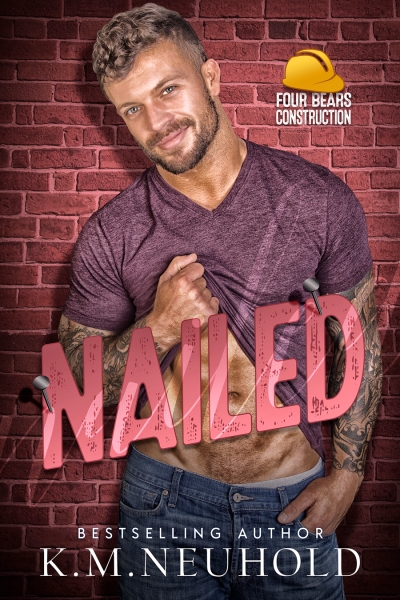 My new neighbor is a total tool

He hated me from the second he laid eyes on me, and I don’t have the first clue why…But, if he wants to hate me, I’m happy to give him a few reasons: mowing the lawn at dawn on the weekend, leaving garbage cans in front of his driveway, renting a petting zoo for my backyard...making a list of ways to drive him crazy is half the fun.

He deserves it with the way he’s driving me crazy right back without even trying— walking around without a shirt on, sweaty rippling muscles on full display, well-worn denim jeans perfectly molded to his...well, you get the idea.

My point is, if he wants a war, I’ll give him one.

***Nailed is an enemies to lovers, neighbors who can't stand each other, omg the anger banging, drool worthy, low angst story, which happens to be the second in my Four Bears Construction Series.

It CAN be read as a stand alone. There are NO shifters in this series, only the OTHER kind of bears.

I feel like I’m living in a never ending loop of torture, brought to me by my neighbor who’s clearly Satan in the flesh. Did I die and go to Hell? Is that what happened? Because, at this point, I’d believe it.

“What the hell?” I mutter as I step out onto my back porch, once again in nothing but my underwear. My half asleep brain is sure for a few seconds that I’m dreaming. There’s no way there are goats and sheep and fucking donkeys wandering around in his backyard right now, right? Rudy barks excitedly and tries to rush past me, but I manage to snag his collar.

“You an ass man?” Stone calls with a grin, and I’m surprised I don’t give myself a stroke for how much effort it takes not to go over there and punch him. “Get it, ass?” he says, pointing to the donkey he’s holding on a leash.

“What the fuck is going on? Why do you have a whole zoo in your backyard?” Rudy whines and tugs as I hold tight to his collar.

“It’s my goddaughter’s eighth birthday, I rented her a petting zoo.”

“You can’t just rent a bunch of farm animals,” I argue.

Stone looks around pointedly at the menagerie. “I’m pretty sure I can.”

“Hey, quit it,” I shout at one of the goats who has wandered over onto my property and is now helping himself to the lavender bush I planted. “Shoo.”

“Edgar, come back over here,” Stone scolds the goat.

“Edgar? You know the names of every one of these animals?” I ask skeptically.


“There’s something seriously wrong with you,” I mutter. “Keep them off my lawn and out of my bushes or your ass will be over here planting all new ones for me,” I warn. A few butterflies flutter past, one of them resting on my lavender bush for a beat before floating away again, but even that isn’t enough to lower my blood pressure.

“Jack will be happy to,” Stone assures me with a serious nod before breaking into another grin. “Get it? Jack ass?” The donkey brays as if he’s in on the joke.

I hate to admit it, but that’s almost funny. But I’ll be damned if I give him the satisfaction of getting a smile from me. Not after he woke me up with some kind of weirdo Old McDonald role play at eight in the morning on a Saturday.

Author K.M.Neuhold is a complete romance junkie, a total sap in every way. She started her journey as an author in new adult, MF romance, but after a chance reading of an MM book she was completely hooked on everything about lovely- and sometimes damaged- men finding their Happily Ever After together.

She has a strong passion for writing characters with a lot of heart and soul, and a bit of humor as well. And she fully admits that her OCD tendencies of making sure every side character has a full backstory will likely always lead to every book having a spin-off or series.

When she's not writing she's a lion tamer, an astronaut, and a superhero...just kidding, she's likely watching Netflix and snuggling with her husky while her amazing husband brings her coffee.


Connect with the author