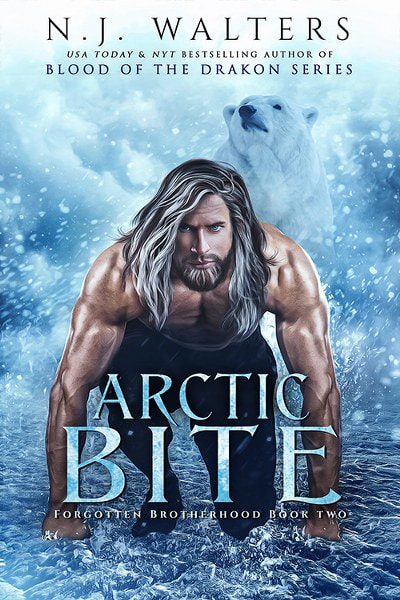 When Alexei Medvedev joined the Forgotten Brotherhood—paranormals hired to assassinate other paranormals—he knew it wouldn’t be a cake walk. But his next target is one of Death’s own Reapers gone rogue. For the first time since he started this gig, “damn hard to kill” feels more like “damn near impossible.”

Tracking Cassie Dobbs brings him to a remote bar in small-town Alaska, where this hot-as-hell Reaper is casually serving drinks, as if she doesn’t have a bounty on her head from Death himself. Alexei is dangerously intrigued. Everyone in the Brotherhood knows the first rule: don’t fall for your target.

But Alexei soon has bigger problems to face than an unexpected attraction. They only send assassins after those who deserve to die…or so he’s been made to believe. Now that he’s met Cassie, though, he’s not so sure.

What if everything he’s been told is a lie, and the person he’s been sent to kill is the only one who knows the truth?

Just her luck. She finally was attracted to a guy and he was probably here to take her home. Or maybe exterminate her. Did he even know what she was? Or was this nothing more than her overactive imagination? Maybe he was socially awkward. No crime in that.

She swallowed back a scream of frustration. She was making herself crazy with all this speculation.

He remained silent, but he did finally raise his head. There was something in his expression she couldn't quite distinguish, and it gave her pause. Was it regret? Pity? Anger bubbled up inside her. Swallowing it back took a real effort, but she managed. With anger would come a burst of energy. That could alert one of her kind to her presence here.

"Just who the hell are you?" she demanded.

He frowned and tilted his head to one side, seeming honestly bewildered by her question. "Alexei Medvedev."

It was tempting to let it go, but she couldn't afford to. She leaned closer until their foreheads were almost touching. "Let me rephrase the question. What are you?" If she was wrong about him, he'd be confused by her question. If she could catch him off guard, she might get an honest reaction.

He released a chuff, the sound more animalistic than human.

It all suddenly made sense--his big size, his enormous appetite, his ability to easily handle whiskey like it was water. The dark, musky scent that clung to his skin. She checked to make sure no one else could hear. For once, the jukebox was quiet and there was only the hum of the television over the bar.

"You're a shifter of some kind, aren't you?" She had no idea just what she was dealing with, but having one of his kind show up in Alaska and come to her place of work was no coincidence.

Without waiting for an answer, she demanded, "Why are you here?"

He straightened--his great size more intimidating than it had been up until this very moment. Without the haze of sexual attraction blinding her, it was easy to see what was glaringly obvious, to put all the clues together.

Ignorance might be bliss, but it could also be her undoing. Too bad she hadn't seduced him last night. That ship had sailed. And that saddened her even as dread made her stomach clench.

He stared right at her, his icy-blue eyes filled with determination. "I'm here for you.'

Maccus Fury, a fallen angel, is trying hard to keep his sanity. Seems being an assassin might be catching up with him. Now, Heaven, or Hell, has sent a beautiful assassin to kill him. Lovely. She’s pretending to seduce him, and he’s okay with that. She’s smart and snarky—but she has no idea what she’s walked into. And he’s more than peeved that they only sent one person. They’re going to need an army if they want him dead.

Morrigan Quill is one of Hell’s bounty hunters. She sold her soul to keep her sister safe, and now she’s working off her contract by catching bad guys and dragging them back to hell. When Lucifer makes her a new offer––that’s definitely too good to be true—she can’t say no. All she has to do is kill a powerful and crazy-hot fallen angel, who will totally kick her ass in battle.

What the hell am I doing?

Her job, for one.

I have no idea why I'm here.


Her lips still tingled where he'd kissed her. It had been more than ten years since she'd had a sexual reaction to a man. Being dragged into Hell to train as a bounty hunter had killed her libido. And since then, the only contact she'd had with the opposite sex was either demon--no thank yo--or human scum like the group she'd encountered tonight. Not exactly designed to make a girl want to rip off her panties and jump into bed.

But Maccus knew what she was and wasn't the least bit intimidated or bothered by it. That was a turn-on.

But she was no closer to understanding exactly who or what he was beyond his name and that fact that he was badass.

Her boss ordered her to sleep with him if necessary. And if sex with a stranger helped keep her alive, she'd been prepared to do it.

Then she'd met him in person and decided it might not be such a hardship after all.

It was smart to go with him, maybe find out where he lived and discover his weaknesses, if he had any. It would make it easier to kill him when the time came. If she tried now, she was as good as dead. There was no time limit on the contract. It made sense to discover all she could about her target before setting the trap.

And she was lying to herself.

Maccus was almost seven feet of muscle and menace. The only thing soft about him was his silky black hair. In person, his features were even more rugged. And his eyes seemed to hold all the secrets of the universe, all the pain.

Black pants clung to his powerful thighs. A black tank top stretched across his massive chest beneath a light leather jacket. They were dressed in an almost identical manner, blending seamlessly with the night.

He woke long forgotten yearnings from back when she'd been nothing more than an unsuspecting human living her ordinary life.

He made her remember who she'd been, not what she'd become.

Primal instincts urged her to run.

Softness was not something she could afford. Not with her life and that of her sister hanging in the balance. Until she'd fulfilled her contract and paid the debt in full, Lucifer was within his rights to grab her sister. And there was nothing she wouldn't do to keep Kayley safe.

That was her objective. She couldn't forget it for one second.

Once upon a time N.J. had the idea that she would like to quit her job at the bookstore, sell everything she owned, leave her hometown, and write romance novels in a place where no one knew her. And she did. Two years later, she went back to the bookstore and her hometown and settled in for another seven years.

One day she gave notice at her job on a Friday morning. On Sunday afternoon, she received a tentative acceptance for her first romance novel and life would never be the same.

N.J. Walters is a New York Times and USA Today Bestselling author who has always been a voracious reader, and now she spends her days writing novels of her own. Vampires, werewolves, dragons, time-travelers, seductive handymen, and next-door neighbors with smoldering good looks--all vie for her attention. It's a tough life, but someone's got to live it.