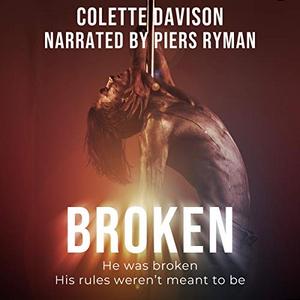 Jag’s rules have kept him safe and free since he escaped conversion therapy, but that was before he walked into Heaven and Hell. A no-strings fling with the club owner, Michael, turns into so much more as Jag finds himself breaking one rule after another.

Michael hasn’t been able to commit to anyone since his partner died, until Jag walks into his club. Falling in lust with the elfin young dancer is easy, and his heart is quick to follow.

Michael gives Jag a reason to stay, but fear rules Jag’s heart more than love. Despite his deepening feelings for Michael, Jag knows he can’t stay. Can he?

Jag's running, he's not planning on stopping but...

He's getting tired and when the sexy owner of the club he's working at shows an interest in him...one that Jag returns, he may not be willing to stop but maybe...just maybe, he could slow down for a while.

Michael's been on his own since loosing Edward the love of his life. Not that he hasn't tried but the right person just doesn't seem to be there for him...not until Jag. Jag may be young but he's had to endure his own heartaches and pain making him a lot wiser than someone of his years should be. Jag's not looking for a relationship but a bit of no strings attached sex with the attractive older club owner would suit him just fine as long as none of the rules get broken because Jag's rules are what keep him safe.

Overall, I liked Jag and Michael together. Given Jag's past he needed someone who had the maturity to be patient and understand that while Jag wasn't totally broken, it's still going to take him some time to get regain a healthy out look about the world and himself. But in spite of what he'd been through Jag was also able to help Michael find a better out look when it came to the loss of Edward. Not only did he help Michael see that it was ok to grieve but that it was ok for him to still love Edward even though he was moving on and had found room in his heart to love Jag too.


In some ways 'Broken' was a bit out of the ordinary in terms of a book with this type of setting. I was expecting some background to be laid with other characters such as some of the dancers and even the punters (Brit speak for 'customers) but for the most part things were confined to Jag, Michael, Michael's best friend Matt and his partner and even their on page inclusion was very limited. While this worked in some ways in others I felt like the characters were a bit flat. I like it when I get to see interaction between not just the MCs but with other secondary characters and I found it strange that there really wasn't any. I mean really Michael's a bar owner and there was never really a conversation between him and any of his employees other than Matt or Jag or any of the customers. The same with Jag we got to see him talking to Michael and Matt that's it. We were told that he talked to other dancers but we never got the conversations. I'm not saying that there needed to be a lot of talk between Michael and/or Jag and other people just that some would have seemed a bit more natural.

And before I forget just one itsy, bitsy note about Jag's parents...these are the poster parents for how not to parent...basic rule of thumb people if your kid's first instinct is to run from you. You're definitely doing things wrong...I'mma just sayin'.

Minor niggle aside I enjoyed listening to the audio book for this story. Piers Ryman was the narrator and while he is a new to me narrator, I do have a couple more books narrated by him on my audio book shelf that I'm looking forward to enjoying soon and one of them might just happen to be the second book in 'The Heaven and Hell Club' so who know's with any luck we'll get to see more Michael and Jag giving their characters a chance to develop more depth. I'd like top see how things progress between these two now that Jag's decided to stop hiding from his parents and stay in one place to make a life for himself.

Maybe not a Canada Day fireworks start for this series but definitely solid enough that I'm curious enough to stick around to see what's coming next and then as with every new series I'll see where things go from there.