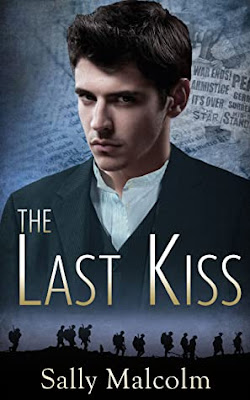 
When Captain Ashleigh Arthur Dalton went to war in 1914, he never expected to fall in love. Yet over three long years at the front, his dashing batman, Private West, became his reason for fighting—and his reason for living.

But Ash’s war ends in catastrophe. Gravely wounded, he’s evacuated home to his family’s country house in Highcliffe. Bereft of West, angry and alone, Ash struggles to re-join the genteel world he no longer understands.

For Harry West, an ostler from London’s East End, it was love at first sight when he met kind and complex Captain Dalton. Harry doubts their friendship can survive in the class-bound world back home, but he knows he’ll never forget his captain.

When the guns finally fall silent, Harry finds himself adrift in London. Unemployed and desperate, he swallows his pride and travels to Highcliffe in search of work and the man he loves. Under the nose of Ash’s overbearing father, the men’s intense wartime friendship deepens into a passionate, forbidden love affair.

But breaching the barriers of class and sexuality is dangerous and enemies lurk in Highcliffe’s rose-scented shadows.

After giving their all for their country, Harry and Ash face a terrible choice—defy family, society and the law to love as their hearts demand, or say goodbye forever.

Utterly brilliant, at once tragic and romantic, The Last Kiss is both a love story and a story of war. It is about the bonds we forge in the battlefield, the forbidden love that blossoms and defies all odds, the memories that haunt us, and the trauma, the overwhelming trauma, of watching your friend drown in mud while you stand by helpless making promises you can't keep.

The way Malcolm writes the battlefield scenes and describes Ash's PTSD is astonishing. She spares no punches.

The entire time I was reading The Last Kiss, I was thinking of the poem Dulce et Decorum Est by Wilfred Owen. The first time I read that poem I was a sophomore in high school, and it has stayed with me for nearly thirty years.

In all my dreams before my helpless sight,He plunges at me, guttering, choking, drowning.

If in some smothering dreams, you too could paceBehind the wagon that we flung him in,And watch the white eyes writhing in his face,His hanging face, like a devil’s sick of sin;If you could hear, at every jolt, the bloodCome gargling from the froth-corrupted lungs,Obscene as cancer, bitter as the cudOf vile, incurable sores on innocent tongues,—My friend, you would not tell with such high zestTo children ardent for some desperate glory,The old Lie: Dulce et decorum est
Pro patria mori.


The last line translates to it is sweet and fitting to die for one's country. What a lie indeed, perpetuated still some 100 years later.

"Why should they imagine glory when the truth is blood and mud and horror?"

"Kinder? Easier you mean. Wrap it all in King and Country and forget what war really is. It betrays them, it betrays everyone who died."

When Ash returns from war, he is a broken man. A below-knee amputee, Ash is trapped by class conventions and his tyrannical father, who finds it distasteful to talk about Ash's injury and "nervous disposition." The only thing that makes sense is Harry West, a fellow soldier, Ash's closest friend, the man who saved his life.

But Harry is a commoner and eventually a stablehand in Ash's household, and Ash is being pushed to marry Olive Allen, the bright, independent daughter of a wealthy family who longs to study medicine. I loved Olive almost as much as I loved Ash and Harry. I'm always so happy when authors include strong female characters in M/M books.

I have focused on the horrors of war in my review, but I must mention that this book is not just about that. The Last Kiss is a beautiful romance about two men so in love, they would do anything to be together.

As much as Ash is a cynic, he is also quietly hopeful. He believes that he and Harry can make it work. It takes longer to convince Harry, who has a sister and nieces depending on him and doesn't want to bring shame on the family.

This book is sensual, tender, and beautifully written. It is slower-paced but gripping because there is always the anticipation of Ash and Harry being found out. The way Harry understands and takes care of Ash, and the way Ash thinks of Harry first always, made my heart ache. Forget petty arguments and relationship woes; these men are just so grateful to have a chance to live and love.

The secondary characters—the villains (Ash's parents who care more about appearances than their son; Olive's father who'd sell her like cattle; John the stable boy, lonely, angry, and defensive) and the heroes (headstrong Olive who understands wanting to be free; Harry's savvy, practical sister Kitty; the stable master who suspects but doesn't judge)—are fully realized, and the HEA, while not ideal by present-day standards, is as close to perfect as it can be for the year 1920.

If you like historical romance, I implore you, read this book! And if you don't, read it anyway.

No words between them, just breaths, no thoughts to trouble them, just touch and taste and feel. Only delight, only joy. Only love.