A letter from the author:
Dear Reader,
The nine-months-pregnant single heroine of Wyoming Special Delivery, Daisy Dawson, is one of six siblings and the only female. But when she goes into labor on the side of a Wyoming road in the dead of summer without a cell phone or a spare brother, she’s beyond grateful when the handsome, mysterious guest at her family’s dude ranch turns up—and delivers her baby boy.
But Harrison McCord has a secret reason for staying at the Dawson Family Ranch. A reason Daisy will not like one bit. Bringing her newborn son into the world, though, changes everything for the both of them.
I hope you enjoy Daisy and Harrison’s story. Feel free to write me with any comments or questions at MelissaSenate@yahoo.com and visit my website, melissasenate.com for more info about me and my books. For lots of photos of my cat and dog, friend me over on Facebook.
Happy spring and happy reading!
Warmest regards,


Melissa Senate
About the book 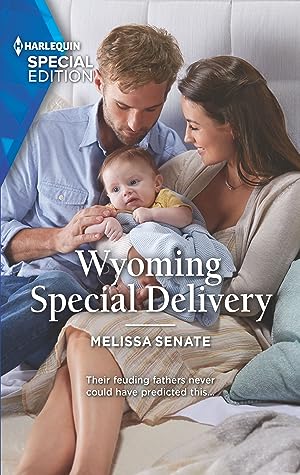 Their feuding fathers nevercould have predicted this…

He came to claim the Dawson Family Ranch…But was Daisy Dawson’s heart part of the deal?

Harrison McCord was sure he was the rightful owner of the Dawson Family Ranch. And delivering Daisy Dawson’s baby on the side of the road was a mere diversion.

Still, when Daisy found out his intentions, instead of pushing him away, she invited him in, figuring he’d start to see her in a whole new light. But what if she started seeing him that way, as well?

Late the next afternoon, Daisy stood in the farmhouse nursery with Noah and Sara and gasped as she looked around. She gently put down Tony’s infant carrier and unbuckled him, carefully cradling him along her arm as she stepped around the room. The nursery sure looked different than it had a day and a half ago. She’d had the basics of the room set up for a couple months now—the crib, the dresser with its changing pad, the glider—all gifts from Noah a few days after she’d told him she was pregnant. But now there were surprises everywhere. In one corner was an adorable plush child’s chair in the shape of a teddy bear for Tony to grow into. And someone had stenciled the wall facing the crib with the moon and stars. Tony’s name was also stenciled on his crib, which was Sara’s handiwork. And there were stacks of gifts in one corner that she knew were baby clothes and blankets and burp cloths. She wouldn’t have to buy anything for Tony for a long time.
“Ford and Rex did the moon and stars,” Noah said. “For novice stencilers who had to read the instructions twice and watch a tutorial, they did a great job.”
“And Zeke and Axel hit up BabyLand and bought that adorable polka-dot rug and the yellow floor lamp,” Sara added. “I didn’t even go with them to make sure they didn’t buy anything weird or clashing, and what they picked out is absolutely perfect.”


The room was so cozy and sweet. “You guys are going to make me cry,” Daisy managed to say around the lump in her throat as she surveyed the nursery. She used her free hand to swipe under her eyes.
She couldn’t say she and her brothers were close—well, except for Noah these days—but they were always there for her. And they’d all been there to meet Tony the day he was born. That was the one lucky thing to come out of her nonwedding—her whole family had already been at the ranch.
This place had always held bad memories for all the siblings, but after inheriting the ranch from their father, they’d all invested in rebuilding and renovating and reopening the Dawson Family Guest Ranch. Noah had done the lion’s share on his own; Daisy had been too pregnant to help much when she’d arrived a few months ago, and the four other Dawsons couldn’t get away from the ranch fast enough.


Ford had once said hell would freeze over be-fore he’d come back here, a sentiment shared by the other three brothers as well, but Ford, Rex, Axel and Zeke had surprised Noah and Daisy at the grand opening this past Memorial Day weekend. And now Axel was staying at the ranch for a bit. That meant three out of six Dawsons at the ranch at the same time. It was a start. And Daisy was going to run with it. 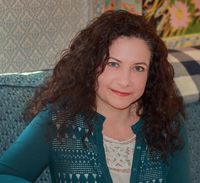 Melissa Senate has written many novels for Harlequin and other publishers, including her debut, SEE JANE DATE, which was made into a TV movie. She also wrote seven books for
Harlequin's Special Edition line under the pen name Meg Maxwell.

Melissa's novels have been published
in over twenty-five countries. She lives on the coast of Maine with her teenaged son, their sweet shepherd mix, Flash, and a comical lap cat named Cleo. Visit her website MelissaSenate.com.