Blogtour: The Secrets Of Love Story Bridge by Phaedra Patrick

The Secrets Of Love Story Bridge 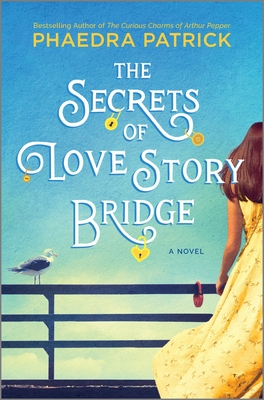 
Single father Mitchell Fisher hates all things romance. He enjoys his job removing padlocks fastened to the famous "love lock" bridges of Upchester city. Only his young daughter, Poppy, knows that behind his disciplined veneer, Mitchell grieves the loss of her mother, Anita.

One fateful day, working on the bridge, Mitchell courageously rescues a woman who falls into the river. He’s surprised to feel a connection to her, but the woman disappears before he learns her name. To Mitchell’s shock, a video of the rescue goes viral, hailing him as "The Hero on the Bridge." He’s soon notified by the mysterious woman’s sister, Liza, that she has been missing for over a year. However, the only clue to where the woman could have gone is the engraved padlock she left on the bridge.

Mitchell finds himself swept up in Liza’s quest to find her lost sister. Along the way, with help from a sparkling cast of characters, Mitchell’s heart gradually unlocks, and he discovers new beginnings can be found in the unlikeliest places...

The lovers who attached their padlocks to the bridges of Upchester might see it as a fun or romantic gesture but, to Mitchell, it was an act of vandalism.
It was the hottest year on record in the city and the morning sun was already beating down on the back of his neck. His biceps flexed as he methodically opened and squeezed his bolt cutters shut, cutting the padlocks off the cast-iron filigree panels of the old Victorian bridge, one by one.
Since local boyband Word Up filmed the video for their international smash hit “Lock Me Up with Your Love” on this bridge, thousands of people were flocking to the small city in the North West of England. They brought and attached locks marked with initials, names, messages, to demonstrate their love for the band and each other, on the city’s five bridges.
Large red and white signs that read no padlocks studded the pavement. But as far as Mitchell could see, the locks still hung on the railings like bees swarming across frames of honeycomb. The constant reminder of love surrounding him, other people’s, made him feel like he was fighting for breath.
As he cut off the locks, he wanted to yell, ‘Why can’t you just keep your feelings to yourselves?’
After several hours of hard work, Mitchell’s trail of broken locks glinted on the pavement like a metal snake. He stopped for a moment and narrowed his eyes as a young couple strolled toward him. The woman glided in a white floaty dress and tan cowboy boots. The man wore shorts and had the physique of an American football player. With his experience of carrying out maintenance across the city’s public areas, Mitchell instinctively knew they were up to something.
After breaking away from his girlfriend, the man walked to the side of the bridge while nonchalantly pulling out a large silver padlock from his pocket.
Mitchell tightened his grip on his cutters. He was once so easy and in love with Anita, but rules were rules. ‘Excuse me,’ he called out. ‘You can’t hang that lock.’
The man frowned and crossed his bulging arms. ‘Oh yeah? And who’s going to stop me?’

Mitchell had the sinewy physique of a sprinter. He was angular all over with dark hair and eyes, and a handsome dorsal hump on his nose. ‘I am,’ he said and put his cutters down on the pavement. He held out his hand for the lock. ‘It’s my job to clear the bridges. You could get a fine.’
Anger flashed across the blond man’s face and he batted Mitchell’s hand away, swiping off his work glove. Mitchell watched as it tumbled down into the river below. Sometimes the water flowed prettily, but today it gushed and gurgled, a bruise-grey hue. A young man had drowned here in a strong current last summer.
The man’s girlfriend wrapped her arms around her boyfriend’s waist and tugged him away. ‘Come on. Leave him alone.’ She cast Mitchell an apologetic smile. ‘Sorry, but we’re so in love. It took us two hours and three buses to get here. We’ll be working miles away from each other soon.  Please let us do this.’
The man looked into her eyes and softened. ‘Yeah, um, sorry, mate,’ he said sheepishly. ‘The heat got the better of me. All we want to do is fasten our lock.’
Mitchell gestured at the sign again. ‘Just think about what you’re doing, guys,’ he said with a weary sigh. ‘Padlocks are just cheap chunks of metal and they’re weighing down the bridges. Can’t you get a nice ring or tattoo instead? Or write letters to each other? There are better ways to say I lov– Well, you know. . .’
The man and the woman shared an incredulous look.
‘Whatever,’ the man glowered, and he shoved his padlock back into the pocket of his shorts. ‘We’ll go to another bridge instead.’
‘I work on those too . . .’
The couple laughed at him and sauntered away.
Mitchell rubbed his nose. He knew his job wasn’t a glamorous one. It wasn’t the one in architecture he’d studied hard and trained for. However, it meant he could pay the rent on his apartment and buy Poppy hot lunch at school each day. Whatever daily hassle he put up with, he needed the work.
His workmate Barry had watched the incident from the other side of the road. Sweat circled under his arms and his forehead shone like a mirror as he crossed over. ‘The padlocks keep multiplying,’ he groaned.
‘We need to keep on going.’
‘But it’s too damn hot.’ Barry undid a button on his polo shirt, showing off unruly chest curls that matched the ones on his head. ‘It’s a violation of our human rights, and no one can tell if we cut off twenty or two hundred.’
Mitchell held his hand up against the glare of the sun. ‘We can tell, and Russ wants the bridges cleared in time for the city centenary celebrations.’
Barry rolled his eyes. ‘There’s only three weeks to go until then. Our boss should come down here and get his hands dirty, too. At least join me for a pint after work.’
Mitchell’s mouth felt parched, and he suddenly longed for an ice-cold beer. A vision of peeling off his polo-shirt and socks and relaxing in a beer garden appeared like a dreamy mirage in his head.
However, he had to pick Poppy up from the after-school club to take her for a guitar lesson, an additional one to her music class in school. Her headteacher, Miss Heathcliff, was a stickler for the school closing promptly at 5.30pm, and it was a rush to get there on time. He lowered his eyes and said, ‘I’d love to, but I have to dash.’
Then he selected his next padlock to attack.

Phaedra Patrick is the author of The Library of Lost and Found, Rise and Shine, Benedict Stone and The Curious Charms of Arthur Pepper, which has been published in over twenty countries around the world. She studied art and marketing, and has worked as a stained-glass artist, film festival organizer and communications manager. An award-winning short story writer, she now writes full-time. She lives in Saddleworth, UK, with her husband and son.