I’m so thrilled to be here today celebrating my latest release, BURN ZONE, which is also my 15 release from Carina Press and is available at all your favorite retailers! This is an older brother’s best friend forbidden romance between two smoke jumpers on the same team. For today’s excerpt I wanted to share one of the turning points early in the story, when things start to shift towards the growing sensual tension between the heroes. I also loved this scene because we’re in Linc’s head, and we get to see all the ways in which Jacob throws him for a loop. Linc’s battle between what his heart wants and what he believes to be the right thing was so gratifying to write—this is a hero who is loyal to his very core and who feels deeply. I hope you enjoy him as much as I do!

Introducing Annabeth Albert’s Hotshots series—the emotions and intensity of Chicago Fire with the raw, natural elements of Man vs. Wild. 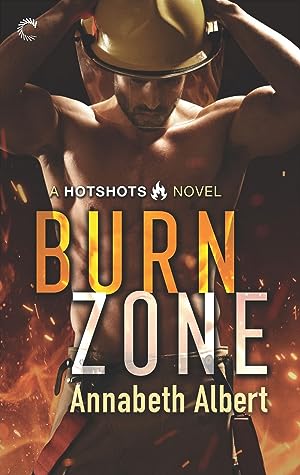 Danger lurks everywhere for Central Oregon’s fire crews, but the biggest risk of all might be losing their hearts…Smoke jumper Lincoln Reid is speechless to see Jacob Hartman among his squad’s new recruits. Linc had promised his late best friend he’d stay away from his little brother. And yet here Jacob is…and almost instantly, the same temptation Linc has always felt around him is causing way too many problems.Jacob gets everyone’s concerns, but he’s waited years for his shot at joining the elite smoke jumping team, hoping to honor his brother’s memory. He’s ready to tackle any challenge Linc throws his way, and senses the chemistry between them—chemistry Linc insists on ignoring—is still alive and kicking. This time, Jacob’s determined to get what he wants.Close quarters and high stakes make it difficult for Linc to keep his resolve, never mind do so while also making sure the rookie’s safe. But the closer they get, the more Linc’s plan to leave at the end of the season risks him breaking another promise: the one his heart wants to make to Jacob.

[…] Linc ended up heading outside to the firepit like he hadn’t known all along where he was headed. Jacob was just working on lighting the thing as the evening temperatures dropped.
“Need a hand?” he asked, squatting down next to him.
“Yours? Always.” Jacob was far too flirty for his family being close by, but Linc liked the warmth in his tone too much to call him on it.
“Here.” Linc handed him some kindling. Same as with the baby, they worked together silently, doing this task like they’d done it a thousand times before, when the reality was that the firepit had always been Wyatt’s domain, not Jacob’s. He liked working alongside Jacob, something that had both annoyed and buoyed him the last week, the way Jacob could often read his mind, anticipate what he was about to ask.
And somehow once the fire was going, they ended up the only two out there in the big wooden chairs, alone but not really. They sat in a companionable silence for a while before Jacob shifted, leaning forward, voice a bare whisper. “You know, I’ve been thinking—”

“Please don’t.” Linc wasn’t trying to be funny. The look on Jacob’s face, at once mischievous and earnest, so damn appealing, both turned him on and put him immediately on edge.
“We need to get this—” Jacob gestured between them “—out of our systems. Once and for all.”
“No.” It didn’t work like that, and it spoke to how damn young Jacob still was that he thought it did.
“Hear me out. One night. Then we can concentrate on work after. Put it behind us. Take away the mystery maybe.”
Linc snorted. It might be simply curiosity for Jacob, but it sure wasn’t for him. “It wouldn’t work.”
“Maybe not, but I at least want to try. You don’t?”
“I’m not an itch you scratch once.”
“That sure of yourself, huh?”
More like he was that sure of Jacob, but he said nothing, just stood. His no might be firm now, but he wasn’t made of iron either. Enough wheedling from Jacob and he might get twisted up enough to agree to that ridiculous plan.
“Night. You have a nice time now with your family. And see you tomorrow. At work.” He chose his words carefully, reminding them both about the two big reasons they couldn’t do anything foolish.
“Just think about it,” Jacob urged.
“It’s cake time!” someone called from the house, saving Linc from answering. But he would. He’d think about it all right. He’d think about it tonight, alone in his bed. And probably tomorrow, in the shower. And he’d want it, just like he had for years now, every cell in his body aware of what he could have but wouldn’t allow himself. Lord, how he’d want it, especially now that Jacob had made this diabolical little offer. One night.
And it didn’t help that a small piece of himself kept whispering, It might work. Never know. It could work. That part was wrong, of course, but it spoke to his want, wormed its way into his thoughts until he wasn’t sure how long his willpower could hold out.