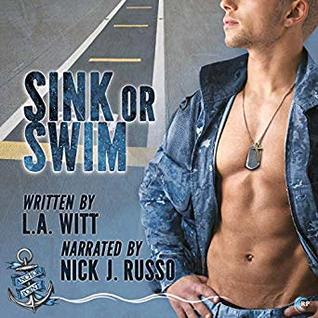 
When need meets fear, can two very different men find common ground? Alhazar Bukhari spent his Navy career in the closet. Now he’s retired, divorced, and hungry for the love he’s never had a chance to experience. He tries to put his faith in Allah to bring the right man into his life, but it’s hard to be patient after all this time. Chaplain Dylan Pedersen spends his days counseling Sailors, and his nights with men he doesn’t know. Months after finally escaping an abusive relationship, he’s terrified of anything more than a physical connection. Maybe it’s a sin, but he’s too lonely to not let men into his bed, and too scared to let them into his heart. When Alhazar’s civilian job brings him aboard the USS Fort Stevens, and his daily prayers bring him into Dylan’s chapel, the chemistry is instantaneous. Sex and friendship quickly evolve into more, but Dylan’s too haunted by his recent past to be the man Alhazar wants. Alhazar needs love, Dylan needs time, and if they can’t find some sort of balance, they’ll sink before they ever have a chance to swim.

'Sink or Swim' is the 8th and possibly final book...

in L.A. Witt's series 'Anchor Point' and it's also the book that I held the most apprehension about reading...now let me just explain this...

When I was growing up my parent's raised us with the belief that there are two topics of conversation that one should always try to avoid... one was politics the other was...you guessed it 'religion'. As I got older I learned that it wasn't necessarily about avoiding these topics so much as entering into them with courtesy and respect for the opinions of others and if that fails...well, then it was simply time to follow Elvis and leave the building. Politics and religion in general are topics on which most people have a very firm mindset and entering into a conversation can be more dangerous than walking through a field of landmines...leaving me to wonder what I was getting myself into with this one since I've had past experiences with books that have had a heavy focus on religion that...well, quite honestly didn't go so well for me.

Dylan is a Protestant Naval Chapel, however the place of worship that he presides over is maintained as a place that welcomes all faiths even that of Islam giving Alhazar a safe place in which to practice the teachings of his faith and this is the point at which I knew that if nothing else I would truly like these two people because for me faith is something that each person should be free to find in their own way and their own time while respecting the rights of others to do the same, so I immediately felt that these men and  I were of like minds on this subject and needless to say I was comfortable with the characters from the word go.


While Dylan and Alhazar's faiths were integral to who they each were and to the story in general it was not the story and was one of a number of issues that the story touched upon...there was an issue of psychological abuse for one of the men in regards to a previous relationship, the story also touched on the subject of harassment (I use this in a general term as this was touched on from more than one aspect), the challenge of being in the military and coming out even after DADT for both men and women. I'm sure there are other things that I'm leaving out here. The list may seem daunting and maybe even a little bit depressing. I felt like it was dealt with in a way that brought attention to the issues without adding an overly somber note to it as well as maintaining a connection to the central theme of things which was the relationship between Dylan and Alhazar.

For as much as I liked Dylan and Alhazar there was a scene in the story that left me feeling very frustrated with and disappointed in Dylan, however, I also understood his feelings at the time...not saying he was right just that I could see where he was coming from. Of course this didn't make me not want to give him a good shake and tell him to get his head out of his pulpit. But the ending more than made up for this and after all was said and done I and more importantly Alhazar happily forgave him.

Once again here in the eighth and maybe final 'Anchor Point' story we're given the consistency of having the same narrator take us from start to finish and while this isn't always the case and sometimes in a series where the main characters change from story to story having different narrators isn't as much of an issue but for me having just marathoned through this series I can honestly say having Nick J. Russo as the narrator for each story was simply and purely an auditory delight that only added to how much I enjoyed the entire series.

As I've indicated this may be the final book I truly don't have any insider knowledge on the yes or no of that but if we're taking votes I have to admit I'd love one more and in the ideal world it would be an anthology of all the couples we've met along the way giving a glimpse into their lives maybe a little further down the road in time to see what's happened and how their lives have changed...so there you have it my wish for what would be the ideal final book to this series but for now I'm on to other things and if you're looking for something to do while waiting for the world to get better...hot men in the military right here...it's worth a peek.

An audio book of 'Sink or Swim' was graciously provided by the publisher in exchange for an honest review.