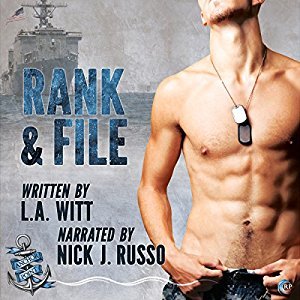 
A standalone novel in the Anchor Point universe

Senior Chief Will Curtis is as straitlaced as they come. While his fellow Sailors have partied their way through their enlistments, he's had his eye on the prize - making master chief and retiring after 30 years of service.

Lieutenant Brent Jameson is a Navy brat turned Annapolis grad. He's lived and breathed the military his whole life, and he knows he's destined for great things - once he's done paying his dues at the bottom of the ladder.

When their paths cross, both men know better than to give in to temptation, but that doesn't stop them. It also doesn't keep them from coming back for more, even though being discovered would sink their careers. Something has to give - Will can retire, Brent can resign, or they'll both face court-martial.

But there's also the option neither wants to acknowledge: jump ship and walk away from each other instead of ending their careers over a fledgling relationship. And they should probably decide before they fall in love.

If it's not the age and it's not the gender...in the military it must be the next obvious thing...it's the 'Rank and File'.

Senior Chief Will Curtis has spent his military career doing what's right and always keeping the big picture in front of him...his goal has always been to make master chief and retire  after 30 years of service. All it takes is one call out to a domestic disturbance and his world gets upended and he begins to question if the prize is worth the price. We first met Will in 'Chief's Mess' where he helped his friend Noah with some tough love and proved what a truly good friend he was.

Lieutenant Brent Jameson's a navy brat, he's lived and breathed the navy for his entire life. He's done Annapolis and now he's paying his military dues to get him off the bottom of the ladder and on to better things...but, when Brent gets tangled up in a domestic dispute that threatens his career plans and meets the very sexy senior chief that he can't seem to get out of his mind. He begins to question whether or not the life plan that he's been following is truly his or just what he's been told he wants.

Brent's an officer. Will's enlisted and never the twain shall meet unless they'd like to be court-martialed. Ya' gotta love the military they may have gotten rid of DADT but they've still got lots of rules and regs to keep their people from pursuing happiness...you know that thing that they keep getting sent off to fight for everyone else to have. Don't get me wrong I get it when the people in question are in a direct chain of command...that only makes sense but there are ways around that too...anyways back to Will and Brent.


Here we have two men one an officer, one enlisted not in each other's chain of command but they can't be together because rules. The other problem is they can't seem to stay away from each other. I liked Will and Brent and the dynamics between them as well as the dilemma they faced.

On a lot of levels this just generally worked for me. I know it's easy to say well that's just dumb but reality is if you're in the military that's also life...rules and regs, they are the military's lifeblood and if you don't know that when you enlist you learn it really fast.

If you like your men hot blooded and sexy this is definitely a series to investigate because so far the one thing that all of these couples have in common besides the fact that one or both of them are in the military is that the sexy times are sexy...like seriously keep your cold shower on standby sexy.

Will and Brent spend a good portion of this story trying to stay away from each other and quite honestly they repeatedly fail to succeed. But what I really enjoyed where the in between moments when we got to see them try quite honestly with more success and more heartfelt effort to be together...there's a weekend spent in Portland that was of course very hot and steamy but it was also incredibly sweet and tender and there may have been some hotwings...seriously hot wings involved in this.

It's not until the ending that we see these two find their way through and while the ending didn't necessarily have the obvious conclusion it was for me the one that suited the story.

In spite of the fact that each of these stories could stand on it's own without benefit of having read/ listened to the previous stories I've really been enjoying the audio books and as well as the fact that the stories are ones that I enjoy a solid part of that is also attributable to the fact that the series has the consistency of the same narrator who happens to be an absolute favorite of mine making this an even more enjoyable experience and a truly delightful way for me to fill my days of self-isolation and social distancing.

Seriously if you can't go out into the world...and we all know we shouldn't, audio books are a great way to fill the time and if you don't like audio books there's always the tried and true method of 'reading' and yes, I've been doing this as well.

So I'm on to the next book in this series and here's hoping that if we all do our part the world will feel better soon.

An audio book of 'Rank and File' was graciously provided by the publisher in exchange for an honest review.