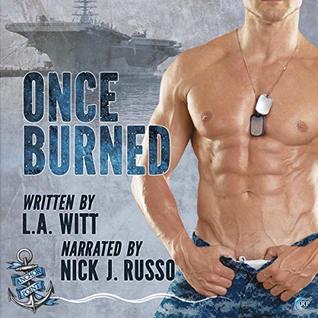 
The Anchor Point stories can be listened to in any order - jump in wherever you'd like!

Captain Mark Thomas’s world has been tossed on its head: A long overdue but still unexpected divorce, a promotion out of left field, last-second orders to a ship where careers go to die. As the dust settles in his new home, he barely recognizes his life, but he sure recognizes the loneliness creeping in.

Diego Ramírez wants nothing to do with the military or its men. Not after the Navy burned him both literally and figuratively, costing him his career, his health, and, ultimately, his green card. Now working illegally in an Anchor Point bar, he keeps the military and its personnel at arm’s length.

But after a single moment of eye contact across the bar, Mark and Diego can’t resist each other. As a one-night stand quickly turns into more, Diego knows he’s playing with fire. Now he can stick around, and let things with Mark inevitably fall apart, or he can run like hell and wonder what might have been. One way or another, Diego knows he’s about to get burned. Again.

This is it...that's right of all the books in this series...

This is the one that gave me that "Daaammmnnnn!!!...I love this story" feeling.

There was just a whole lot here that pushed the right buttons for me. Diego is a character who I'm pretty sure has shown up on the fringes in most of these books as he's one of the regular bartenders at 'The High & Tight' but it really wasn't until 'Going Overboard' book #5 that we saw any real interaction with other characters from him. He was Dalton's best friend and they have a bit of a history and Diego also has a bit of a history with the navy. A history that's left him angry, frustrated and bitter.

Diego's problems are multi-faceted but for the most part things stem back to his time in the navy, his green card and his immigrant status. I think this part of the story for me was a bit easier to get through because one I'm was born in Canada so natural citizen and two born in Canada so no prior knowledge of U.S. immigration laws which allowed me to avoid the mental conflict of what the story contained vs what I maybe knew to be fact.

For me Diego's issues were used as a representation of the issues that immigrants can face more in response to the challenge of trying to achieve citizenship in another country more so than as realistic reflection of those challenges.

For me one of the things that I enjoyed most was seeing Diego work through his feelings about the navy and how it contributed to his situation and come to terms with the events of his past so that he could try to build a future.


Captain Mark Thomass is in a very different place in his life and he's had a very different experience with the navy. Mark's career in the navy is winding down and he's getting ready to face retirement when he suddenly finds himself receiving a divorce, a promotion and a ship to command...one would think it was Christmas. Marks a navy man through and through and if the navy's taught him anything it's how to deal so for him...while the divorce may have been a surprise the promotion and the ship were the solution to the dilemma that it created allowing him to move to Anchor Point and start over.

"Once Burned" was a story of opposites attract and starting over. Diego and Mark are two very different people with very different lives and experiences leading to two very different outlooks on life and the navy. Outlooks that more often than not clashed when it came to...you guessed it...the Navy...oh and baseball...come on you didn't really think they'd cheer for the same team now, did you?

I loved the back and forth between these two men as they each found themselves stepping back to look at situations from the other's perspective and found themselves questioning how they thought and felt about things and coming to the realization that more often than not the solution to a situation didn't come from being right or wrong but from compromise.

For me there was a lot of growth for both of these men and sometimes it seemed like one step forward and two steps back but that's a feeling that I think most of us have felt at one time or another in our lives so it was very relatable.

I think this probably would have been a solid 5 star read if the ending had been filled out just a tiny bit more. Compared to the rest of the story I felt like it held a bit of a rushed feeling to it and I admit it I would have liked a bit more happy together Diego and Mark but all in all I connected really well with this story and with Nick J. Russo on board once again for the narration it was a very solid 4+ story and one that I plan on enjoying again in future.

An audio book of "Once Burned" was graciously provided by the publisher in exchange for an honest review.