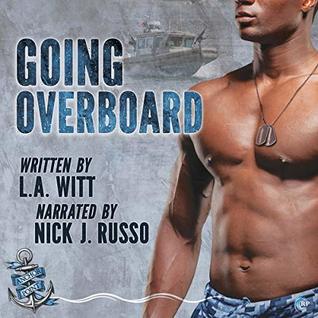 Second-class petty officers Dalton Taylor and Chris Ingram have been best friends since coxswain’s school. Now they’re stationed together in the harbor patrol unit of NAS Adams. They’re content as friends, but secretly, they both ache for more. Neither makes a move, though; while Dalton is out and proud, Chris is closeted—even from his best friend.

Then another coxswain’s negligence nearly drowns Dalton. After a taste of how easily they could lose each other, neither man can keep his feelings hidden anymore, and it turns out love and sex come easy when you’re falling for your best friend.

Things aren’t just heating up between the friends-turned-lovers, though. The Navy is investigating the accident, and the harbor patrol chief isn’t going to let his star coxswain go down for dereliction of duty, even if saving him means throwing Dalton under the bus.

As the threats and gaslighting pile up, Chris and Dalton need each other more than ever—as shipmates, friends, and lovers. But if their chief prevails, the only way they can save their careers is to let each other go.

If I hadn't of already listened to the next book in this series...

I'd probably be saying that this one is my favorite so far but because I'm ahead of the game and have actually taken a break to catch up on the reviews I know that this one was close but it's not 'the one' for me but still a really, really good listen and the first one in the audio series that I did't read the book before listening to the audio.

So once again we have Nick J. Russo as the narrator and can I just say that he did a really superb job on the narration of this story...I would have to say that while it didn't end up being my favorite story so far when it comes to the narration this one tops the list.

'Going Overboard' has it's own bit of uniqueness as far in comparison to the other stories in this series...we haven't met either of the MCs prior to this story and they have no connection to any of the MCs in previous stories, this is also the first biracial couple in the series, compared to the other stories there's not really an age gap or an issue with their rank and both men work in the same section. So all in all a number of small details that help to give this pairing their own unique place in this series.


Dalton and Chris actual met for the first time off page and prior to this story as they became best friends when the attended coxswain's school which is to say driving school...for boats/ships, just a bit of extra info here but boats and ships are not the same thing. In really, really simple basic detail boats are little, ships are BIG! Anything with an overall length of 197 ft. is considered a ship. Ok, that's it for the added info portion of this review.

So back to Dalton and Chris who met at coxswain school and now find themselves stationed at NAS Adams. They're both working hard to gain their rank of MA1 (Master at Arms First Class) time is running out for both of these men as their nearing the end of their qualifying period. But they're studying hard and they're determined. Things are actually looking good until the night that Dalton goes out on patrol and through the negligence of the coxswain in charge that night during incredibly bad weather and rough waters Dalton is thrown overboard, it's only because of the heroic actions of the MA2 on board with him and the coxswain that he's saved...this is where everything goes to hell.

This is also where Dalton and Chris realize that they mean so much more to each other than just friends. This is also where li'l 'ole me starts to feel rage. You see Dalton and Chris have the misfortune of being under the command of the navy's prime example of "if you can't be a good example than you might as well be a horrible warning" Chief. I had rage so much freakin' rage for this man so much rage...I can't even begin to explain mainly because I don't want to spoil the story for anyone who hasn't read/listened to it yet.

The upside of this is that while I really despised this character he achieved two things... one he solidified my connection to the MCs and my desire to see them beat the obstacles and thank to him they had a few but a side benefit of this was that it also created a situation whereby characters from previous stories were required to be involved in the resolution of events and two while I very much enjoy Ms Witt's stories having a character such as this gave an added level of emotional involvement to the story for me. I seriously raged against this man...much to my husband's amusement.

Thankfully at the end of it all I was left satisfied with the outcome of most things with one exception and that was in regards to what happened to the coxswain who was driving the boat the night Dalton was injured but sometimes things just are what they are and for the most part things wrapped up in a fairly realistic manner. So, I'm going to take the win and move on to the next story...which by the way turns out to be my favorite one in this series...although I'm not done listening to the eighth and final book so there may be some wiggle room yet...only time will tell.

An audio book of "Going Overboard" was graciously provided by the publisher in exchange for an honest review.