ARC Review: A Figure of Love by Minerva Spencer 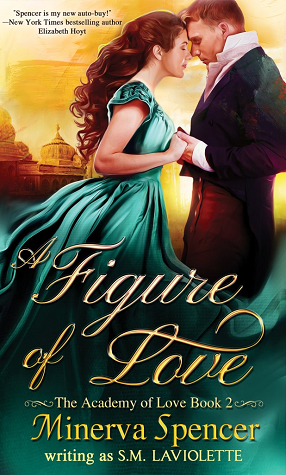 These 7 Regency Era teachers are searching for work but what they get are some serious lessons in love. . . .

Gareth Lockheart is one of the richest men in England, but it will take more than money for the reclusive eccentric to gain entrée into the corridors of power; it will also take a proper country estate and an aristocratic wife with impeccable connections. Gareth is determined to find the right woman the same way he does everything in his life: using logic and mathematics.

Serena Lombard might be the widow of a duke’s son, but she’s always existed on the ton’s fringes. The unconventional French émigré has worked hard to create a secure home for her son and has struggled to establish herself as a respected sculptor and landscape gardener.

Gareth should have known doing business with a woman would be a mistake, especially an unorthodox, opinionated, and far too appealing French widow who manages to destroy his iron-clad ability to concentrate without even trying.

Serena loves the project the wealthy industrialist has hired her to do; it’s too bad the man himself is so remote and unreadable. Not to mention distracting, gorgeous, and utterly captivating.

The only thing the two opposites can agree on is that they should avoid becoming entangled with one another—no matter how difficult that proves to be. But when Serena’s dangerous past catches up with her, it is Gareth she turns to for help and he doesn’t hesitate to give it. But can a man who needs order like other men need air give himself up to the most unpredictable emotion of all: Love?

I'm a big fan of Minerva Spencer, and I was very excited to read A Figure of Love after I loved the first in the series. And Minerva did it again with another interesting, exciting historical romance story.

Though it doesn't explicitly say so, I loved how we got a male MC on the autistic spectrum. Autistic MCs are fairly rare in romance, though I've read a few, and it was exhilarating to find one in this story, even if he was on the very high functioning end of the spectrum. I sincerely hope that this author keeps coming up with interesting, less mainstream characters because I'm absolutely here for it.

Minerva Spencer writes characters with tortured, angsty pasts, and I liked how she balanced the true hardships they've been through without weighing down the story and making it feel overly depressing. She is an expert at that, and I really enjoyed it here.

The plot was a bit confusing and muddled at times, but I didn't want to put it down. It's fairly fast-paced, and you will want to keep reading straight through in one sitting. The great chemistry and pacing makes up for the overly complicated plot.