Review Tour: Without A Trace (Lancaster Falls #2) by RJ Scott

What Lies Beneath - Amazon US | Amazon UK |Universal Link 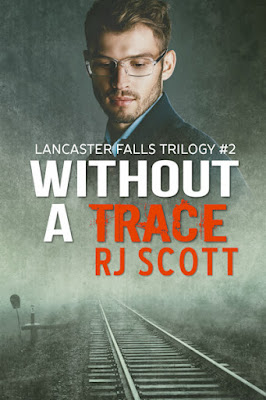 
When long-buried secrets are exposed, and the search for truth becomes a race to save a life, how can two men ever hope to find real love?

Losing his brother has shaped Drew to become the man he is today—heartbroken, alone, but determined to make a difference in the world. Joining the military, fighting battles in places that he’s never even heard of, is his attempt to make amends for telling his brother to go to hell. After his brother disappeared, he’d clung to the hope Casey was out there living his life. Of course, he’d be furious at Drew, and probably hate his brother, but at least in Drew’s head, Casey was safe.

One call changes everything. Casey’s body has been found, and the hope that had fueled Drew’s constant search for the truth is destroyed. Coming home to Lancaster Falls to bury his brother and face his mom’s anguish and accusations, is a nightmare made real, and he has nowhere to run from the pain.

Logan has made a home in Lancaster Falls. As a police officer, he plays by the rules, and he would never think of working off-the-grid. All that changes when an anonymous tip crosses his desk, and he is thrust headlong into solving a hundred-year mystery that could be connected with the modern day death of Casey McGuire. Fighting an attraction to Casey’s brother is hard enough, but the infuriating man is there at Logan’s every turn, interfering with the case, breaking the rules, and demanding that Casey’s story be heard.

If you haven’t read “What Lies Beneath” than you need to stop right here…got get that book and start reading because this is one of those series…you know the type…where each book connects to the next one and chances are very, very good that if you haven’t followed things from the beginning you’re going to get lost and rumor has it that the woods around Lancaster Falls are not a safe place to get lost in.
In the first book we get to meet many of the characters that will continue throughout this series as well as the beginnings of a decade old mystery…What happened to Casey McGuire after he left Lancaster Falls?
For years Casey’s brother Drew (Andrew) chose to believe that Casey was out there somewhere living his life and hopefully being happy or at least he believed that until Casey’s remains were found along with a something more and now ready or not Drew finds himself returning home in search of answers to questions he never wanted to ask…questions like who killed his brother and why?
Logan’s only been in Lancaster Falls for a couple of years. After an injury earned him an early discharge from what was supposed to be a lifetime military career.
Once again the reader is presented with a story that has 2 main story lines the first one being the continuation of the mystery surrounding Casey’s disappearance and the ongoing graffiti that keeps turning up around town and the second one is the relationship that’s developing between Casey and Drew.
There’s a lot of tension as well as antagonism between Drew and Logan, that to say the least makes a relationship seem very unlikely. Drew’s only in town to find out what happened to his brother and help his mom give Casey a proper burial and then he’s out of there or at least that’s how things start for him. While Logan’s determined not to get involved with him because he’s a by the books cop, Drew’s leaving soon and he knows it and he’s the victim’s brother so it just wouldn’t be right, right?
Initially I wasn’t 100% on board with this pairing because I just couldn’t quite see it, but as the antagonism slowly went from antagonism to some rather interesting flirting and both men began to display small gestures that showed their feelings were changing, I began to like this match and for what seems to be some apparent differences these men also share some definite commonalities as well.


Drew and Logan are both ex-military and they’ve both got their own share of issues and alpha male in their basic make-up. But I think I struggled more with Drew’s character than Logan’s because at times he just didn’t really match my impression of what someone who does covert ops and is a sniper would be like…I don’t know maybe he just wasn’t badass enough or at least that’s what I was thinking until I realized that this was only a part of who Drew was. Here in Lancaster Falls he’s just a man, a son, a brother, a friend and he’s someone who’s looking for answers to what happened to one of the most important people in his life…his big brother. Not only that but given that he’s spent the past 10+ years telling himself that Casey’s alive and out there living the life he wanted he’s never come to terms with the reality that his brother’s dead.
In general the pacing for this story was a bit slower than the previous book but I found that especially when it came to the relationship development between Drew and Logan the slower pace just felt more believable.
Now about my favorite part of the to book the ending or to be more precise the last 60 or 70 pages. This is the point at which for me things really started falling into place and I couldn’t put the book down…so yeah I stayed in bed later than usual…sue me, it’s not like I needed to go anywhere #self-isolation, #goodexcuseforreadingmore
While there’s a lot more that I want to say about the ending of this book, I’m trying to keep it spoiler free here, so the best I can comfortably do is to say that for me the ending of this one worked and it worked well. I got some answers and I got more questions but most of all I got left wanting more…so please can it be June now?
*************************


An ARC of ‘Without a Trace’ was graciously provided by the Publisher in exchange for an honest review.