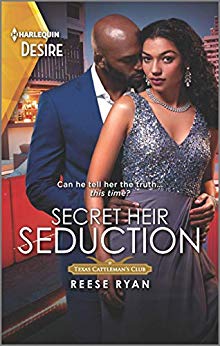 Can he tell her the truth… this time?

Discovering he’s a long-lost heir isn’t the only surprise awaiting Darius Taylor-Pratt in Royal, Texas. He’s next door to his ex after five long years. Darius broke off his red-hot relationship with designer Audra Covington without explanation.

He still has regrets…and truths he’s hiding. Rekindling their flame may cost him…especially when new secrets surface to threaten their second shot at seduction.

Audra slid into the driver’s seat of the Bentley Continental GT convertible her parents had gifted her four years ago, after her business cleared a million dollars in profits in its first year.
She glanced back at the diner. Darius sat motionless in the booth where she’d left him.
Of all the people in the world that she could run into, she had to run into Darius Freaking Taylor-Pratt. The man who’d broken her heart five years ago.
She’d been madly in love with him, and she’d believed he loved her, too. Right up to the moment he’d said things had gotten too serious between them, and he needed space.
There had been no discussion. No evidence he’d fallen for someone else. And no real explanation.
She’d been devastated.
They’d met at a party during grad school at Harvard. The attraction between them had almost been instant. She’d told her friend that she was pretty sure she’d met the man she was going to marry.
Sure, she’d been a little buzzed when she said it. But every day they were together made her believe those words to be true.
Darius suddenly ending things had come of out nowhere. It had left her reeling, wondering what she’d done wrong.
But that was the past. It’d taken some time, but she’d gotten over it and moved on.
Or at least she’d always believed she had. But seeing Darius today made her feel as if things between them weren’t finished at all.
He was more handsome than ever in his navy Tom Ford suit, a white shirt and a navy print tie. His story about being in Royal on business was undoubtedly true. Never a fan of suits, Darius would require a damn good reason to wear one.
And the bald head he was rocking…on him it was sexy as sin. Her fingers had itched with the desire to run her palm over the smooth, brown skin on his clean-shaven head. She’d balled her hands into fists, her fingernails leaving marks on her palms.
Darius’s dark brown eyes registered a mix of emotions she couldn’t quite read.
Sadness. Anger? Maybe even regret.
The only thing she knew for sure was that she’d desperately wanted to lean in and kiss him. If only to remind him of what he’d walked away from five years ago.
Her cell phone rang.
Sophie Blackwood.
Audra smiled, thankful for the distraction. She hit the call button and pulled out of her parking space, heading back toward the house she was renting while she stayed in Royal.
“Hello, Sophie. Back in town yet?”
“We arrived a couple of hours ago. Nigel, my fiancé, needed to stay a couple more days to take care of a staffing issue with the show.”
Audra couldn’t help smiling. Sophie was doing that thing that many newly engaged women did where they referred to their intended as their fiancé, as frequently as possible. It was adorable. And everything about Sophie’s bubbly excitement and the warmth with which she talked about him spoke to just how in love they were.
For Sophie’s sake, Audra truly hoped that their love would last.
“No worries. I’ve been keeping myself occupied. I sketched out a few designs. I’ll show them to you when we get together.”
“Are you busy now? We’re going to grab a bite with friends over at the Glass House in an hour or so. You should join us.”
“Thanks, but I just picked up a salad.” Hopefully, Sophie didn’t think her rude for turning down her offer.
“Is everything all right?” Sophie’s voice was laced with concern.
“Yes. I’m just a bit stunned. I ran into my grad school ex just now.”
“A local?” Sophie asked.
“No, in fact, I got the impression this is his first time here, too. So it was weird to run into him.” Audra bit into the sucker she’d teased Darius with.
She was pretty sure he’d nearly fainted when he caught a glimpse of her pierced tongue.
Good.
She might be over Darius, but she wasn’t above reminding him that he should be sorry he’d walked out on her.
“Oh? Who is he?” Sophie’s voice sounded less jovial.
“Darius Taylor-Pratt. He runs the athletic performance clothing company Thr3d.”
“That must’ve been quite a surprise.” Sophie laughed nervously, then quickly changed the subject. “So the venue where I’d like to have my wedding got damaged during the recent wildfires. The damaged portions have been rebuilt, but there’s still a lot of work to do. If you could spare the time this Saturday, we could definitely use the help. Besides, it would be a chance for you to get to know some of the folks you’re creating custom jewelry pieces for.”
“Sure.” Audra shrugged. “And maybe we can meet tomorrow afternoon to discuss your custom designs?”


“Come to my place tomorrow afternoon at one. We’ll have a late lunch and go over everything.” Full-blown giddiness had returned to Sophie’s voice. “See you then!”
God, I remember what it felt like to be that in love.
Seeing Darius and talking to Sophie made her even more certain she’d done the right thing when she’d broken it off with her most recent ex a few months ago.
Cassius “Cash” Johannsson was exactly the man her mother and United States senator father wanted her to marry. A perfectly nice gentleman from the right family with ambitions to one day sit in the Oval Office. But she wanted more than just “perfectly nice.”
She wanted a man who made her laugh. Who was her friend as well as her lover. A man who understood the manic craziness that often accompanied a creative mind. A man who made her body burn for his.
Cash had never engendered that kind of spark in her. Nor had she ever gushed over Cash the way Sophie did over Nigel. The way she once had over Darius.
In the end, she’d broken it off with Cash because she was just settling. He deserved someone who would feel like the luckiest girl in the world to be on his arm.
Audra entered the beautiful gated community where her rental house was located. She was traveling with sample jewelry pieces and loose diamonds, the value of which easily topped two million dollars. So she required the additional security afforded by this gated community and the safety measures of the home she was renting from the Blackwoods’ family friend—Dixie Musgraves.


She grabbed her meal, courtesy of the Royal Diner, and headed inside, determined to banish all thoughts of Darius.

Reese Ryan writes sexy, contemporary romance featuring a diverse cast of complex characters. She presents her characters with family and career drama, challenging love interests and life-changing secrets while treating readers to emotional love stories with unexpected twists. Past
president of her local RWA chapter and a panelist at the 2017 Los Angeles Times Festival of Books, Reese is an advocate of the romance genre and diversity in fiction. Visit her online at ReeseRyan.com.