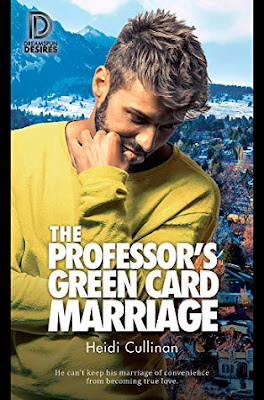 Professor Valentyn Shevchenko isn’t sure how to react when, after months of ineffective flirting, the cute barista’s first words to him are a proposal. In many ways, Peter Grunberg is the solution to all his problems. With his work visa inexplicably denied, Valentyn is running out of options to keep from being deported. But is a green card marriage really the answer? Is it still a marriage of convenience when he’s this attracted to his potential spouse?

Peter came to his uncle’s coffee shop in Boulder, Colorado, to reset his life after his struggles with selective mutism returned with a vengeance. He never meant his first words to the handsome ecology professor to be an offer of marriage, but he’s not backing out now. It doesn’t matter that Peter struggles to find words. He can say everything he needs to with his body.

Though this relationship may have started out back-to-front, Valentyn and Peter are determined to make their fake marriage real. But one misstep in their immigration interview could bring everything crashing down. They’ll have to hope that their love is enough to overcome all their obstacles and give them the prize they’ve both been dreaming of: a certified happy ever after.

This isn't a typical romance. Heidi Cullinan doesn't do typical. Many of her books are political, and this one's no exception. The title says it all.

The Professor's Green Card Marriage is about Valentyn, a Ukrainian man and environmental scientist in his late-30s who's been living in the States since college but is still dealing with visa issues. His latest work visa is denied, and his friend Dennis convinces him that the easiest (and possibly only) way not to be deported is to marry a U.S. citizen.

Peter, who's in his mid-20s, works at his uncle's coffee shop. He seems shy and never says a word to Valentyn. And it's not because he's not interested. Peter has selective mutism (SM) and can't talk to strangers or in unfamiliar settings. Online, he's on fire as he argues climate change with perfect strangers, but face-to-face he freezes up.

SM, a type of anxiety disorder, is a real thing. I have a friend whose daughter has SM, and it's amazing how many people, including teachers, act like she's faking or simply choosing not to speak.

Peter and Valentyn begin communicating via text and email. Valentyn is incredibly supportive of Peter's condition and doesn't push him to talk. Valentyn is not necessarily easy to like. He's broody, neurotic, and pessimistic. He's certain his relationship with Peter is doomed to failure, even as Peter insists that they have a true thing going.


The men's relationship is never platonic and never just a business transaction. They DO have a real relationship, based on shared interests (Peter is a huge environmentalist) and passion. There is one explosive scene in the coffee shop which had me salivating for more.

Valentyn equates relationships with safe, clinical sex, but Peter urges him to give into his dirty desires and take Peter the way he wants to be taken.

Peter is pan, but I also read him as demisexual. He needs to feel a strong connection with someone before he feels comfortable completely letting go. His previous partners told Peter he's bad in bed, but Valentyn vehemently disagrees.

I really liked the secondary characters in this story, particularly Valentyn's friend Dennis who's funny and tenacious, and Peter's wonderful aunt Helen, who knows exactly how to be there for Peter without treating him like a child (unlike's Peter well-meaning but overbearing mother).

The issue of immigration, "illegal" or otherwise, is near and dear to my heart. My family immigrated to the States in the 80s, green cards in hand. I became a U.S. citizen in the mid-90s, after I graduated high school. It wasn't that hard or complicated then, but it was still an expensive, tiresome, and at times overwhelming process.

I am constantly shocked, although I shouldn't be, at how damn difficult the U.S. government makes lives for immigrants. The policies are outrageously racist; the system is appallingly bureaucratic; applications are backlogged for years. I'm not going to get ranty, but suffice it to say, this is just one more reason I loathe the current administration.

I wish this book had been longer. I wanted more scenes with the MCs interacting on page (chunks of time are summarized as the story progresses). The ending feels slightly rushed, but the epilogue is very satisfying.

If you're a fan of Ms. Cullinan's work, I definitely recommend this story.