ARC Review: My Past, Your Future by Gabbi Grey 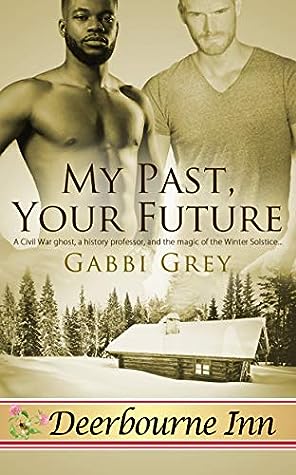 Callum MacLaren, a professor from Scotland, visits Willow Springs, Vermont during the Winter Solstice to study and explore the rich history of St. Joseph's Cemetery. His encounter with a sexy soldier in a tattered Civil War uniform is a captivating puzzle, and the more he learns, the deeper his attraction.

A hundred and fifty years ago, Elijah Freeman was killed during the Second Battle of Fort Wagner and woke up in Willow Springs, the only home he'd known. Alone, he roams the town, unable to leave or interact with a single soul until an intriguing Scot addresses him. Even stranger, the man can see him, hear him, and touch him--a sizzling caress that leaves Elijah aching for more.

But will Elijah return to his ghostly form when the magic of the solstice fades, or is Callum's love enough to keep him in the land of the living?

This was an interesting book. I don't read a lot of ghost stories - I don't usually seek them out, and I can probably count the ones I have read on one hand.

I also had some questions that remained unanswered, such as why is Elijah stuck to the town where he used to live, instead of the battle field where he died, and how is he able to go to some places nearby but not all, and why is Callum the first to ever be able to see and speak to him, because that's just a little too convenient for my liking.

I'm getting ahead of myself though...

Suspend disbelief and don't expect a whole lot of realism, because, hello - this is a ghost story. If you approach this book from that perspective, it's an enjoyable supernatural romance, in which a Scottish historian/professor, visiting a small Vermont town called Willow Springs around the Winter Solstice to do some research on the town's very old graveyard, meets a young freed slave-cum-Union soldier, who's been stuck in ghost form in said town for as long as he's been dead, which is about 150 years.

Both Callum and Elijah are likable characters, and their connection was quickly evident. Having gone without a human touch or any kind of interaction for one-and-a-half centuries, Elijah is flabbergasted when Callum addresses him directly and not only sees and hears him, but is also able to touch him. He invites the older man (or younger man, if you use date of birth) to a cabin in the woods he's been able to enter and which now stands empty since its owner died. Fortuitously, a snow storm traps them in the cabin. And somehow, magically, Elijah stays corporeal through the night and the day of the Winter Solstice.


While parts of the story were obviously unrealistic, the relationship and the romance felt very real to me. Both Elijah and Callum have their own hang-ups and romantic history. Callum is fascinated by the things Elijah has seen since he's been, well, dead, from the end of the Civil War to the industrial revolution, two world wars, automobiles, electricity, etc, at least what of those have touched Willow Springs, as he's tried to keep up with the changing times he "ghosted" through. Elijah on the other hand is just as fascinated by the other man. There are still things that surprise Elijah, and he brings a unique perspective to the story that someone contemporary like Callum wouldn't have considered otherwise, especially in light of both of them being LGBTQ.

The historical aspects of this story sounded accurate to me, and the author appears to have done her homework on those. The writing flows nicely without any major time jumps and is well suited to this story.

I was a little bit concerned as we neared the end of the story as to how the author would resolve the obvious issue between Elijah being a ghost and Callum being alive and give them a happy ending, but fear not, they get their HEA. It is a romance, after all. As to how that happens, well... for that, you have to read this for yourself.

Yes, yes, this was rather enjoyable, and I'm definitely interested in checking out what else this author comes up with.