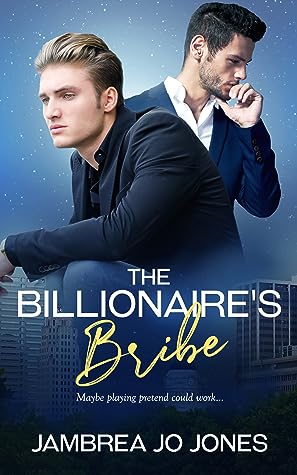 Remington knows not to date employees, but when his father throws down an ultimatum, everything changes. Elros only wants overtime but what he gets instead…

Remington doesn’t want a boyfriend. He’s content with his playboy behavior and extravagant lifestyle, but his father is pushing the issue and wants him to settle down. When an employee comes to him with a request for overtime, he decides to kill two birds with one stone. He can have a pretend boyfriend, which will make his father happy, and Remington will be able to keep his trust fund and the way of life that goes with it. What could go possibly wrong? He’s willing to find out.

Elros needs money—and fast. His boss offers him an opportunity—a bribe, really—to be his fake boyfriend in exchange for a nice-sized payment. Elros isn’t sure living a real-life soap opera is for him, but the money is too good to pass up when his mother has cancer and the bills are adding up faster than he can blink. Maybe playing pretend could work.

This was... okay. I wasn't blown away, but neither was I bored with the book. I had some hang-ups with the story, but those are probably mine, and YMMV.

First off, the title seems to hint at the billionaire bribing his employee to fake being his boyfriend. A bribe is a bit more sinister than what actually happens - the boss/billionaire offering his employee the ability to make some money on the side in exchange for playing the doting boyfriend.

Secondly, there are only so many billionaires in this world, and I couldn't quite fathom how Remi would have made these billions with the work he does or the company he owns.

I'm not going to rehash the blurb here, which tells you everything you need to know about the first couple of chapters of this book. I wasn't quite expecting the fake boyfriend thing to turn into a real boyfriend thing so quickly. I liked both MCs well enough, and I thought that they were well suited to each other. Remi is obviously surprised at himself when he finds that faking it with Elros isn't as fake as he thought it would be, and Elros didn't expect to fall for his boss.


There's some angst here too and some pain, what with Elros' mother dying of cancer, which is portrayed as having the potential to derail the budding romance, and I thought that while Elros' actions were mostly understandable, keeping his mother's illness a secret from Remi for longer than needed wasn't conducive to the relationship. Remi on the other hand, being initially portrayed as someone who's only interested in 'pump and dump', playing the field and enjoying his status in life, falls hard and fast and opens himself up wide to Elros pretty much from the get-go. He's all in, where Elros seems more hesitant.

Remi's father and Elros' mother were both very nice supporting characters, both bringing some wisdom and levity to the pages of this book.

Overall, this was an okay book for me. While the emotions are written on the page, I didn't really feel them, and often this felt more tell than show. I wasn't fully engaged with the characters and that prevented me from really rooting for them. Again, YMMV.