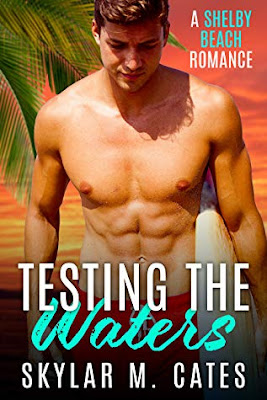 
What if the right person could change everything?

Random hookups, saying “yes” to whatever, Zane thinks adulting should be easy. His childhood was a hard enough mess. After a health scare, however, Zane reevaluates his life and starts anew. When Zane meets Jordan, everything he secretly desires is finally in front of him. But Jordan Shelby’s family practically owns the town of Shelby Beach. Why would Jordan take a guy like Zane seriously?

Jordan only wants swimming lessons, so hiring Zane might have been a huge mistake. Even if Jordan resists Zane for now, the mere sight of the beautiful trainer fills him with yearning. Swimming isn’t Jordan’s only anxiety. Being nonbinary, Jordan’s dating life—hell, his life in general—isn’t always clear. Can he really trust Zane with his body? His heart?

Testing the Waters is a romance with a gender-fluid MC, a hurt/comfort trope, and a guaranteed happy ending.

Testing the Waters reminds me of Skylar Cates' Sunshine and Happiness series, not because the stories are particularly alike, but because the tone of the book is mildly melancholic and the main characters exude real human emotions, like insecurity and fear.

Following a near drowning incident when he was a child, Jordan develops aquaphobia. His beloved grandfather loves to swim, so Jordan decides to overcome his fear and hires hunky trainer Zane to help him.

Zane is chiseled and confident, but he hides insecurities of his own. Zane had a troubled childhood and is a cancer survivor. He runs a successful gym with his cousin Oliver but isn't truly passionate about his job.

Jordan resists Zane's flirting until he realizes that he doesn't want to and that there's more to Zane than meets the eye.

The relationship that develops between the men is tender, sensual, and filled with trust. The story, told in a dual POV, has elements of hurt/comfort and ends with a tentative HEA.

The secondary characters (particularly Oliver and Jordan's best friend Tristan, who is trans) are well sketched and essential to the story, but the focus is definitely on Zane and Jordan's relationship. I appreciated that the nuances of Jordan's non-binary gender identity were explored in such depth.