Release Blitz: Socks for an Otter by Posy Roberts

Socks for an Otter

What is an otter and why is that in a romance title? An otter is a lean and hairy man in the gay tribe. Not as hairy as a bear, not as lean or boyish as a twink, but somewhere in between. In Socks for an Otter, Sebastian is an otter and also the cover model. And socks actually means socks. Sebastian is homeless, and the number one requested donation at homeless shelters is socks.

Louis, the other man in this story, is a widower. His wife died three years ago, and he’s a very sad, lonely man who tries to find meaning in his life by doing things he and his wife used to do like donating to the food pantry. On his way there, he literally runs into Sebastian. It’s a Meet Ugly that looks like it has no hope of redemption, but Sebastian swallows his pride and takes Louis up on his offer of a home-cooked meal that leads to so much more.

This is a story about kindness, respect, and falling in love when you least expect it. 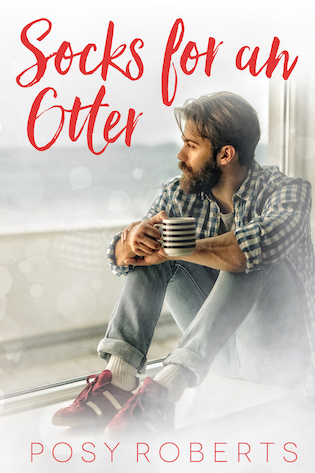 But Sebastian would rather be homeless and hungry than clueless.
On his way to the food pantry, a guy on his cell phone runs into him and triggers his prickly side. As a sign of goodwill, Louis offers to cook for him. But all Sebastian sees is the privilege he used to have.


But it’s been days since he’s had a hot meal. And a blizzard is coming.


Socks for an Otter is a heartwarming riches-to-rags MM romance brewed with hurt/comfort, comedy, a second chance at love, age gap, millionaires, and men from different worlds who will give you all the feels.

As Louis balanced the cooler on a hip and tried to find the End Call button through his tears—caused by the biting wind, of course—he slammed into something.
“Shit. Watch where you’re going, asshole. Am I invisible?”
Or someone.
“I’m sorry. I’m so sorry. I didn’t see you through my—”
Words failed Louis as the angry young man faced him, but his words didn’t fail him because of the rage directed his way. No, it was the man’s serious eyes, his innocent face hidden behind a mask of facial hair that reminded Louis of the first and only guy he’d kissed, the guy who changed how Louis defined his sexuality.
“I’m seriously sorry. I was distracted.” He presented the cooler. “Here. Do you like blue crab? Have some. I have a whole cooler full and it needs to be eaten soon.”
“Are you fucking kidding me?”
“I’m not. Here. It’s worth a lot on the market. At least a couple hundred.”
“You’re fucking with me now, right?” the guy said as he took a step closer.
Louis took a step back.
“I’m not into the illegal seafood trade. Do I look like I am?”

“No.” Louis shook his head. “I’m sorry. I’m flustered. Sorry for running into you. I was on the phone with my—”
The guy held up his hand. “I get it. You’re distracted by your perfect life. You feel bad, so you’re offering me something of value. But you see, your precious blue crab is valueless to me right now. More than anything, I want cheese and soup and something that sticks to my ribs and gets me through this fucking storm. The few bites of meat I’d get from one of your pretty crabs wouldn’t cut it. What else you got in there? Roe? Escargot? Fucking oysters? ’Cause if I find a pearl, then maybe I can eat for more than a day or two.”
“I’ll cook for you,” slipped out before Louis could stop himself. “Come back to my place. Eat as many as you want. I’ve got more at home. You can help me eat them. As many as you want.”
Louis hoped the guy read the tears in his eyes as wind-inspired rather than what they really were: the realization of just how pathetic his life had become.
Louis was so fucking lonely, he’d just begged a stranger to let him cook for him. All so he wouldn’t be alone.
The guy spun on his heel and stalked away, tucking his chin deeper into his coat. With each step, the sole on his right shoe slapped. It was unglued and looked like it wouldn’t make it through the night.
Slap. Slap. Slap. Slap.
Louis was that shoe. 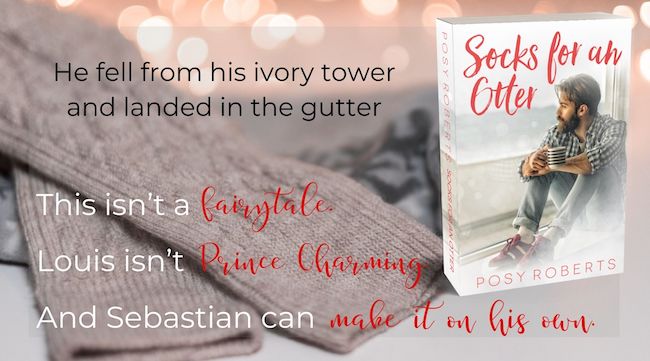 Posy Roberts started reading romance when she was young, sneaking peeks at adult books long before she should’ve. Textbooks eventually replaced the novels, and she somehow existed without reading for fun. When she finally picked up a romance years later, it was like slipping on a soft hoodie . . . that didn’t quite fit right. She wanted something more.

She wanted to read about men falling in love with each other. She wanted to explore beyond the happily ever after and watch characters navigate the unpredictability of life and create a happy home. So Posy sat down at her keyboard to write the books she wanted to read.

Her stories have been USA Today’s “Happily Ever After” Must-Reads and Rainbow Award finalists. When she’s not writing or editing, she’s spending time with loved ones and doing anything possible to get out of grocery shopping and cooking.