Beauty and the Beast, but with more daddy issues and violence. 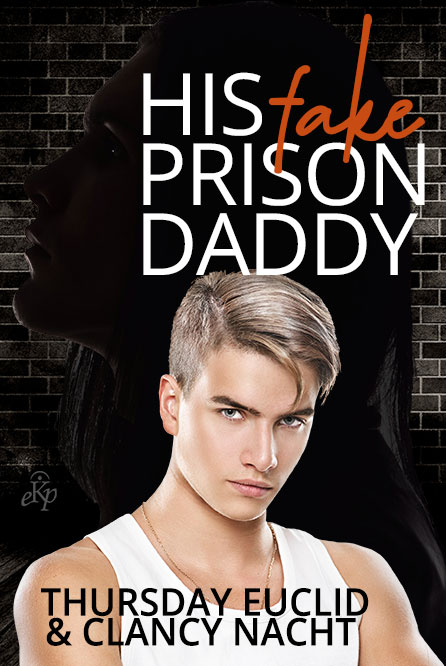 When eighteen-year-old hacker Elias Stuyvesant ends up in a maximum security state prison, he's woefully unprepared despite his time in juvie. On day one, he's thrown in with a man known as the Santa Fe Slayer, Ambrose Hughes.

Hughes is quiet, disfigured, and weirdly urbane. Elias was so young when Hughes committed his crimes that he has only the faintest idea what Hughes is in for. However, Hughes makes clear that Elias is his ideal victim type...and there's no one to protect Elias from the much larger man with his prison-jacked body and that hard gleam in his dark eyes.

Whoever paired them has it in for Elias; that much is obvious.

Elias is terrified of Hughes, but he soon realizes the other prisoners are worse. If Elias is going to survive, he'll have to choose the lesser of the evils: To preserve himself, he'll need Hughes for his Daddy. And given Hughes's skewed morality, they'll have to fake it till they make it.

Then the guard exhaled and stopped outside a heavily reinforced door set in a wall of solid concrete. It looked nothing like the cell blocks they’d passed earlier, with their steel bars or Plexiglas, open to the guards’ gazes and Elias’s curiosity.

“This is…” Elias searched the guard’s face for clues, unable to finish articulating his question.

“Yeah, this is it. You’re in with—” The guard licked his lips with what looked like legit nervousness. “Ambrose Hughes.”

Elias blinked at him, not grasping the gravity invested in that name. Who the hell was that?

The guard looked at Elias with visible pity. “The Santa Fe Slayer.”

The Santa Fe Slayer was fucking crazy. Not that Elias knew precisely what Hughes had done beyond killing people, but if he’d been active in most other states, he’d be on Death Row. But motherfucking New Mexico abolished the death penalty, so Hughes was just waiting to die in prison, no hope of parole.

Which meant, Elias quickly grasped, that he really had nothing motivating him to behave. What was one more murder to him?

He was already serving like twelve consecutive life sentences. Was he one of those who ate people?


Elias didn’t have time to collect his wits or steel his bladder before the guard knocked politely at the door and then unlocked it, pushing it open to reveal a windowless room thick with shadow. It was somehow even smaller than Elias had expected, with nothing to look at but a sink, a toilet, a little shelf built into the wall currently stocked with what looked like battered novels, and a bunk against the far wall, its bottom bed stripped bare, waiting for the bedding Elias carried. It took him a moment to realize the big shadow up by the ceiling was his cellmate.

Hughes stretched languidly and started to slide off the top bunk with the predatory air of a panther. “Garcia, sweet man, who have you brought to visit me?”

“New cellmate.” The guard—Garcia?—stepped back through the door and quickly removed Elias’s cuffs before shoving him forward toward the Santa Fe Slayer’s approach.

Elias looked desperately back at the guard as the thick steel door clicked shut. It beeped as it locked. A small, barred hole at eye level revealed that Garcia had already turned away.

“Hughes,” the man said, his voice pleasantly deep and drawling but edged with something unpredictable. Excitable. “Welcome to Hell.”

Elias clutched the bedding to his chest as if it might ward off attack, or maybe just because he needed to hold something.

This was why Edward Snowden ran. The government clearly sent Elias here to be murderated. Well, if he was lucky, he’d be murdered before this dude started to eat him.

Though he wasn’t even conscious of moving backwards, his heels hit the closed door behind him, leaving him nowhere to run.

In some ways, it reminded Elias of his first day in juvie, when he’d been so terrified, but at least then he was of comparable size and flexible enough sexuality to avoid becoming a target.

Taking a deep breath, Elias tried to collect himself, put on a brave face, and lifted his chin proudly. “Do you prefer being called Hughes? I mean, if it was me, I’d want to be called Slayer. Or Hannibal or something. Not that you probably need a badass nickname, I guess.”

Awkward since the man just kept watching him, Elias gathered his bedding in his left arm and offered his hand to shake. “I’m Elias or Stuyvesant, or, you know… whatever.”

Hughes stared at him, dark eyes glinting dangerously in the low light. Something was wrong with his face, though it was hard to tell with how dim it was, but the texture was wrong, too reflective, scarred. He cocked his head to the side and said, “Maybe I’ll call you Bitch. Do you answer to that?”

“Um, well, I guess I could, but… um…” Great. So they were already going there. He was being fed to this Freddy Krueger motherfucker and there wasn’t a lot he could do about it. “I mean, this is prison. Won’t there already be a lot of people responding to that name? Wouldn’t want to step on any toes or cause confusion.”

What am I saying?

On the bright side, if he pissed this guy off, he might die quick.

In the silence, Elias was aware of Hughes’s shoulders shaking as his breathing turned choppy. Then, with mingled relief and horror, he realized Hughes was laughing at him.

“Stuyvesant then. No one else will carry that moniker surely.”

Thursday Euclid (he/him) is the m/m romance pen name of Rainbow Award winning author Will Craig, a thirtysomething disabled, fat, white, queer trans man from Houston, TX. For those who care, he is an Aquarius, and if you’ve met him, you probably can’t imagine him being anything else.

Proud da to two incredible queer, nonbinary kids aged 16 and 18 and honorary da to a 17-year-old black trans girl, Thursday spends a lot of time cooking vegetarian food in his Instant Pot while listening to Radiohead and dishing out advice and hugs to the younglings. Many of those scorching sex scenes were written or edited while obnoxiously loud teenagers danced to BTS in the living room.

When he’s not playing World of Warcraft with his handsome trans boyfriend, he’s probably watching horror movies or talking to his best friend and frequent collaborator Clancy Nacht.