Release Blitz: This Is The Circle by Tash McAdam

In the middle of two wars, including one that they didn’t want and didn’t ask for, the Psionics of ARC struggle to turn back the Eaters. The Institute is still waiting for an opportunity to regain control of the city, but right now there are more pressing concerns. Outside the Wall, chaos reigns, and the slums are overrun. Citizens and dwells alike are panicked and rioting. Cassandra hides in Epsilon 17’s body, convincing those closest to her that everything is normal as she pieces together plans to escape in the confusion.

But when the Eaters take her, Thea manages to regain control. The tables have turned. Now she has to pretend to be Cassandra to survive—but fortunately her time in the Institute prepared her well. If she tries to flee, she’ll be killed, but if she stays with the cannibal hordes she’s bound to be discovered. Escape seems impossible, but help—and friendship—comes from an unlikely source.

Toby and Serena have their hands full fighting the invading Eaters and trying to track down leads on where Thea could be. Cut off from his twin, Toby’s relationships with ARC deepen and grow, but he’s consumed by his guilt and his need to find Thea.

The cannibal threat looms ever closer, and with one of their best weapons either lost or disabled, ARC has to decide what their priorities are. Should they try to kill her, or save her?

This is the Circle
Tash McAdam © 2019
All Rights Reserved

They’re coming over the wall, Serena pushes the thought to me as we duck into a doorway, looking for our next targets. People are running and screaming, I see a toddler dashed out of his mother’s arms, grabbed by an invisible hand, and send a puff of telekinesis out to catch him, whisking him out of danger and back safe onto her shoulder. A scream of frustration rings in the empty air.

The woman doesn’t know what happened, but she takes her child and keeps running. The streets are clearing now, the gates shut to keep the attackers out, cutting off the flood of dwells. I can’t help but think they’d be safer if they’d all stayed outside. The Eaters are here; they’re in the City, but we can’t see them.

I desperately try to comm base, but everything’s down, my datapad blinking uselessly as it tries to connect.

Serena marks two falling shapes that are invisible to me as they tumble down the huge white edifice. They’re using their power like parachutes, skidding their feet down the surface of the wall and wafting their telekinesis above themselves, slowing their descent; it’s unbelievable. Via our hand-to-hand connection I get a faint impression of Serena skidding down a wall by herself, long ago, young and scared, with devastation woven into the heart of the memory. She digs her nails into my hand, jogging me out of the private moments she didn’t mean to share, and points our joined hands at the first descending Eater.

I send out a burst of power, flatten the body-snatcher against the massive white blocks of steel-hard stone, feel his bones break, and his scream of pain reverberates through the air. Serena yanks the other attacker down, but he…no, she, flips in the air and lands on her feet, dodging into the panicked shapes before Serena can keep track of her.

A massive figure shunts refugee bodies aside like a battering ram—Tudor: he can see them, just like Leaf could in the desert—and heaves upward. The woman Serena lost sight of flickers into view for a moment, and Tudor hammers a huge fist into her chest. Everything is so sharp and clear in my vision. I see her rib bones bow inward, snap. Battlesight, Serena crows, adrenaline pounding through her, making her forget the deaths around us and focus only on the joy of war.

Together we race toward the fading trail of another invisible attacker as they sprint down a street after the fleeing crowds. They want the children, Serena sends to me, her inner voice shocked and disbelieving. I caught it on her before Tudor took her down; they’re here for the kids. The powered kids, she means. I feel it.

Why? My feet smash into the pavement. I wish these boots were older, broken in, the tight synth-leather making my strides just a touch uncertain on the slippery solar panels.

You should try doing this in the rain, Serena jokes, not knowing the answer to my question. Then we’re on the escaping Eater and have to focus. She reads and finds his feet for me, bare, soles like hide but used to hot sands not smooth glassy surfaces. I thread a noose of power around his ankle, ready to trip him. But I forgot what they can do with an open line, and I gasp as he yanks on the tendril I sent toward him. He pulls a gob of power right out of my chest, absorbing it with a shuddery cry I can hear with my mundane ears, not needing Serena to read it and pass it to me.

I stagger, almost falling with the shock of it, but Serena catches me with a strong hand around my belt, saving me from a nosedive onto the ground. Toby. It’s a cry, thick with fear, but I’m okay. I let go of the power and let him take it rather than try to keep the connection open and fight him for it. I don’t know how to do that, and the memory of my twin taking everything out of me is still too fresh in my mind to want to try.

I’m good, I spit it, finding my balance and yanking Serena along, urging her to look for our prey, but he’s disappeared, and she can’t find him. If they want the kids, they’ll be at ARC, I realize and share at the same time, and Serena blanches. 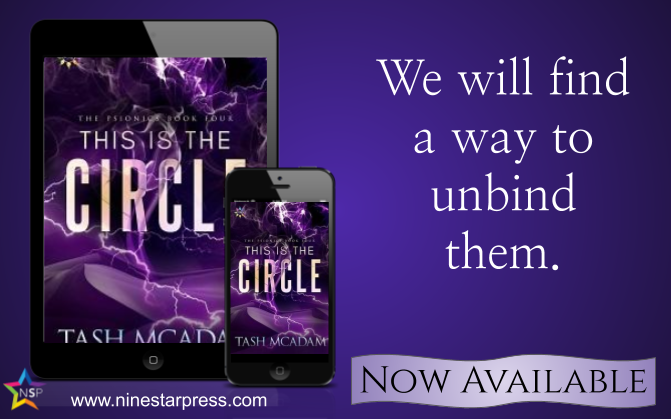 Tash is a 30 year old teacher candidate at UBC in Canada, although they were born and raised in the hilly sheepland of Wales (and have lived in South Korea and Chile before settling down in Vancouver). Tash identifies as trans and queer and uses the neutral pronoun ‘they’. They’re also an English teacher and fully equipped to defend that grammar! They have a degree in computer science so their nerd chat makes sense, and a couple of black belts in karate which are very helpful when it comes to writing fight scenes.

Their novel writing endeavours began at the age of eight, and included passing floppy discs back and forth with a friend at swimming lessons. Since then, Tash has spent time falling in streams, out of trees, learning to juggle, dreaming about zombies, dancing, painting, learning and then teaching Karate, running away with the circus, and of course, writing.


They write fast-paced, plot-centric action adventure with diverse casts. They write the books that they wanted to read as a queer kid and young adult (and still do!)