Blogtour: A Wedding In December by Sarah Morgan

A Wedding In December 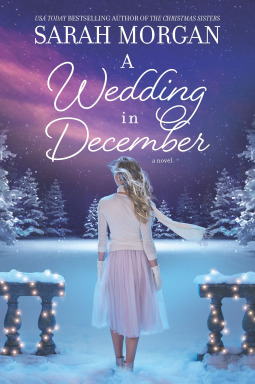 In the snowy perfection of Aspen, the White family gathers for youngest daughter Rosie’s whirlwind Christmas wedding. First to arrive are the bride’s parents, Maggie and Nick. Their daughter’s marriage is a milestone they are determined to celebrate wholeheartedly, but they are hiding a huge secret of their own: they are on the brink of divorce. After living apart for the last six months, the last thing they need is to be trapped together in an irresistibly romantic winter wonderland.

Rosie’s older sister, Katie, is also dreading the wedding. Worried that impulsive, sweet-hearted Rosie is making a mistake, Katie is determined to save her sister from herself! If only the irritatingly good-looking best man, Jordan, would stop interfering with her plans…

Bride-to-be Rosie loves her fiancé but is having serious second thoughts. Except everyone has arrived—how can she tell them she’s not sure? As the big day gets closer, and emotions run even higher, this is one White family Christmas none of them will ever forget!

When her phone rang at three in the morning, ripping her from a desperately needed sleep, Maggie’s first thought was bad news.
Her mind raced through the possibilities, starting with the worst-case scenario. Death, or at least life-changing injury. Police. Ambulances.
Heart pounding, brain foggy, she grabbed her phone from the summit of her teetering pile of books. The name on the screen offered no reassurance.
Trouble stalked her youngest daughter.
“Rosie?” She fumbled for the light and sat up. The book she’d fallen asleep reading thudded to the floor, scattering the pile of Christmas cards she’d started to write the night before. She’d chosen a winter scene of snow-laden trees. They hadn’t had a flake of snow in the village on Christmas Day for close to a decade. They often joked that it was a good thing their last name was White because it was the only way they were ever going to have a White Christmas.
She snuggled under the blanket with the phone. “Has something happened?” The physical distance between her and Rosie made her feel frustrated and helpless.
Everyone said global travel made the world smaller, but it didn’t seem smaller to Maggie. Why couldn’t her daughter have continued her studies closer to home? Oxford, with its famous spires and ancient colleges, was only a few miles away. Rosie had done her undergraduate degree there, followed by a master’s. Maggie had loved having her close by. They’d taken sunlit strolls along cobbled streets, past ancient honey-colored buildings and through Christchurch Meadows, golden with daffodils. They’d followed the slow meander of the river and cheered on the rowing crews. Maggie had hoped, privately, that her daughter might stay close by, but after Rosie had graduated she’d been offered a place in a US doctoral program, complete with full funding.
Can you believe it, Mum? The day she’d had the news she’d danced across the living room, hair flying around her face, twirling until she was dizzy and Maggie was dizzy watching her. Are you proud of me?
Maggie had been proud and dismayed in equal measure, although she’d hidden the dismayed part of course. That was what you did when you were a parent.
Even she could see it was too good an opportunity to turn down, but still a small part of her had wished Rosie had turned it down. That transatlantic flight from the nest left Maggie with email, Skype and social media, none of which felt entirely satisfactory. Even less so in the middle of the night. Had Rosie only been gone for four months? It felt like a lifetime since they’d delivered her to the airport on that sweltering summer’s day.
“Is it your asthma? Are you in hospital?” What could she do if Rosie was in the hospital? Nothing. Anxiety was a constant companion, never more so than now.
If it had been her eldest daughter, Katie, who had moved to a different country she might have felt more relaxed. Katie was reliable and sensible, but Rosie? Rosie had always been impulsive and adventurous.
“I’m not in hospital. Don’t fuss!”

USA Today and Sunday Times bestselling author Sarah Morgan writes romance and contemporary women's fiction and her trademark humour and warmth have gained her fans across the globe. Sarah lives near London, England, and when she isn't reading or writing she loves being outdoors.