Thank you so much for hosting me at My Fiction Nook on my blog tour for the release of my YA novel, Owl. I’m incredibly excited about this book and to be sharing it with the world at last. I’ve been writing about my owl shifting character Gabriel for several years now, and the more I wrote, the more fun I had learning about him and Vin, the human he dares to become friends with.

Much of the setting of the book is based on where I’m lucky enough to live every summer. My family owns a camp on the shore of Lake Champlain in Vermont, and I spend a lot of time every year out in my kayak. Vin is an avid kayaker, and he has explored the rocky shoreline around his home as closely has I have explored around my camp. I had him describe one of my favorite places—a large rock that sticks out over the lake surface with a cave underneath it. It looks just like a turtle, with the cave entrance between its two front legs. When I was first plotting out Owl, I had no idea just how big a role the Turtle would come to play in it.

The excerpt below is important because it describes the first time Vin shows the Turtle to Gabriel. The book is told from Gabriel’s point of view. At this point, Gabriel has been trapped in owl form for three years, and he’s aware that his humanity is slowly slipping away. This theme, like the Turtle itself, becomes increasingly important as the book goes on and Vin’s and Gabriel’s relationship becomes deeper, and more dangerous. 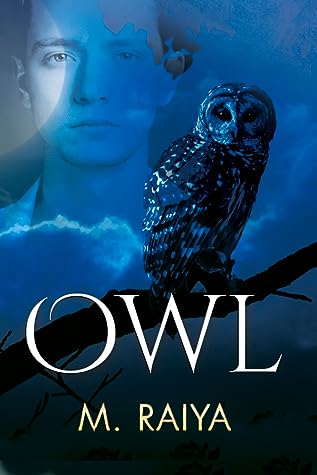 Gabriel made a decision to help a friend, and it cost him. He’s been exiled from his clan, trapped in his owl form, living in a swamp, and slowly losing his humanity. If not for Vincent, Gabriel would have no chance of regaining what he lost.

Vincent is popular and successful, but no one knows the real him, who is gay and would rather become a musician than a lawyer… no one but the owl living in the hollow tree. As Vincent shares his secrets, he not only unburdens his heart, but stirs Gabriel’s. In each other they have a chance to heal… to live.

Unless Gabriel’s grandfather has his way.


We were out on the lake in Vin’s kayak at dawn the next morning. It was wonderfully warm and cloudy and misty and still. In the distance a loon called, mournful and mysterious. The only other sounds were the gurgle of water against the rocky shoreline, the engine hum of a fisherman farther out, and the rhythmic plunk plunks of Vin’s paddle. I perched on the bow amidst the folds of a brown towel which appeared like Vin had casually tossed it there. From a distance it would be impossible to tell that part of the towel was a really an owl, at least not in this light. No one would believe an owl would be riding around on the bow of a kayak, so no one would see an owl. I knew how people’s minds worked. Look how much that towel looks like an owl, honey!
Vin took us along the shoreline. Soon after the small development that his house was part of, the shore turned rocky and rose into a weathered gray cliff twenty feet above the water. Tenacious cedar trees lined the top, some even growing out of the bare rock part way down, held in place by roots that reached through cracks until they found earth and water. I couldn’t imagine how old those trees must be. I suspected they’d been there when European colonists lived where Vin’s house now sat.
“See that rock?” Vin nudged me with his toe and pointed at a formation jutting out of the cliff at the water’s edge. “It’s got a cave under it. I call it the Turtle.”

It did look a bit like a turtle, with a big domed head between two strong front legs. Underneath the head was the small, dark opening of a cave, half filled with water. I’d flown up and down the shoreline a lot, but I’d never seen it at this angle or noticed the cave. Impulsively, I took wing and flew closer.
“Be careful!” Vin called after me.
I wasn’t stupid enough to fly into that small a cave. I could feel cool, dark air inside and sensed that the space widened out beyond the narrow opening, but I wasn’t about to risk getting trapped in there should a motorboat wave come out of nowhere. I liked being able to breathe.
I lit on the turtle’s head and looked down at Vin. He couldn’t resist pulling out his phone and taking my photo. Ham that I was, I opened my wings and let him get a good shot before I soared back down to my towel.
“Nice,” he said, holding the phone out so I could see. “Don’t worry, I won’t put it on Facebook.”
I shuddered at the thought of someone from home seeing it on the internet and recognizing me. In fact, it probably wouldn’t be a good thing if he took any more photos. Having a bunch of shots on his phone showing that an owl was following him around could raise some questions if anybody saw them. I gave the photo a quick glance, then hopped closer and took a good look.
I stared. Damn.
“This is the first time you’ve seen yourself,” Vin said softly.
The screen timed out and went dark. I gazed over the water for a long moment. Last night I had written that I was losing myself. Looking into my owl eyes, I could see that. When I’d looked at other shifters, I could clearly see the humanness in them. In my own eyes, I saw mostly owl.
How much of me, I wondered, was already lost? Gone forever. Even if, as Vin seemed so sure he could manage somehow, he got the elan out of me, was there still enough human left? I’d already known I could never be who I used to be—the boy I’d been was long gone, lost in the cold of winter. But could I even be human again, at all?

M. Raiya is a Vermonter and splits her time between a home in the mountains and a camp on a lake, writing full time when she’s not taking long walks with her dog, swimming, kayaking, or birding, always with a camera in hand. M. Raiya’s novel Depth of Return won first place in the 2017 Rainbow Awards in the Gay Paranormal Romance category, and her novel Another Healing was a finalist in the 2015 Rainbow Awards.