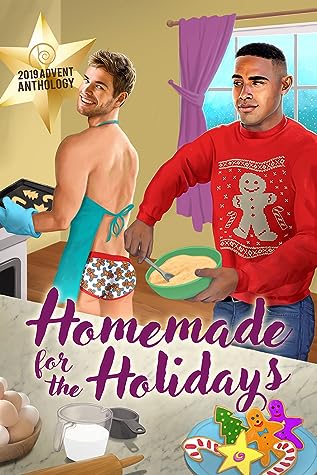 Choosing the right gift for that special someone can be the most daunting part of the holidays. In a sea of mass-produced items, why buy when you can DIY? The end-of-the-year festivities are the best time for crafts, whether they’re made from yarn, paper, flour, or even code. And with some love and luck, these special presents might inspire a romance that lasts an evening… or a lifetime. Nothing makes the season merry and bright like a gift handmade from the heart, and to bring smiles to the faces of the ones they care about, these guys are willing to get creative.


I read five of the short stories in this anthology and will review them all in one post.

Over much too soon, this was an adorable amuse-bouche from one of my favorite authors about a guy who's ex drunkenly put a hole into the wall of his house. Obviously, that's no bueno because family is coming for Christmas and that hole is gonna put a damper on things. The author did a fine job creating the characters and gave them just enough on screen time together to make the budding romance believable.

2. Setting For Eight, Dinner For Two by BG Thomas

Written in Ben's usual breathless style, this story has a bit of a fairy Godmother feeling as one man, shortly after the end of a relationship, is in the doldrums and needs a bit of a pick-me-up in the form of fabulous tableware for Christmas. He then meets an amazing artist who makes it this fabulosity and other awesome ceramics. This being the longest of the five I read, it's also slightly OTT as far as the "fairy Godmother" is concerned, but I could appreciate that character and the kindness and compassion she delivered. And while Charlie may have a table setting for eight, as planned and desired, the eventual dinner, for one reason or another, ends up being much more intimate than he anticipated and serves to further foster the romance that you can see beginning.

3. Purls Of Wisdom by Morgan James

This was probably my favorite of the bunch. I quite enjoyed the story about an ex-soldier turned yarn shop owner about to take a vacation and the virgin knitter who may not be as straight as our shop owner believes him to be. The characters were well drawn, believable, and realistic, and their romance, once the wrong assumption is resolved, was sweet and adorable. The side characters, especially the female friend assumed to be the wife, were also well done and fit perfectly into the story.

4. A Swants Soiree by EJ Russell


I had never in my life heard the term "Swants". Apparently that's a thing where you take a sweater and turn it into a pair of pants? Anyway, in this story one of our MCs is all "bah humbug" but the company he works for makes a big fuss at holidays, and he's expected to be a team player and participate, because yay, team. For Christmas, he's expected to buy an ugly Christmas sweater and turn it into a pair of pants to wear to the party. As you can imagine, it's not as easy as it sounds. He needs help, which is serendipitously provided by our other MC, who just happens to have a bunch of sweaters available, for reasons. Attraction is swift, and then Christmas magic happens. This was a fun story.

5. Silver And Solstice by TJ Nichols

This is a fantasy story where Elves and Humans and Cat Shifters all live in a big city, in a kingdom, more or less harmoniously. The cats are forbidden to shift inside the city unless they have been collared by a human or elf as a pet or suffer the indignity of shifting inside a cage, displayed for the public. This was a really interesting world the author built with just a few words, and while I would have liked to get a wee bit more of the two MCs, I thought that even in such a short story, the author surely packed a punch. I wasn't even mad that we didn't get to actually see the confrontation that is sure to ensue at the dinner - at the time the book ended, the main points had all been made.

And there you have it. This anthology usually has something for everyone. Give it a try.


** I received free copies of the stories I read from the publisher in exchange for an honest review. **

Get the whole anthology: