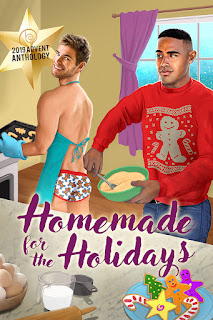 
Choosing the right gift for that special someone can be the most daunting part of the holidays. In a sea of mass-produced items, why buy when you can DIY?

The end-of-the-year festivities are the best time for crafts, whether they’re made from yarn, paper, flour, or even code. And with some love and luck, these special presents might inspire a romance that lasts an evening… or a lifetime. Nothing makes the season merry and bright like a gift handmade from the heart, and to bring smiles to the faces of the ones they care about, these guys are willing to get creative.


It’s long-haul trucker Eddie’s first Christmas away from home, and he picks up the CB radio in search of friendly voice. He doesn’t expect to reconnect with his old instructor—and brief but passionate fling—Colton. Eddie realizes the scarf he’s been knitting symbolizes the love and longing he’s been trying to deny. When fate brings them back together on a lonely, snowy stretch of Iowa highway, will they grab hold of their second chance and acknowledge the love woven tightly between them?

This short story about two long-haul truck drivers who reconnect on the road on Christmas Eve lacks character and relationship development. The men had a brief fling a few months back and apparently can't stop thinking about each other.

We get the perspective of only one MC (who's as flat as a pancake). There's a brief fade-to-black scene (just as well as I felt no passion or connection between the men), and the ending is a tentative HFN.

Nothing about this story says Christmas or romance.

Sean Edwards would do anything for his nephew, including designing the props for a children’s version of the Nutcracker. He’s ready for the long nights and weekends in the workshop—they’re part of the job, especially given the short notice. The insanely sexy head ballerino is completely unexpected, however.

All principal danseur Keni Jackson wants is to surpass last year’s performance, blow people’s socks off, and cement his place in the studio. The last thing he needs is something to shatter his carefully held control—like a cuddly carpenter who favors jazz over Tchaikovsky. Sean and Keni are drawn to each other, but not everyone is a fan of their relationship. When Keni’s position is threatened, they have to decide whether to walk away for good, or if what they’ve found is worth fighting for.

Kudos to the author for writing a story about two non-white MCs. I liked lthe dancing theme and the inclusion of Sean's nephew who danced in the same company (junior version) as Keni.

What this story lacks in relationship and character, it makes up in heat and heart. I just wish that contrived conflict hadn't been included.

When Nate Hawthorne meets Asher Dane, the huge, tattooed hunk is the personification of Nate’s dreams. But Nate knows there’s no future, because Asher is also the personification of his beloved five-year-old daughter Delly’s nightmares. She’s frightened of big men. Things turn around for both of them, however, when Delly goes Christmas shopping at the Fairy Shop and begins her quest for a wand that will make her brave. Neither of them guesses that the Fairy Shop will be the source of far more than Delly’s courage. On Christmas Eve, under the influence of a very unusual fairy, Nate’s life will change forever.

This story made me cranky on so many levels.

First, the way Delly's (Nate's 5-year-old daughter) trauma was explained, and then "cured," was simplistic at best, harmful at worst. I am no expert on childhood trauma, but I know that children don't get cured by magic wands and that Delly needed serious counseling pronto.

Second, Nate and Asher's relationship, if you can call it that, was based solely on sexual attraction. The two barely had a single conversation.

Finally, the magical elements in the story seemed entirely manufactured. I think the author was going for an ethereal quality, but I had so many questions: How did Asher support himself doing what he supposedly did for a full-time job? What in the hell was up with the magical workshop? What was the purpose of the homeless man and his wand? Was Asher really magical? Were the wands?

I'm not one to usually question a touch of magic, but nothing about this story gelled for me.

Uri Kessler is a bit of a klutz. Recently divorced from a guy he married too quickly and yearning to have a holiday that feels special, he decides to make Hanukkah candles. The results are literally a blazing disaster.

But Uri’s mishap helps him get to know Oscar Cortez, his sexy new neighbor, and the two men instantly hit it off. While Uri finds himself drawn to Oscar, he’s also afraid to make a mess of their budding relationship. It’ll take a small miracle to make things work between them.

Uri regrets making his own menorah candles. He's never been very crafty, and playing with fire leads to disaster. Fortunately, his neighbor Oscar is there to save him, even if Uri insists he doesn't need saving.

I liked this story, which mentions both Hanukkah and Christmas. We get some background information about the MCs, enough that I was hoping Uri would accept Oscar's invitation.

I did wish the ending hadn't been so rushed and tentative.

An ARC of this books was provided by the publisher in exchange for an honest review. Download links are provided as a courtesy and do not constitute an endorsement of or affiliation with the book, author, publisher, or website listed.