Confessions of a Gay Curmudgeon recounts the adventures of Viktor, a fifty-year-old gay man in New York City trying to get back into the land of the living after the breakup of a twelve-year relationship.

Complaining into his digital diary, Viktor wrestles with negotiating the dating scene, dealing with new corporate bosses, and his friends’ stories of sexual misadventures and taking him to places to meet eligible new partners who he doesn’t find very eligible at all.

Trying to distance himself from his family and immigrant roots to build a new life, he finds it easier said than done. And even his therapist doesn’t seem to understand him. But perhaps most important, his former lover Gio is on his mind.

Funny and moving, the novel examines the lives of a group of middle-aged gay men, exploring new facets of their sexuality while dealing with all the changes middle age brings.

My erections aren’t what they used to be.

Well, Dr. S told me to write about the first thing that comes into my mind, so it’s what I’m doing. “Don’t think. Just write,” he said. “Stop censoring yourself, Viktor. This will help you in your therapy too, Viktor.”

Okay, okay. If that’s what the shrink ordered, let’s see if this works. We’re supposed to listen to our shrinks, right? That’s their job, right? They know how to get us out of whatever fucking funk we’re in, right?

So here we go. I’m writing about the first thing that comes to my mind and it’s my erections. Here it is, a lovely Saturday afternoon, sun shining, snow melting, spring a’coming, a perfect time to enjoy life. And what am I doing? Sulking in my apartment obsessing about my cock.

Hell of a problem to have on a day like today, isn’t it? Shit, be honest, Viktor. You’re supposed to be honest with this writing thing, aren’t you? That was Dr. S’s other directive, wasn’t it? Honesty. He was full of directives last session, wasn’t he? Oh well, maybe I need some directives.

So where was I? Oh yes. Gorgeous day, shitty mood, focusing on my cock when I should be enjoying life.

Oh, come on. It’s not just about my cock. I know that. After all, I did my share of screwing around when I was younger. Not that I was the biggest stud around in my heyday, but during those few glorious weeks my sex life got going, I learned how to have a good time. Yes, I did! But then I met Gio and fell in love. And he fell in love with me. And we had twelve years of bliss—more or less—until he left me last year.

And I’ve been floundering ever since. Floundering? Ha! Flopping around is more like it. So I’ve been seeing Dr. S—ahem, Dr. Singsirinavin—I’ve been seeing him to help me out of this predicament. Seems like a nice enough guy, serious, quiet, with a scrawny body and a bit of an accent, though I’ll be damned if I know from where exactly. These shrinks never tell you anything about themselves, do they? I’ve been seeing Dr. S for a year already, and you would think by now I’d have an idea, but I don’t. To tell the truth, I don’t have much of an idea about anything, including whether he’s helping me.

But I’m trying. Goddamn it, I’m trying, you’ve got to give me that. Didn’t put all my eggs in one basket, either. Went to my primary-care guy too, to complain about my cock. Dr. Agnostulopolini. Different accent, different mystery country. Had to change doctors when my cheapo company switched insurances and I had to find someone new. He doesn’t know anything about me and doesn’t seem to care, either. Every time I ask a question, the side of his face twitches like he’s having a stroke. “Doctor,” I said last time, “my libido seems to have disappeared.”


“You know, it does fall off with age,” he says. Translation: you’re getting old.

“But not this suddenly, Doctor. Could it be the new blood pressure medicine you prescribed?” Translation: Fuck you. Don’t give me that you’re-getting-old shit. I’m fifty. That’s not old.

“This medicine shouldn’t cause a drop-off in libido.” Translation: I’m the doctor. I know what I’m talking about.

“But then what could be causing it?” Translation: Fuck you. I’m the patient. It’s my libido.

And on and on. Dr. A suggested other medications, maybe talking to Dr. S about an anti-depressant. Sure, pump me full of chemicals. Is that all the medicos care about? They want me docile and uncomplaining. As long as my numbers on their medical charts look good, they think they’re a success. No matter what I think.

Well, fuck them. It’s my life, and I’ll screw it up the way I want to. Not according to the way they think I should do it.

Oh, I have to stop complaining and get myself out of this funk. No one else is going to do it for me, least of all the good doctors. I know that. It’s my life, and I better get it going again before it’s too late! But how? How, fucking how? 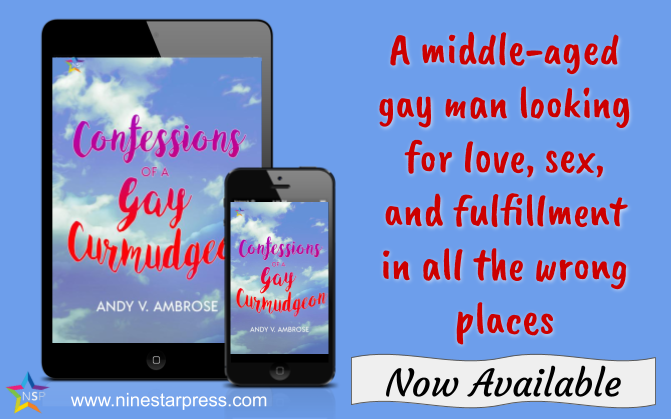 Andy V Ambrose grew up in the Boston area and moved to New York City after college. He worked in book publishing for many years, wearing many hats: Editorial, Copyediting, Proofreading, and Production. This is his first novel featuring Viktor, a fifty-year-old gay man trying to get back into the world of the living after the end of a twelve-year relationship. To relax, Andy loves to ride his bike, read, watch foreign and independent movies, and travel. He’s only made it to three continents so far but hopes to visit the rest soon. He lives in New York City.