Blogtour: Love You So Sweetly by Tara Lain

Reading his future in a glass of sweet tea.

Meet the Boys from LOVE YOU SO SWEETLY

Hi. I’m so happy to welcome you to the launch of my new romance, LOVE YOU SO SWEETLY. This is a real opposites attract story and to prove that I thought I’d offer up a brief character bio of my two lovers in the book.

I think you’ll enjoy all the opposites these men embody, as well as all the similarities. Thank you for stopping by to learn more about LOVE YOU SO SWEETLY. 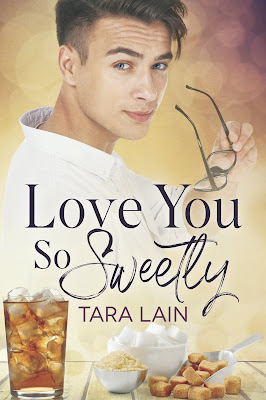 The youngest son of one of America’s richest families, Remy Merced is so busy trying to save his family company from collapse, he’s never taken time to figure out if he’s gay, much less if he’s happy. Then his meddling mama hires him an assistant who’s everything Remy thinks he doesn’t want.

Cute Harper Treadwell, from rural Arkansas, is a brilliant business prodigy… and openly gay. His wit and charm could confirm Remy’s suspicions about his own sexuality almost instantly—if they weren’t both already partnered.

When Remy’s girlfriend and Harper’s boyfriend get a little too friendly, Remy finds that the path to happiness requires a long drive in an old Prius, a growing appreciation for small towns, and a whole lot of sweet tea. But before they can forge a future—they have to let go of the past.

But he and Felicity hadn’t had sex in weeks. Shouldn’t he have a set of horns that would put Dasher, Dancer, and Prancer to shame? Hell, he was in his twenties. Even if he was sleepwalking, shouldn’t he be ready to stick his cock in anything female that passed within five feet of him? Wasn’t that the way most guys felt? Shit, these questions haunted the back of his brain all the time while the front worried about the business. And it wasn’t like he didn’t know why it worried him.
He sipped coffee and glanced at John Jack, who was smiling at his wife with open lust. It’d be nice to have somebody he trusted to tell him straight if he was undersexed or asexual, or…. He sighed softly. But he and John Jack didn’t have that kind of relationship. John Jack was seven years older and was more a product of Arkansas than California. He put a lot of store in “being a man,” and Remy was scared of what John Jack would say if Remy tried to get personal. Remy worked all the time, so everyone he knew was associated with the company, and since Remy was the boss, who the hell was he going to tell his troubles to?
His mama’s voice came from the direction of the kitchen, telling Nigel she’d like some more ice cream.
Felicity turned to Remy and leaned in. “I’m going to make my excuses. I’m too tired.” She put a hand on his arm. “Sorry, dear.” She kissed his cheek, rose, said a fast goodbye to Trudy and John Jack, and was gone before Mama even made it into the room.


Remy had a pretty good idea he shouldn’t be smiling.

Bk 1
LOVE YOU SO HARD

Bk 2
LOVE YOU SO MADLY

Bk 4
LOVE YOU SO SPECIAL

After many years living in southern California, Tara, her soulmate honey and her soulmate dog decided they wanted less cars and more trees, prompting a move to Ashland, Oregon where Tara’s creating new stories and loving living in a small town with big culture. Likely a Gryffindor but possessed of Parseltongue, Tara loves animals of all kinds, diversity, open minds, coconut crunch ice cream from Zoeys, and her readers. She also loves to hear from you.