Blogtour: The Evolution Of Love by Philip William Stover

The Evolution Of Love

When a charming but misguided account manager gets stuck on a cruise to the Galapagos Islands with his hunky zoologist ex, he might rediscover his true passion—in and out of the bedroom.

After art school, Mike Davis gave up on his dream in favor of a stable job. But when he gets an opportunity to teach wealthy travelers how to paint stunning sunsets, it seems like the perfect break. Until he finds out he’ll be sharing a suite with his ex, charismatic Benton Aldridge—a British scientist cuter than the baby animals he studies. Mike makes it clear he has no intention of getting back together with Benton, but sharing a suite makes it almost impossible keep his distance.

As they climb over volcanic peaks and swim with manatees through sparkling jade-colored water, can they also heal past wounds and take the next step in the evolution of love?

I’m a great flyer. I love being up in the sky and having all that free time to read or nap or watch movies I would never watch at home. My husband, not so much. He loves to travel but he hates everything to do with flying and especially being thirty-thousand feet in the sky. I was thinking of him when I wrote this excerpt from “The Evolution of Love” although he would never take anything stronger and an Advil. 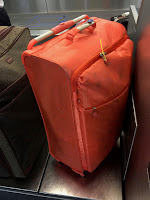 A quick travel tip: take a picture of your luggage just as you are about to check it. If anything happens to your bag, you’ll have a picture of it right there on your phone.

I’m thrilled to be a part of the Worlds of Love collection because these books are so much like the romances I read growing up. I learned about the world through series romance that spanned the globe. I never thought I would eventually travel around the world with my husband and write stories based on the places we have seen.

I hope you’ll take a trip with me to Ecuador and the Galapagos Islands. The scenery is beautiful and there is no better location for a kiss then the deck of a cruise ship as sunsets beneath inky waters.


Chapter 3
I’m not a good flier. People say it’s a control issue. I don’t think so. I think it’s a dropping-thirty-thousand-feet-out-of-the-sky issue. Penny, who left a day earlier, managed to upgrade my ticket to business class, but I still have to transfer in Miami. I board the plane with my Kindle loaded with every book, magazine, television show, movie, and game I could every possibly want, a neck pillow recommended by an orthopedist friend, noise-cancelling earphones that cost almost as much as a used car, an eye mask infused with lavender, and my most valuable possession at the moment, a fresh bottle of the most adorable little blue sleeping pills.
I’m not a big drug user. In fact, I hate taking anything stronger than Tylenol, and even that I usually take in children’s liquid, but desperate times, etcetera. It’s an almost ten-hour flight to Quito from start to finish, with a change in Miami. We don’t land until after midnight, and the only way I can get through it is with a little help from Auntie Ambien. I’ll take one on the flight over and one on the flight back. No big deal. Some people report memory loss or strange sleepwalking behaviors, but that has never happened to me. I just sleep like a little baby wrapped in a warm blanket.
I settle into my comfortable leather seat, and a pert flight attendant offers me a glass of champagne to welcome me aboard. I’m not sure I’m supposed to mix alcohol with these pills, but I smile to thank her and say, “Don’t mind if I….”

Holy crap. Where am I? I’m wearing my headphones around my right thigh, and my neck pillow is perched on my head like a tiara. My lavender-scented eye mask is around my mouth. The last thing I remember is thinking the champagne can be deceptively strong because of the bubbles and that I should not take my Ambien with alcohol, but even that memory is fuzzy.
I hear boarding announcements and see jets parked outside the windows. I am in an airport? I take my neck pillow off my head and make out the words Miami International Airport on a sign above me. For a second I think, Oh boy, I’m going to visit the Golden Girls.
“There you are, Mr. Davis.” A young woman with a sloppy French braid smiles at me. “Remember me? I’m Lisa.”
“Lisa?” This woman in a flight attendant uniform is a complete stranger to me.
“That’s right,” she says, speaking to me like I’m a lost a child, which I am at the moment. “I was your flight attendant from San Diego.”
“You were?”
“Yes. Actually, you told me I was going to be your best friend for life if I landed the plane safely. Then you stood in the aisle, said you were Whitney Houston’s Irish cousin, and sang ‘The Greatest Love of All.’ You have a lovely singing voice.”
This sounds vaguely familiar, but I am too foggy to know.
“You need to get in that line over there.” She points to a gate a few yards away that says the flight is departing for Quito. Quito sounds familiar.
Another woman in the same exact outfit is with her… or am I seeing double? I’m not sure.
“This is my colleague, Olga. She’s going to make sure you get to Quito. Nice meeting you, and thank you for French braiding my hair after the dinner service.”
Huh?
Olga says more words and puts me in a line I am to follow until I’m on the plane. I think my head and my blurred eyesight are slowly clearing. I look around the terminal and see a mother on her knees cleaning up some crackers her toddler has spilled, two guys fighting over a USB port, Benton reading a book, and a woman talking to her dog in a carrier.
Wait, what?
I scan the seating area of the gate again. Toddler, USB port, Benton, dog.
No. There is no way he is in the Miami airport. He’s in Queens. No, not Queens. He is in the place with the Queen. England. He’s in England. I’m having a hallucination, but that guy really looks like Benton—same perfect jawline, same gorgeous face. What am I talking about? It’s the Ambien. I’m not even here. I’m not even me. I’m Whitney Houston’s Irish cousin.

Philip William Stover splits his time between Bucks County, Pennsylvania, and New York City. He has an MFA in writing and is a clinical professor at New York University. As a freelance journalist, his essays and reviews have appeared in Newsday, the Forward, the Tony Awards, the Atlanta Journal-Constitution, the Houston Chronicle, the Milwaukee Journal Sentinel, and other national publications. For many years he ghosted for an international best-selling women’s fiction author. He has published multiple middle-grade novels for Simon and Schuster and was the American Theater critic for About.com.

His gay romance series set in New Hope, PA will debut with Carina in spring of 2020.

Philip grew up tearing the covers off the romance novels he devoured so he wouldn’t get teased at school. Now he enjoys traveling the world with his husband of over twenty years and would never consider defacing any of the books he loves.

He can be found on social media as Philip William Stover and at his website.