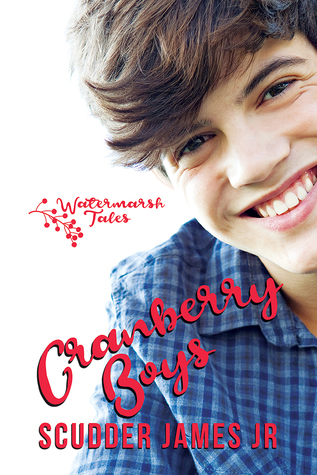 Is it possible to have it all—even for a boy from a dying town of old cranberry bogs? Even for the son of religious zealots who will never accept his being gay? Even if his closeted boyfriend will never acknowledge their relationship and dates girls to distract people?

Sixteen-year-old cross-country runner Zeph hopes so, because he isn’t giving up on his happily ever after. He has big plans for life after high school and for his relationship with Connor… even if Connor insists they keep it secret.

Then Bronson, an old friend of Zeph’s, returns to Watermarsh after being kicked out of boarding school with secrets of his own in tow. But they keep their eyes on the prize and start a blog to impress colleges who often dismiss small-town students like them.

But not even Zeph can run from everything as his home life implodes and the love triangle he’s stuck in with Bronson and Connor begins to crumble. He’ll do whatever it takes to hold on to hope—even if it means a covert trip to Bronson’s old prep school.

Yup, I’m one of those people who has always wanted to be a writer. I remember asking babysitters what classes I should take if I wanted to become an author. In high school, I started an editorial newspaper. But in college I did what my family expected and became an economics major, even though I’ve never been a numbers or a how-the-system-works guy.

A college boyfriend once told me I should take a writing class. (Probably the best thing from that closeted, doomed relationship.) He’d taken the class and insisted I’d love it. He assured me I could convince my father that writing was good for business. I did, took the class, had fun, and got accepted into the creative writing major. The undergrad literary journal published one of my pieces. I’d found my groove.

So why did it take almost a decade after graduation to get back to writing? Back then, I was convinced I’d had too much good luck – safety, good schools, good health, travel, and the excellent guy I met after the doomed one. (Excellent Guy and I are married now.) I’d been lucky and wanted to pay the world back, so I volunteered and then worked as a counselor for refugees. It opened my world in ways I couldn’t have imagined.

But writing and I kept finding each other. For my job, I recorded stories how refugees were making new lives in the United States, then I became public relations guy at an international organization for students who were disabled. Eventually, I began telling my own stories in film and shorts. Cranberry Boys is my first novel.

Why Cranberry Boys? I enjoy showing that happiness is everywhere. Even in towns of dying dreams. And schools of overwhelming abundance. Even in the chronically uptight, in the uber-cool, and everyone in between. But tough stuff is also everywhere. How do we get lucky?

The longer we live, the more we learn about ourselves and the better decisions we can make. We can look for help. We can learn to be committed to who we really are, whatever that means for us. In Cranberry Boys, two guys in the love triangle find happiness. The third will in his own time. It might take a sequel, but he’ll get there. We all will.

By the time Connor made it to the locker room, everyone else had hit the showers, but I was going slowly, still pissed and still at my locker with only a towel around my waist. Connor and I were alone. He stepped closer than he had in a month. I felt his heat, smelled his sweaty race. A pang shot through me—I’d missed Connor’s muskiness.
“I saw you,” muttered Connor.
I shut my locker and tried to get around him.
He blocked me. “Why do you have to ruin everything?”
“You think I’m the one ruining everything?”
“We’re apart now so we can be together later. Don’t you get it?”
“No, Connor. You don’t get it. This is no way to live.”
Connor pressed his shoulder against my chest, pinning me to the locker. His sweaty skin against my sweaty skin was like an electric charge through my body. His voice rumbled against my cheek. “You shouldn’t be seen alone with Bronson.”
I tried to step away, but Connor blocked me.
“I saw you leaving Stephanie’s show. Why was his arm around you? Why was he touching you?”
“Connor, this is stupid.”
“I am not stupid. I saw you two.”
“Why do you care? Are we even still together?”


“Why would you say that?”
“We’re acting like we’re finished.”
“It’s just acting.”
Connor’s sweat dripped to the floor. His face was a combination of scared kid and pissed-off sixteen-year-old.
“Connor, wouldn’t you like it if we were finished? Done. Then, you’d be safe, no secret. No worries. That’d be good news. Like we never even happened.”
Connor punched the locker beside my head. Metal bent and echoed. The nearby showers hissed. He loomed beside me, his body taut.
I had no idea how to fight. I’d never punched anyone. Never been punched. But I wasn’t nervous. It was only Connor.
“Are you serious?” was all I said.
He punched the locker to the left of my head, then the right, then left, then right, slamming, slamming, and he kept going, kept slamming, and I didn’t move my head, and he never touched me, but the slamming metal by my ears was the loudest thing I’d ever heard. The wind from his fists cooled my face. He kept punching and punching, metal crunching. The louder it got, the further inside myself I went.
“Dude!” Westy ran from the showers. The rest of the team followed. Westy yanked Connor away.

Scudder James Jr believes happily ever after begins today. Junior high was terrible, boarding school better, and college the place he met the boyfriend he married (despite a pit stop in a fraternity). He started in finance because he thought he had to, but instead became a counselor for refugees, a fundraiser, and a teacher of sex and spirituality classes. After Chicago, Seattle, London, and Japan, he’s back in Boston where it all started. His favorite place to write has a harbor view of two colonial ships.

Scudder loves telling stories in print and on film. He’s thrilled that his short LGBTQ films have shown around the world in places as unexpected as Alabama and East Africa. Twenty years ago, he was diagnosed with a neurological disease that doctors are bewildered has disappeared. Scudder is an avid meditator and passionate about appreciating every moment.

One of his favorite mornings has been waking up on a boat in Patagonia with his perfectly imperfect partner and hiking an island of 130,000 penguins.