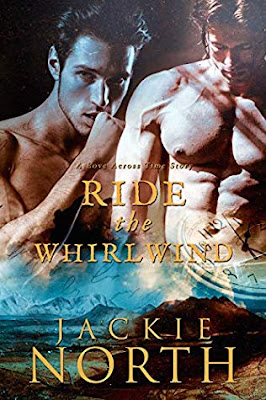 In present day, Maxton is good at finding trouble and bad at everything else.

In 1892, Trent Harrington, sheriff of Trinidad, Colorado, lives a respectable but lonely life, devoid of any closeness.

Trying to escape a past that keeps chasing him, Maxton drives south to avoid getting arrested. When his car spins off the road, he is swept up in a desert whirlwind and finds himself in the year 1892. Lost and alone, unused to the laws of the wild west, Maxton gets arrested anyway.

Trent is tasked with escorting Maxton to Trinidad. The request isn't unusual, but the miscreant is. Maxton draws Trent's heart out of its shell with his flashing green eyes and lush head of hair. It isn't right. It isn't natural. It's illegal. Yet Trent cannot resist the impetuous young man.

As the two men travel through the vast, empty desert to their destination, will they find in each other the love and companionship they never thought they'd have?

Ride the Whirlwind is the third Love Across Time book set in 1892 New Mexico. I strongly suggest reading at least the second book (Laurie and John's story) in the series prior to reading this one. (The first book is a standalone.)

Maxton is Laurie's roommate and receives two letters Laurie sent in 1892. Once Laurie's friend Zach disappears (Zach and Layton's story, book 3), Maxton becomes a person of interest in the ongoing police investigation. A former foster kid, Maxton is no stranger to being in trouble with the law. He's got the police hounding him on one side and the gang he's working for on the other.

For Maxton, 1892 signifies a new beginning.

Unfortunately, the day Maxton sets foot in 1892 New Mexico, he's arrested. Trent is sent to pick him up and transport him to Laurie. Trent has no idea about Maxton's relationship with Laurie, but he hopes that maybe Maxton is like him, like (he suspects) the men at the hotel, and desires other men.

Trent is the calm and steady presence to Maxton's chaotic storm. Maxton is just waiting for someone to hurt him, but Trent surprises him time and again as the men travel along the Rio Grande to reach Laurie and John's hotel.

This is a quieter story than book 3 and almost entirely relationship focused. Maxton comes to trust Trent, and Trent holds Maxton is the present even as the whirlwind threatens to send Maxton back to the future. Trent literally and figuratively becomes Maxton's keeper.

Trent is my favorite character in this series. He's gentle and kind; his longing for a partner, someone to call his own, is poignant. I teared up anytime Trent mentioned his little yellow house. Trent loves his house, but the emptiness hurts and loneliness waits in every corner.

Maxton wants to be Trent's, but Trent is afraid. He's always hidden his nature and hates fabricating half-truths. He can't imagine finally having what his heart's desired for so long.

The steam is on the low end, which is perfectly appropriate considering the men's tender sexual exploration. Maxton is, after all, Trent's first everything. Trent is a little old-fashioned, a little shy, which was so utterly endearing, I just wanted to hug him.

The ending is a bit tentative but I definitely consider it a sweet HEA for Trent and Maxton.

"My plan is to buy you a rocking chair from Sears & Roebuck," said Trent, his heart lifting. "I've been thinking about it for days ...."

"We'll order it tomorrow," said Maxton ... "Then you and me can rock together. That'll be perfect, I think."